It is a common belief. After all, glaciers are a visible phenomenon and it all sounds logical.

As you know, I have written extensively about glaciers, (see the “glaciers” tab on the sidebar). But it is worth posting this potted history of them: 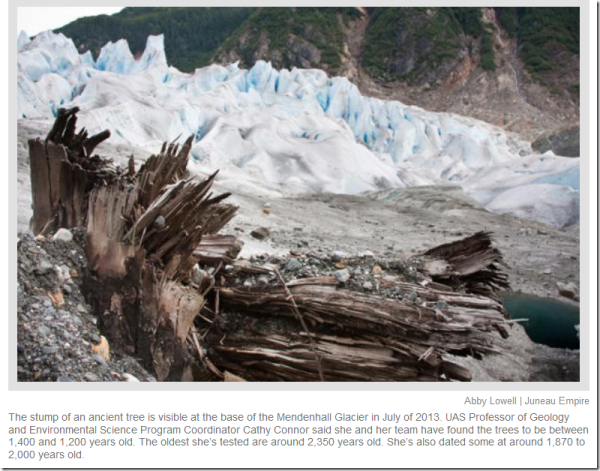 As glaciers recede in Alaska, scientists are finding the remains of forests previously buried by the ice.

Above is an example at the Mendenhall Glacier, where carbon dating reveals the trees are between 1200 and 1400 years old. Other older trees have also been found.

Exactly the same is happening elsewhere in Alaska, at the famous Exit Glacier, below. The trees there are a similar age:

These are not just odd trees, but the remnants of great forests. It is clearly evident that the glaciers then were much smaller than they are now.

And it is not only Alaska. At the other end of the continent in Patagonia, more buried trees are turning up, though these are younger, between 250 and 460 years old (See here).

A similar pattern can be found around the world, as the next section illustrates.

Beginning in the 16thC, Alpine glaciers began to advance down the valleys. We know this because of thee wealth of historical accounts from the time. This was of course the beginning of the period known as the Little Ice Age.

Historian Brian Fagan described in his book, The Little Ice Age, just what a horrifying calamity this was for those who lived there:

In the 16th Century the occasional traveller would remark on the poverty and suffering of those who lived on the marginal lands in the glacier’s shadow. At that time Chamonix was an obscure poverty stricken parish in “a poor country of barren mountains never free of glaciers and frosts…half the year there is no sun…the corn is gathered in the snow…and is so mouldy it has to be heated in the oven”. Even animals were said to refuse bread made from Chamonix wheat. Avalanches caused by low temperatures and deep snowfall were a constant hazard. In 1575 a visitor described the village as “a place covered with glaciers…often the fields are entirely swept away and the wheat blown into the woods and onto the glaciers”.

In 1589 the Allalin glacier in Switzerland descended so low that it blocked the Saas valley, forming a lake. The moraine broke a few months later, sending floods downstream. Seven years later 70 people died when similar floods from the Gietroz glacier submerged the town of Martigny.

As the glaciers relentlessly pushed downslope thousands of acres of farm land were ruined and many villages were left uninhabitable such as La Bois where a government official noted “where there are still six houses. all uninhabited save two, in which live some wretched women and children…Above and adjoining the village there is a great and horrible glacier of great and incalculable volume which can promise nothing but the destruction of the houses and lands which still remain”. Eventually the village was completely abandoned.

The same official visited the hamlet of La Rosiere in 1616 and found" “The great glacier of La Rosiere every now and then goes bounding and thrashing or descending…There have been destroyed 43 journaux of land with nothing but stones and 8 houses, 7 barns and 5 little granges have been entirely ruined and destroyed”.

Alpine glaciers, which had already advanced steadily between 1546 and 1590, moved aggressively forward again between 1600 and 1616. Villages that had flourished since medieval times were in danger or already destroyed. During the long period of glacial retreat and relative quiet in earlier times, opportunistic farmers had cleared land within a kilometer of what seemed to them to be stationary ice sheets. Now their descendants paid the price with their villages and livelihoods threatened.

Between 1627 and 1633 Chamonix lost a third if its land through avalanches, snow, glaciers and flooding, and the remaining hectares were under constant threat. In 1642 the Des Bois glacier advanced “over a musket shot every day, even in August”.

By this time people near the ice front were planting only oats and a little barley in fields that were under snow for most of the year. Their forefathers had paid their tithes in wheat. Now they obtained but one harvest in three and even the grain rotted after harvesting. “The people here are so badly fed they are dark and wretched and seem only half alive”.

In 1715 the village of Le Pre-du-Bar vanished under a glacier caused landslide. The glacial high tide in the Alps came around 1750 and gradually the glaciers began their retreat, much to the relief of the people who lived there.

Glaciologists also know that similar advances were taking place on glaciers all around the world, including Alaska, Greenland, the Canadian Rockies, South America, the Caucasus, the Himalayas and China.

Even New Zealand did not escape, Brian Fagan writes:

In New Zealand the Franz Joseph glacier was “a mere pocket of ice on a frozen snowfield nine centuries ago”…. Then Little Ice Age cooling began and the glacier thrust downslope into the valley below smashing into the great rain forests that flourished there, felling giant trees like matchsticks. By the early 18th Century, Franz Joseph’s face was within 3 km of the Pacific Ocean .

The high tide of glacial advance at Franz Joseph came between the late 17th Century and early 19th Century, just as it did in the European Alps.

We all know that the same glaciers which grew massively a few centuries ago are now retreating. What many people don’t know is that this process began around the late 18th and early 19thC.

Surprising though it might sound, explorers were already mapping Alaskan glaciers in the 18thC. The map below shows how the glacier edge progressively retreated after 1760. Most of the glacier had disappeared even before 1900, whilst glacier loss has been relatively small in recent years.

In the Alps it was a similar story. The Rhone Glacier reached its maximum extent in the late 18thC, and, according to HH Lamb, had already receded half a mile by 1870. Most had disappeared by 1950:

The modern day retreat of glaciers is part of a much longer natural cycle. Indeed, we find evidence of that cycle going back long before the Middle Ages.

Lamb, for instance, claims that glaciers in the Alps and Norway were advancing between 800 and 400BC, reaching an extent almost as great as during the Little Ice Age. They advanced again around AD600 to a similar position as before.

In between times, of course, the same glaciers also retreated, both during the Roman Warm Period and the Medieval Warming Period.

Whether man-made warming has played any part in modern glacial retreat, we know that:

All of this is common knowledge amongst glaciologists. But for some reason the world of climate science does not want the public to know.