Some claim that we don’t know how ivermectin works, but oh boy we do

Not only do we know how ivermectin protects us, we know many pathways in detail. Ivermectin is useful at every stage of the disease. In the early stages, it reduces the odds of people getting infected, stops the virus multiplying which reduces the viral load and the spread of the virus to your friends and family.  It helps our cells warn other cells and get ready for a viral attack. It stops the virus getting through the outside wall of our cells, and also stops parts of the virus getting into the headquarters of our cells, the nucleus, where our DNA is. It helps our cells send our warning signals to the cells around them.

As the virus tried to assemble itself inside our cells one of the processing tasks involves chopping long proteins into shorter parts. There are many enzymes involved but ivermectin binds to one key one called a Chymotrypsin like protease. Ivermectin also conveniently binds to two of the virus proteins as well (called Mpro and PLpro). Basically, ivermectin is the glue no assembly line wants.

With so many  mechanisms of action, it’s very difficult for the virus to outsmart ivermectin. It’s difficult for SARS-Cov-2 to mutate around multiple blocks at once. A viral mutation that gets around one pathway will be foiled by a different pathway. We needed a three-drug-antiviral-cocktail to beat AIDS,  but Ivermectin is an anti-viral cocktail all by itself.

In the bigger global battle, ivermectin will probably also stop the viruses which are mutating to get around the antibodies generated by vaccines.

Two researchers in Italy, Asiya Kamber Zaidi and Puya Dehgani-Mobaraki, published a paper detailing the 20 different levels of action. And it came out in May.

Ivermectin is the new penicillin, and we are killing people by banning it.

Currently, infected people are generating nastier variants because the vaccines are leaky — vaccines reduce the severity (at least for some months) but they don’t stop people shedding and transmitting the virus. We risk generating more deadly forms of Covid — just as we have unwittingly generated more deadly forms of Marek’s disease in domestic chickens by giving them leaky vaccines for the last 50 years.

All of this could stop, and all of this was known months ago. 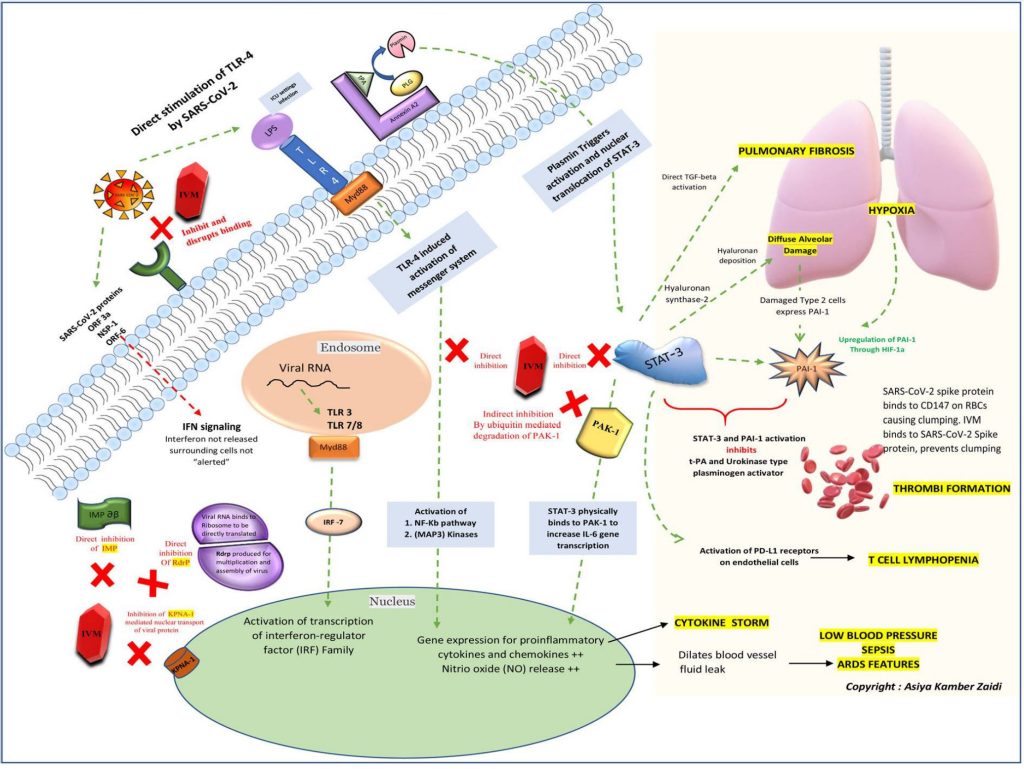 Zaidi, Mechanisms of Action, Ivermectin, SARS-2, Covid-19 (See below for the caption with all the acronyms listed in detail.)

Ivermectin binds to the spike (at leucine 91), but it also binds to our ACE2 receptors as well  (at histidine 378). It clogs up the lock-and-key from both ends.

When compared to Remdesivir, and hydroxychloroquine, ivermectin bound more strongly to the spike.

In this case “higher” means more negative. The higher it is, the more strongly something binds. Negative binding energies mean that binding is spontaneous, and doesn’t need an external energy source.

Ivermectin also binds to TMPRSS2 — it’s not a celebrity molecule like ACE2 — perhaps because someone didn’t think through the PR campaign and call it “Empress2” or something pronounceable  — but it is just as important. Apparently SARS-2 can’t get into cells which have ACE2 on the surface but don’t also have the TMPRSS2 enzyme there as well (Parmar 2021). Think of TMPRSS2 as a pair of secateurs wandering around the cell surface that need to prune the Covid spike before it can use ACE2 to get into a cell. TMPRSS2 is the not so catchy name for Transmembrane serine protease 2.

Ivermectin had the highest binding affinity for TMPRSS2. By binding so well to all three — the spike, the ACE2 receptor and the secateurs that prune or prime the spike, ivermectin makes it much harder for the virus to get inside a cell.

Once inside a cell, the virus gains access to most resources and tools to produce “baby viruses”, but the war has barely started. Some viral proteins will be sent like trojan gifts to get inside the cell nucleus — effectively the command centre. To get through the locked “gates” into the nucleus these proteins must get tagged by two labels called importin-α and importin-β   — they mark “the cargo” as something headed for the nucleus. But ivermectin alao binds to importin-α, again foiling the virus, clogging up the system and making it hard for SARS2 to send these proteins through the gates.

This is especially important because the nucleus will send out warning signals to other cells — and the viral proteins aim to stop that alarm system being triggered.

One of the first cytokines or messengers that a cell-under-siege sends out is called interferon (these names have a kind of Star Trek feeling, don’t they?). Interferon works like an air raid siren. When it reaches other cells, it triggers an array of downstream effects. Cells ramp up their wartime defenses, like for example, making particular enzymes they’ll need but generally slowing down the factories and machinery within them that make proteins. These are the same factories the virus wants to hijack and run at high speed to produce its own weapons and baby viruses. In effect, cells are sabotaging their own infrastructure temporarily, to buy time. Some white blood cells called natural killer cells, also respond to interferon.

This is such an important step for the virus there are at least three SARS proteins that antagonize or work against the interferon signaling system. If the virus can keep infected cells from releasing interferon, it can multiply unhindered for longer. This is all occurring during the early asymptomatic phase. Indeed, the interferon cascade will cause many of the symptoms that tell us we’re coming down with something — like the fever, the aches, and the “flu-like malaise”. Viruses that can slow this process, can stop us feeling sick and keep us on our feet — unwittingly shedding baby viruses to infect the guys in the office or the lady at the train station.

The delay in interferon production not only helps the virus multiply and spread, but also increases the proinflammatory cytokines that cause so much trouble.

Ivermectin is a multipronged anti-inflammatory

The Covid virus isn’t the only virus that attacks our interferon signally system, though it is a real hallmark of SARS-2, and ultimately the virus wreaks havoc with cytokines on many levels.  Luckily ivermectin also works on several parts of the immune network and mostly the effect appears to be to slow down the key amplifiers that tend to run off the rails in bad Covid infection. Sorry, immunology is acroynm-hell, so bear with me, you’ll get some idea of just how many pathways are affected. For starters, ivermectin slows down the Toll- like-Receptor-4 (TLR4)– these are ancient guards that have been around for a long time. They watch out for signs of spare parts of both bacteria and viruses and even just chemicals that are bad, and have a “pivotal role as an amplifier”.We need our TLR4, we just don’t want it to get “stuck on”.

Strap yourself in, there is so much more. Ivermectin also blocks the NF-κB pathway (Nuclear Factor-κB). It suppresses the Akt/mTOR signalling, which inhibits PAK1 which reduces STAT3 and IL-6.  STAT3 induces C-reactive protein (or CRP), so less STAT3 means less CRP. These are big names in the world of immunology. Your doctor measures your CRP as a sign of inflammation. People interested in living longer talk about the mTOR system  — it’s a is a kind of master controller for the whole cell cycle. Meanwhile IL-6, or interleukin 6 is another messenger that goes “inflammatory” in diseases like diabetes, depression, Alzheimers, and atherosclerosis.  Obviously, it’s better to face Covid without having “raised inflammatory markers” at the start.

Stopping at least one kind of coagulation

Because ivermectin binds to the virus spike at the right point it stops the virus sticking to the CD147 receptors of red blood cells. Each virus has about 100 spikes, so we can imagine how a swarm of viruses would work like a kind of malevolent velcro to agglomerate red blood cells into blobs that can’t pass through blood vessels. There are lot of other ways blood can clot, but ivermectin smooths this form.

The safety tests have already been done

If ivermectin was a new drug discovery, and we read this paper, we might be spooked that ivermectin is so intimately and intricately involved with our core biochemistry. Look at how many biochemical pathways it’s fiddling with? Wise researchers would warn that it may have significant unpredictable side effects and we should research it carefully — but the great news is that we’ve already done a lot of that testing. Thanks to 30 years of mass human use with 3.8 billion doses we know there are only a few situations where ivermectin is dangerous, and doctors know all about that. People can still do damage through overdosing. Doses always matter. Ivermectin can bind to our GABA receptors if it can get across the blood brain barrier. In normal healthy people the blood-brain-barrier is intact and and the drug is actively excluded. Doctors should be free to prescribe this “off label”. They know the doses.

The problem with Ivermectin is that it’s too good, and too cheap. No leaky vaccine should be used without an antiviral back up, but ivermectin is so effective that if it were permitted to be used, there would be no need for  the rushed emergency authorisations for experimental vaccines.

Immunology is alphabet soup. If I have vastly oversimplified, I trust commenters will correct me.

A schematic of the key cellular and biomolecular interactions between Ivermectin, host cell, and SARS-CoV-2 in COVID-19 pathogenesis and prevention of complications.