A scandal of epic proportions

The data in the UK is some of the best in the world, but if a person has a vaccine and dies in the next two weeks, it’s classed as an “unvaccinated death”. People are not counted as fully vaccinated until 14 days after their second dose, which makes sense if we’re only looking at Covid deaths. But ir doesn’t make sense when looking at other deaths. This delayed categorization leads to enigmatic effects, to say the least.

Strangely, the unvaccinated are increasingly likely to die from the week after other people in their age group get the vaccine…

The graph below of the 70-something age group in the UK, charts the non-Covid deaths — all the heart attacks, strokes, cancer and accidents. But notice how the first dose of Covid vaccines peaked in Week 5 (the grey dashed line), but the mortality of the unvaccinated (the blue line) peaks 2 weeks later? These are the non-covid deaths, so heart attacks, strokes, all kinds of things are killing the unvaccinated two weeks after the peak in vaccination for other people in their age-group.

Most 70-somethings who did get vaccinated, got their second dose around Week 15 (orange dashed line). Just as those jabs were going in, oddly people who had only had one dose began dying at an unusually high rate (orange line),  and their odd heart attacks and strokes or any cause continued for weeks through summer, a time when usually mortality rates are lower.

Strangely, the unvaccinated are more likely to die a couple of weeks after their cohort gets their first dose of the vaccine?

Norman Fenton and others at Queen Mary University of London, did these graphs, and have published a paper with many more. They think it’s very likely (what an understatement) that the mortality peaks are being misapplied to the unvaccinated and the single dose categories, when they are adverse effects from the vaccines, naturally skewing all the data on the cost-benefits and risk analysis.

It was the same in the 60 somethings:

And in the older age group too: Different weeks, but same distinctive pattern: 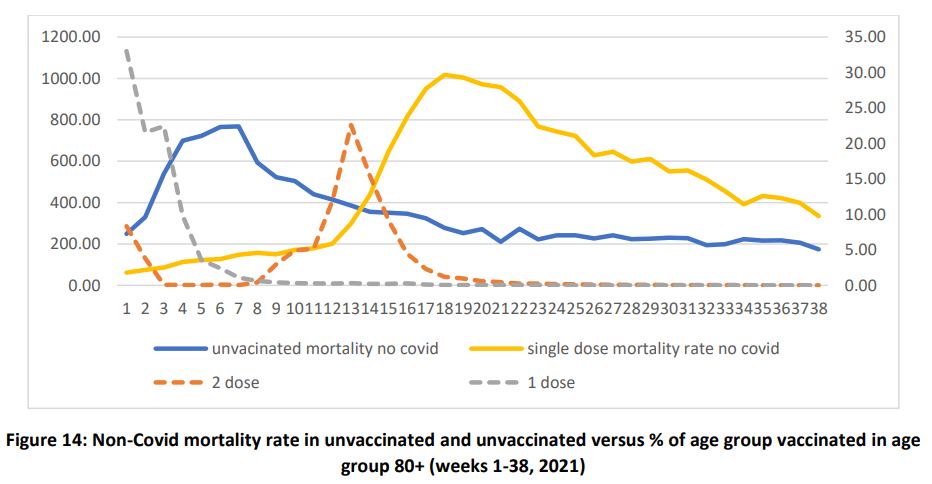 There are other mysterious anomalies. We’d expect the vaccinated to be more likely to be the higher risk, older and sicker people who are slightly more likely to die of all causes than the unvaccinated, yet the vaccinated don’t just die less often (according to the official stats) they die less often than their annuities tables suggest — less than people their age would normally die.

Consider what we are witnessing here. We have a vaccine whose recipients are suffering fewer deaths by causes other than covid and hence are benefitting from improved mortality. It appears very unlikely that this can be from the vaccine since the very best we can hope for is that the vaccine is causing no adverse reactions leading to additional non-Covid deaths. Instead, we have the unvaccinated who are suffering increased non-Covid mortality, especially in the near term close to the vaccine rollout for each age group. This is enigmatic. Does the vaccine have short-term benefits beyond reducing Covid deaths? Is undetected Covid increasing mortality in the unvaccinated in a way that presents itself as other causes of death? If so, why would it be staggered by vaccine rollout periods across age groups? None of these possible reasons make any sense so we need to look elsewhere for a more plausible explanation.

Normally, in any given year, the things that increase deaths in 70 year olds also increase deaths in all the older ages at the same time. Instead, in every older age cohort the deaths of the unvaccinated are associated with the vaccination roll outs.

Naturally, they wondered, like I did, whether these were deaths due to Covid but in untested people. We know Covid can cause heart attacks and strokes, and we know the UK missed a lot of cases. But most of those missed deaths would have been in the first weeks of the year, and not during summer.

It’s worth bearing in mind, despite these rather shocking graphs that there is no overall excess deaths from vaccines in the UK compared to other years. Excess deaths always has a wide margin of normal variation, so less deaths from influenza leaves room for more deaths in other areas, so to speak:

The scale of the mortality adjustment suggests that approximately 14% of all deaths are being miscategorised across all three age groups.

In line with the fact that the data does not reveal excess mortality compared to previous years, we see no direct evidence of overall excess mortality caused by vaccine side effects in the data. The spikes in mortality that appear to occur soon after vaccination may be caused by the infirm, moribund, and severely ill receiving vaccination in priority order and thus simply appearing to hasten deaths that might otherwise have occurred later in the year

What I like about this paper is that it’s so professionally written, and that, Fenton et al, work hard to find other reasons to explain these strange patterns. They consider all the ideas offered by the ONS (Office of National Statistics)  and others, and rule out that the unvaccinated were significantly more likely to be ethnic groups who have higher mortality, or terminally ill people who couldn’t be bothered getting vaccinated on deaths door, or that a more virulent strain appeared, or that the deaths in the “single dose” group were the people who were too sick for some other reason to get their second dose.

Why was this data not available before?

Incredibly, despite this being a national emergency, data was not split into separate age groups until recently “Week 44”, whereby these very odd patterns show up. Since age is the single most important variable in any Covid data, and the highest risk factor for death, this lack of data seems inexcusable. It’s baffling that those aged 10 – 59 are still bundled together, a worthless blurred conglomerate of people of both high and low risk.  Where are those separate age cohorts?  We need to see them…

Fenton et al suspect some of the adverse effects of the vaccine may be occurring in people who catch Covid either just before, or just after getting vaccinated. If that’s the case, we ought not have that in Australia, at least in some states where vaccination programs have gone out with no Covid present at all. Given the rush to push boosters now, surely understanding the risks would be priority number one, so we could reduce them?

But few in the Ministry of Health seem too concerned about our actual health.

Covid vaccines don’t seem to prevent deaths overall. That surely changes the risk-benefit equation. If there is an advantage in getting vaccinated against Covid, it is seemingly offset by the side effects of taking Covid vaccines.

One thought on “Blockbuster paper: Covid vaccines may not improve your chances of staying alive at all even in a pandemic”