Dystopia: underway in Germany is an aggressive government and media-led campaign that aims to hound and marginalize unvaccinated persons until they submit to vaccination against their will.

Dogs and unvaccinated stay outside

Though I had known unvaccinated people were being banned from entering “non-essential” shops in Germany, it was still quite a shock to me yesterday to pass by a Danish furniture shop and finding signs outside declaring “unvaccinated” people were not allowed to enter.

Just beyond the sliding glass doors was another sign, this one with an employee next to it checking for proof of vaccination. The shop was almost empty of customers. 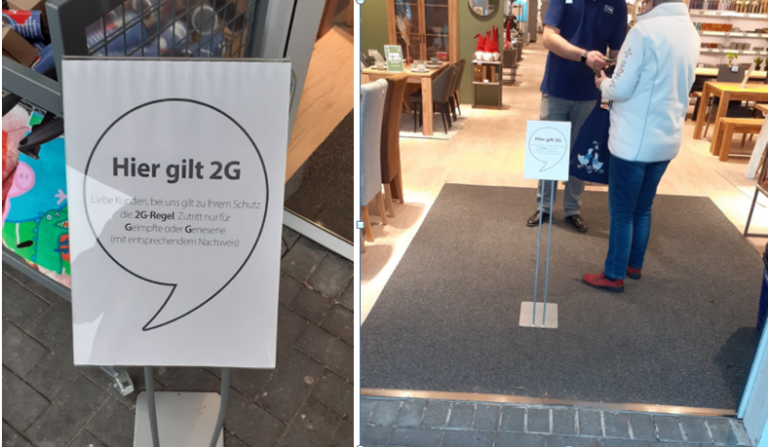 “2G (vaccinated or recovered) applies here. Dear customers, for your protection, entrance is authorized only for vaccinated and recovered persons (with proper proof).” Photos: P. Gosselin.

It was a kick in the gut. I suddenly realized this is what colored folks must have felt like decades ago in the Deep South, or Jews in Germany in the 1930s, or Mary and Joseph in Bethlehem 2000 years ago.

Department stores close off sections to the unvaccinated

Another example of the small-minded discrimination going on in Germany is published by Twitter user ‘Nini’ who in a video describes what she saw when she visited a department store in Bavaria, a German state with a totalitarian reputation lately:

“Oh my God, look at this,” says Nini in awe. “Such nonsense. I don’t know as well. This here means that because I’m unvaccinated, I’m not allowed to touch it. Otherwise I might infect someone.”

According to the Nini, the rules permit unvaccinated customers buy shoes, but not to cross the tape to buy regular clothes. I guess shoes are “essential” goods, but warm clothes in the wintertime are not.

No more than 2 visitors

Meanwhile up north, the state of Lower Saxony (where I live) issued yesterday new Grinch rules for the Christmas holiday season. 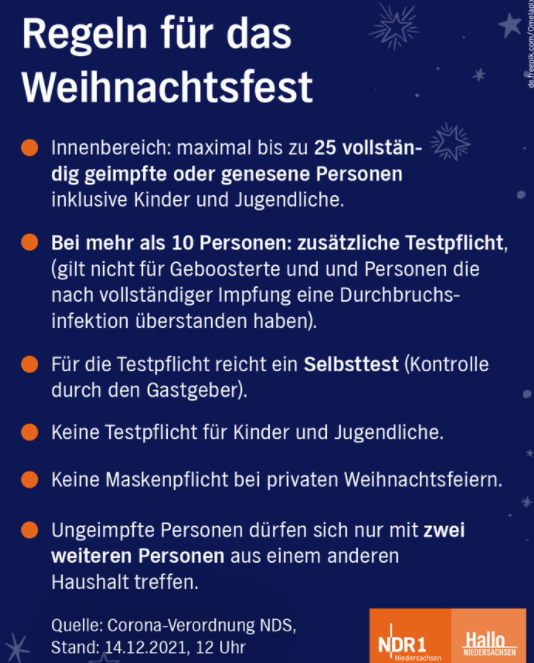 Among the rules for Christmas:

Unvaccinated persons may meet with only two other persons from another household.”

Like at shops, the unvaccinated are carriers of disease at home, too. Now this Christmas I’ll have to decide whether to disinvite my son or my daughter. This is just the beginning of the lunacy that it about to hit.

Germany: the worst in the world

According to “Our World in Data” site here, Germany now is among the most restricted countries on the planet in terms of COVID rules. 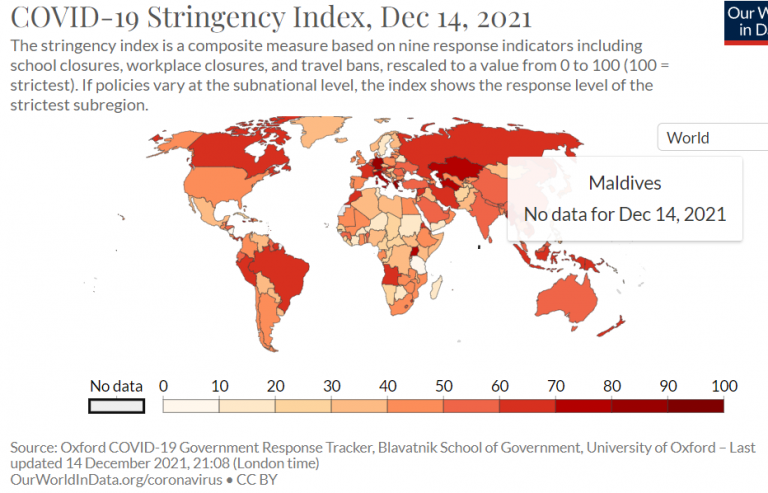 And things are set to get a lot worse here. Coming soon will be mandatory vaccinations, hefty fines if you refuse the vaccines, and jail time if you don’t cough up the fines. And this time no foreign world powers are going to storm the beaches of Normandy and march across the Rhine and free the oppressed.

But there is hope.

There are still millions of staunch unvaccinated persons who see what’s really going on, and also millions of others who were vaccinated against their free will due to bullying by their government, employer and media. There are also lots of parents who fear having to vaccinate their kids. Many other say there’s a limit to the number of shots they’ll accept – some have already reached it.

The rescue this time will come from within. You can feel it.