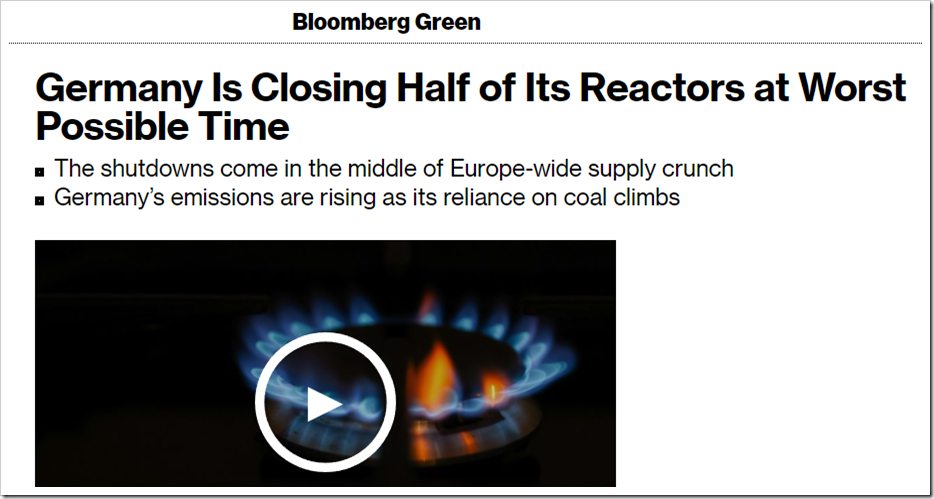 Germany is set to close almost half of its nuclear power capacity before the end of the year, putting further strain on European grids already coping with one of the worst energy crunches in the region’s history.

The shutdowns of Grohnde, Gundremmingen C and Brokdorf — part of the country’s nuclear phaseout — will leave just three atomic plants, which will be taken offline by the end of 2022. Beyond the squeeze on supply, the closures remove a key source of low-carbon power in a nation where emissions are on the rise…

The timing could hardly be worse. Power prices are near record levels across Europe, and Germany will need to rely on generation from costly gas and coal for another 20 years or so — before they too are phased out. Keeping the nuclear stations open any longer isn’t an option since that would require hundreds of millions of euros of investment, Koenig said.
Increased reliance on fossil fuels will boost emissions further, and Germany is not alone. A number of countries in Europe have ramped up coal-fired power production in recent months as gas supplies failed to meet rebounding demand and wind generation fell short.
Germany intends to take all coal-fired generation offline by 2038, with the lignite power-plant fleet reduced almost 16% by 2024. By that year, high carbon prices and an expansion of renewable power will have cut Germany’s coal production “strongly,” according to the International Energy Agency.

And that trend is set to be replicated, with much of Europe deciding to “get out of coal,” leading to a likely increase in renewable-power assets in the long term, said Sabrina Kernbichler, an analyst at S&P Global Platts.
Yet in the short term, coal is helping to bridge the supply gap. One German utility, Uniper SE, has postponed the planned decommissioning of its Scholven-B coal plant beyond the end of 2022 following delays in building a replacement gas unit at the site.

Germany currently gets a tenth of its electricity from nuclear. With the Greens now part of the new coalition government, there is little chance that any of the three remaining nuclear plants will be kept going beyond next year.