From the outside it looks like treason, to the insider it’s merely the extension of the most massive subsidy scam in history. For nearly 40 years, the wind and solar industries have been telling us that they’ll soon be standing on their own two feet. But their greatest fear is being given the chance to actually do so.

The renewable energy rent seekers traipsing the halls of power in Washington are desperate to ensure that the subsidies upon which the greatest economic and environmental fraud of all time critically depend are extended in perpetuity.

With the Squad firmly in charge, and Joe Biden wandering the Oval Office in a befuddled daze, crony capitalists have already given a list of demands to Democrats ready to deliver: decade-long extensions of the Federal tax credits that will allow wind and solar generators to continue to profit obscenely at taxpayers’ expense.

Alex Epstein describes how any further expansion of wind and solar, fuelled by federal subsidies, amounts to an economic suicide pact.

This is part 2 of my series “How passing the reconciliation bill will destroy American energy.” This horrific bill has at least 6 energy-destroying policies that alone should disqualify it from passage—including the extension and increase of solar and wind subsidies.

The reconciliation bill’s 10-year extension and increase of solar and wind subsidies will drive more and more reliable power plants off the grid, lead to skyrocketing prices and frequent blackouts. 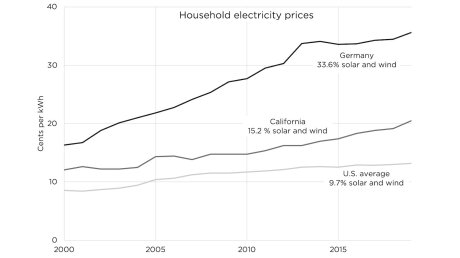 You get what you vote for…