Global leaders must be sweating

Data from Public Health Scotland (PHS)  is showing that not only are the “double jabbed” more likely to catch Omicron than the unvaxxinated — but they are more likely to be hospitalized as well. And that’s on a per capita basis and after controlling for age.  The triple jabbed are less likely to end up in hospital than both other groups, but for how long?

DOUBLE-JABBED Scots are now more likely to be admitted to hospital with Covid than the unvaccinated amid an increase in elderly people falling ill due to waning immunity.

It comes amid “weird” data showing that case rates have been lower in unvaccinated individuals than the single, double, or even triple-jabbed since Omicron became the dominant variant in Scotland.

Right now the double-jabbed are catching Covid twice as often as the unvaxxed in Scotland.  Even the triple jabbed are slightly more likely to catch Covid than the unvaccinated. 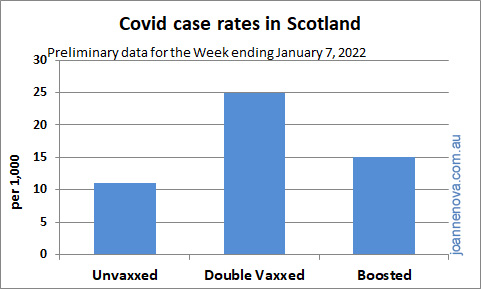 Preliminary data for last week – which is age-standardised to adjust for the fact that younger people are more likely than older adults to be unvaccinated – shows a Covid case rate of 11 per 1000 in the unvaccinated group compared to 15 per 1000 for those who had received a booster or third dose, and 25 per 1000 for the double-vaccinated cohort.

Well that breaks the narrative: Who exactly is putting who at risk?

The people spreading Covid at the moment are more likely to be vaccinated than unvaccinated. Yet they are not the ones being banned from cinemas, bars and clubs.

There goes the last main argument for mandatory vaccines. The hospital beds are not being filled by the selfish unvaccinated. 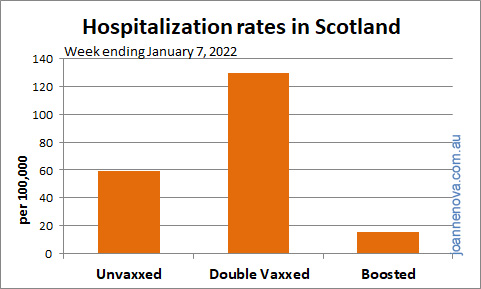 The triple vaxxed are for the moment, thankfully, less likely to die (of Covid anyway)

All the death rates for Omicron are in the order of 1 in 20,000 which is fantastic. But given that death can take 4 – 8 weeks, it’s perhaps a little too soon to fix these ratios in stone for the Omicron wave that is still steaming:

What about natural immunity?

Helen McArdle of the Herald Scotland (paywalled) tries to investigate why the data is so odd, but despite all the expert waffle, natural immunity is left til the end and only called “past infections”. If many people in the “unvaccinated” category are actually “immunised with the real deal” then the truly unvaccinated might not score so well if the people with natural immunity are taken out and put into their own grouping. I’m sure the experts know this, so it’s a little surprising they haven’t rushed out and done that? Why is natural immunity so hushed up?

The people getting in trouble now appear to be the ones who were due for a booster, but haven’t got it. So they were the first to be double jabbed and were higher income older high risk people. Their  double-vaccine is long past it’s best-by-date.  These are the people filling hospital beds, but no one is suggesting they should pay a health fee,  lose their jobs, or be banned from flying.

In other news,  even the boss of Pfizer says that two doses are not working against Omicron.

What this means according to Alex Berenson

Protection against “severe disease” is “reasonable right now” for people who have taken a “third dose” of Pfizer’s vaccine.

Put aside the fact that even those words are at best an optimistic interpretation of current data.

Put aside the fact that Pfizer has NEVER compared a three-dose vaccine regimen to a placebo in a clinical trial.

Put aside the fact that “reasonable right now” suggests that any effect of a third dose will not last.

What the chief executive of Pfizer is telling you is that if you received two doses of his company’s vaccine last year, your protection is gone. Even against “the hospitalizations and the severe disease.”

One thought on “Seismic shift: “Omicron breaks the rules”. The case rates are lowest in unvaxxed in Scotland. Double vaxxed most likely to go to hospital”