“It’s in the public interest” says the Immigration Minister

While some are cheering One Rule for All, ponder that we’re punishing someone because of what other people might do?

Djokovic is a political prisoner:

Immigration minister Alex Hawke didn’t dispute Djokovic’s claim of a medical exemption… [he] said allowing the player to stay could sway some Australians against getting vaccinated.

“His presence in Australia, given his well-known stance on vaccination, creates a risk of strengthening the antivaccination sentiment of a minority of the Australian community,” Hawke said in the cancellation notice.

If Australia can’t guarantee players in a Grand Slam will be free of political interference we don’t deserve to host one. Two other players with medical exemptions arrived in Australia and were moving around freely, but turned around and left.

Some say deporting Djokovic is a victory for “one rule for all”. But only the unvaxxed will be given a legal visa, allowed to fly in, detained, and post hoc have all their details scrutinized by teams of lawyers and be turned into a media circus and a “lesson” for the public.

How many vaccinated tennis players got things wrong on their forms? Who knows? Apparently no one verified the details of Novak’s forms before he was given a visa, so presumably no one checked any other ones either.  Will the Australian government go through all the vaccinated players applications now and arrest them on court if any got things wrong?

The unvaccinated are being punished and singled out.

Why did they issue him a visa in the first place? 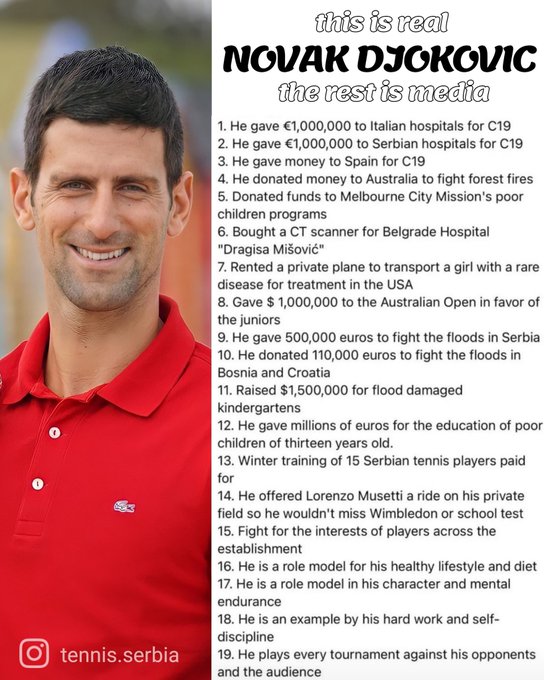 What sacrifice exactly are we protecting?

“Australians have made many sacrifices during this pandemic, and they rightly expect the result of those sacrifices to be protected,” he said Friday evening.

Perhaps Scott Morrison is afraid that people who had been forced into getting a vaccine they really didn’t want would realize they were bullied into it, and should have had a choice?

Because we are certainly not protecting the hard border any more. Australia has had 1.5 million cases of Omicron (that we know of) in the last four weeks. All of whom ultimately caught it in a chain from a double-vaccinated traveller.

As Alexandra Marshall @ellymelly says:
#Scomo said that #covid19 vaccination is NOT mandatory.

#Scomo had Alex Hawke throw #Novak out of the country for ‘inciting’ antivaxx sentiment.

How can you be deported for ‘inciting’ sentiment against a health order that ISN’T mandatory?

In the latest news a judge (or three) will decide Sunday if Djokovic can stay.

One thought on “A vaccine so good we have to punish The Worlds Best Tennis Player?”