Death by committee has a whole new meaning.

Australians believe that their doctors are independent, because we have public and private medical systems and lots of “competition” between medical groups that appear to be run like businesses. What they don’t realize is that the bureaucrats entirely own the profession and it’s a monopoly from end to end. There is the illusion of freedom, but AHPRA suspends anyone who “holds the wrong views”. Once suspended a doctor is not permitted to practice, to write scripts, sometimes they are not even allowed to contact their patients.

AHPRA is not sacking doctors for bad patient outcomes, patient complaints, fraud or high risk medicine. For all the world it appears that the worst thing a doctor can do is suggest cheap solutions that get in the way of Medical Profits.

The government forcibly takes the money to fund Medicare from Australians but doesn’t let them have any choice about using those funds to talk to the doctor they prefer — only approved clone doctors. It’s communist medicine.

If there was a free market, Australians could opt out of Medicare and fund their own doctors.

Who, or what, is AHPRA? Dr Jereth Kok was interviewed this week on the Caldron Pool show, and he explained that it is a “monstrous bureaucracy” in Canberra that rules over all Australian health professionals: doctors, dentists, nurses, physiotherapists, paramedics, osteopaths, pharmacists.

…AHPRA has become a Stasi-like enforcement arm of the Australian Government. It has devoted itself to purging every health practitioner in the country who dares to take a stance that is at odds with the decrees of the Covid bureaucracy.

Some examples are well known. Much adored Melbourne GP, Dr Mark Hobart, was purged by AHPRA in late 2021 for issuing exemptions to patients who were experiencing mental distress as a result of Victoria’s tyrannical mandatory vaccination regime. A few weeks later he was joined in forced exile by Dr Denes Borsos, who having lived through Eastern European Communism, has now been given a taste of Australian Communism.

The Covid Medical Network (CMN) are a group of senior doctors in Australia. They are having such an impact that even membership of the group is enough for immediate dismissal.

The most chilling part of the reasons given to Dr Brennan is this paragraph.

“It is not our role to evaluate the scientific validity of the letter. Our concern is that the letter strongly argued a highly polarised position, contrary to the public health order.”

Dr Paul Oosterhuis is one of the doctors suspended in Australia and he writes that the “bureaucrats are demanding” public renouncements of the forbidden groups “to the satisfaction” of the medical board — see the one below.  Doctors must not disagree with them in public. Read and weep. They have no freedom of association for doctors in Australia and no free speech. 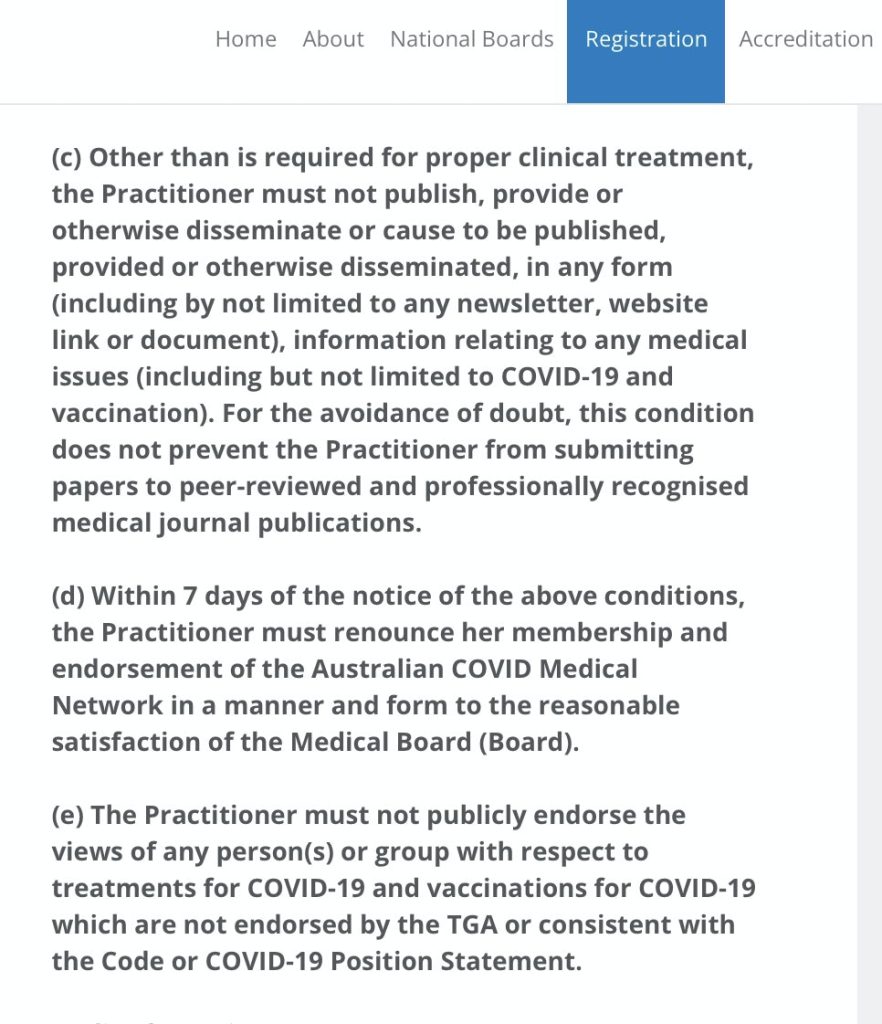 It is understood that the Western Australian doctor in question was threatened with suspension, and allowed to retain her licence subject to the conditions listed on the AHPRA website. Not only is she gagged from speaking publicly about any medical topic and forced to toe the “party line” on Covid; she is expected to demonstrate her loyalty to the regime by formally denouncing the heretical organisation CMN. With wording that is to the “satisfaction” of AHPRA.

Hands up who thinks your GP will tell you what they really think?