Fourth dose booster honeymoon all over in just 8 weeks

Photo by Hakan Nural on Unsplash

A new Israeli study sliced through the medical records of 1.2 million people. They compared people who had three doses with people who went on to have four. By three or four weeks after the 4th shot, people had half as many symptomatic infections. It’s “nice” but it’s only 50% efficacy, and that’s as good as it gets. So much for the glory days of “95% efficacy” — things are so unimpressive, no one talks in percentages anymore. By eight weeks after the fourth dose there was pretty much no extra protection against infection left.

On the plus side, the fourth dose did seem to prevent people getting a nasty disease, with 3.5 times as many 3-dose people getting a severe infection compared to the 4th-dosers. On the down side, those patients were only followed for six weeks. The honeymoon-from-hospitalization may fade quickly too. It lasts a few months with the 3rd dose.

So the fourth dose isn’t going to last through the winter — the meaningful honeymoon period is just a few weeks — from Week 2 to Week 6 to be precise, and that’s only 30-50% “protection”. If damage from Wuhan spikes is cumulative, the short honeymoon may be a bum deal, to say the least. 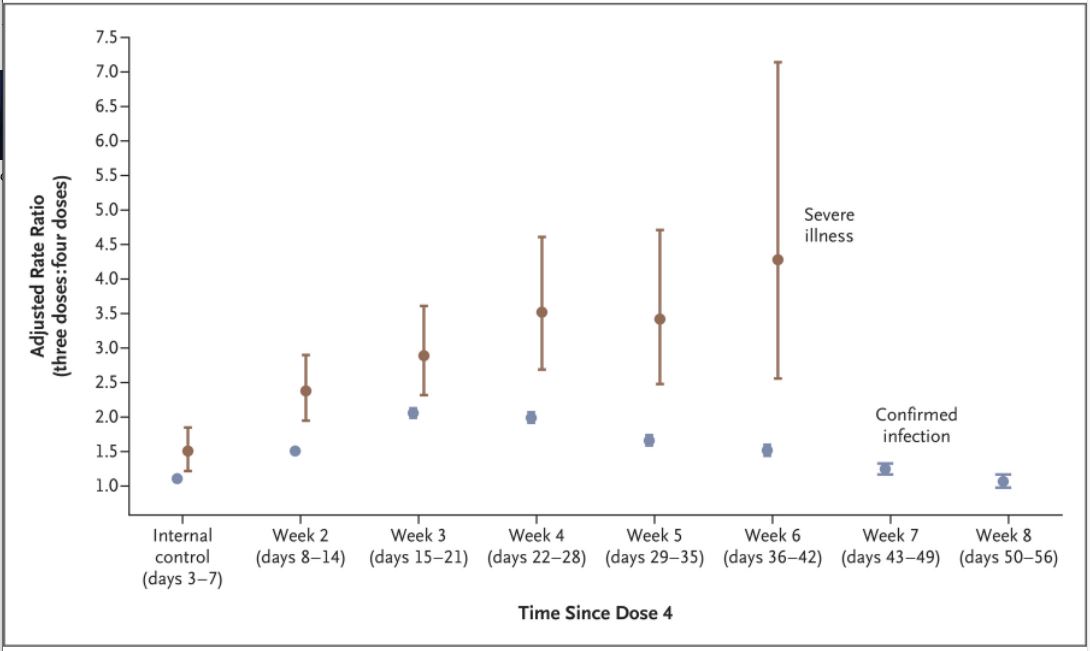 8 weeks after the fourth dose there was no difference between people who had three or four doses. They probably still have some protection against Severe infection, but for how long?

Dr Bean does a detailed video for those who are interested.