There’s an electromagnetic ball of fire that is 1.3 million times the size of Earth and just 8 minutes away by photon, and we really have no idea what’s going there.

Most experts thought this solar cycle would be as quiet as the last, but it’s ramping up fast. The sun is working itself up to a peak in a few years time. Experts thought there would be around 30 sunspots at the moment. Instead there are 60. The only thing we know for sure is that the Sun is a mystery and we are in the baby days of the science of Space Weather.

Climate models assume the solar wind and magnetic field has no effect on our climate.  But we find solar patterns everywhere from the prehistoric climate of Greenland, the North Atlantic jet stream, and even in human fertility and lifespan and jellyfish plagues.

Historians will mock us for trying to predict Earths climate without having the foggiest notion of what the sun will do next.

Solar Cycle 24 was fairly quiet as far as solar cycles go, with a peak of 114 sunspots; the average is 179. The Solar Cycle Prediction Panel predicted that the 25th cycle since record-keeping began would be similarly quiet, with a peak of 115 sunspots. By contrast, the number of sunspots for the last 18 months has been consistently higher than predictions. At time of writing, the Sun has 61 sunspots, and we’re still over three years from solar maximum.

It’s not the strength of the previous cycle that matters, but the length:

This, McIntosh and his colleagues predicted in 2020, meant that Solar Cycle 25 was likely to be stronger – perhaps among the strongest on record. And the climbing sunspot numbers would suggest they may have been onto something.

“Scientists have struggled to predict both the length and the strength of sunspot cycles because we lack a fundamental understanding of the mechanism that drives the cycle,” McIntosh said at the time. 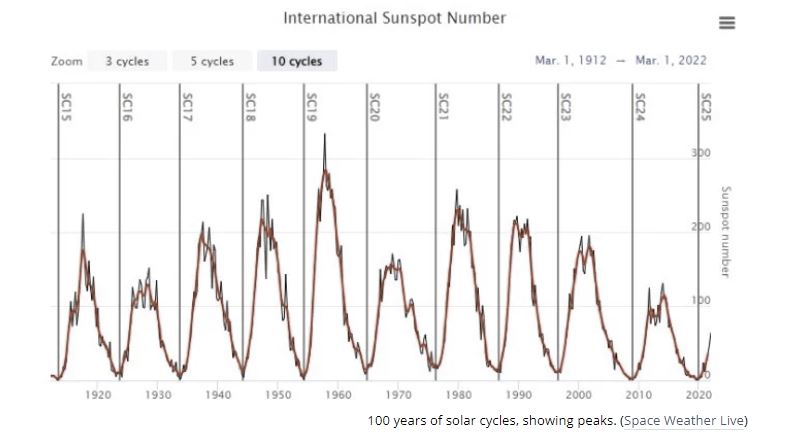 Climate modelers think the Sun is just a ball of light, and fill all the gaps in their understanding with “CO2”.

These solar cycles we don’t understand leave a mark on Earth’s atmospheric pressure, the  Central European floods,  wind and rain in Chile, Australia and Asia and even in the groundwater recharge rate in China. Maybe that matters?