Can’t get enough of the unthinking claims of our Minister of Energy. In my search for more information on the nuclear exit, I came across a webinar that she presented at the end of 2020 in which she explained her vision on this nuclear exit and the energy transition needed to accommodate this exit. She explained that a diverse set of solutions is needed, among which interconnectivity, gas-fired power plants and storage like batteries. She then continues (at 33:45 in the webinar, translated from Dutch, my emphasis):

And at the same time, we are also going to need baseload capacity, so energy sources that are running well and offshore wind really has a potential for that.

Those two statements took me by surprise. Green politicians generally don’t like the idea of baseload. The concept of baseload comes from conventional grids in which some power plants generate power at a fairly constant rate over an extended period of time, meeting minimum demand. With that definition, offshore wind obviously doesn’t have much potential for being baseload.

That she believes that “baseload is needed” is surprising at first, but notice that she redefines the term. According to her, baseload just means power sources that “run well” and then intermittent power sources can obviously also be considered baseload. They just have to “run well” (whatever that might mean).

Okay, just look at what this offshore wind “baseload” did the past two weeks (from when I started writing this post): 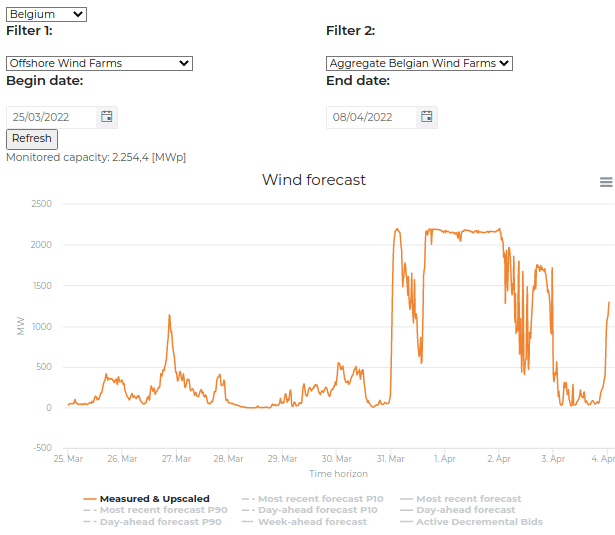 She continues with a question that she gets a lot (translated from Dutch, my emphasis):

When I sometimes open my Twitter, which is not always nice to read, there is often the objection “Yeah, but what happens when the wind doesn’t blow?“

That is an interesting question and she answers it by referring to a meeting she had with Mathias Verkest (CEO of Otary, cooperation between eight companies active in renewable energy) when she visited a wind farm (translated from Dutch, my emphasis):

But when we were on the boat to the wind farm, Mathias Verkest, CEO of Otary, was very indignant about this and said “Our windmills are turning 95% of the time. And they may not run at full power 95% of the time, but they do run 95% of the time“. And that is because the windmill … that technology improves continuously and they also produce electricity with little wind and with a lot of wind they produce more. But they are definitely a reliable form of energy supply.

The argument seems to be that offshore windmills evolved in such a way that they also run at low wind speeds and therefor run almost always, at least 95% of the time. This may be true, but it doesn’t tell us anything about how much is produced at a given time. In the graph at the beginning of this post, we see that electricity production by offshore wind fluctuated between (close to) zero and (close to) the maximum capacity. Even when windmills produce electricity 95% of the time, that graph doesn’t show a reliable form of energy.

This is also not an answer to the question that was asked. The question is “What happens when the wind doesn’t blow” and the non-answer is “Offshore windmills operate 95% of the time”. Sure, that guy’s windmills operate 95% of the time, but the actual question is what happens the remaining 5% of the time. This problem will become most acute in winter at peak demand during working days when solar production is insignificant and in cases where wind produces (close to) nothing. Then it will come to natural gas plants (with a limited capacity) and import that will have to save the day.

In the best case her answer is a non sequitur, it is not related to the question that she got asked a lot. It might be an answer to a different question, but not that specific question. In the worse case her answer is a straw man argument, changing the question into a different one that is easier to refute by pointing out that offshore wind operates 95% of the time. Whatever the case, she managed to successfully evade answering that question and avoid elaborating on the issue of intermittency.