Read on to see how reality appears to trump fantasy, according to the Energy Information Administration (EIA). The EIA is the part of the federal Department of Energy that provides data and statistics on U.S. energy production and consumption, both historical and projected. Once a year, generally in March, they issue what they call their Annual Energy Outlook, or AEO. AEO2022 just came out on March 3.

Francis Menton: The future of energy in the U.S.: Which projection do you believe?

What will the production and consumption of energy look like in the United States in 2050? There are two very different answers to that question.

On Side One are those who assert that we face a “climate crisis” that can only be addressed by the rapid forced suppression of the production and use of fossil fuels. Therefore, some combination of government coercion, investor pressure and voluntary institutional action will shortly drive coal, oil and natural gas from the energy marketplace, to be replaced by carbon-free “renewables.” And thus by 2050 we will have achieved the utopia of “net zero” carbon emissions.

Those on Side Two think that the Side One vision is completely unrealistic fantasy. Simple arithmetic shows that without massive energy storage no amount of building of wind and solar generators can make much difference in fossil fuel use for electricity production; and adequate energy storage devices to fill the gap do not even exist as a technical matter, let alone at remotely reasonable cost. Result: no matter what the grandees say, fossil fuel production and use in 2050 will be as high or higher than they are now.

Which Side do you think is right?

At the moment, all of the Great and the Good seem to have planted their flags on Side One. President Biden leaves no doubt as to where he stands. By Press Release of April 22, 2021, Biden committed the U.S. to a “net zero” economy by 2050:

"On Day One, President Biden fulfilled his promise to rejoin the Paris Agreement and set a course for the United States to tackle the climate crisis at home and abroad, reaching net zero emissions economy-wide by no later than 2050."

And by various Executive Orders, Biden has the whole federal bureaucracy committed to the fossil fuel suppression project, from stopping drilling to blocking pipelines to decommissioning power plants.

In the investment world, all of the biggest banks and money managers are on board. Here is a link to the “Road to Net Zero” web page of BlackRock, the nation’s largest mutual fund manager. Pithy quote:

"We believe that the transition to a net zero world is the shared responsibility of every citizen, corporation, and government. . . . In January 2021, we committed to supporting the goal of net zero greenhouse gas emissions by 2050 or sooner – and announced a number of steps to help our clients navigate the transition."

And it goes without saying that the world of academia has joined Side One with full unanimity. After all, these are the “smartest” people; and the “smartest” people all know that the “climate crisis” can only be solved by suppressing fossil fuels. Here is a representative statement from President Peter Salovey of Yale University, June 24, 2021:

"To avoid the most severe outcomes of climate change, experts recommend taking immediate action to reach world-wide carbon net neutrality in the next three decades. Yale will become a net zero carbon emissions campus in less than half of that time.  Along our path to zero actual emission by 2050, we expect to reduce our actual emissions by at least 50 percent below 2005 levels by 2035."

So surely then, with this kind of unanimous agreement from the top, backed by the full force of federal government coercion, fossil fuels will be completely gone by 2050.

The opening page of AEO2022 provides a wealth of links that can keep you busy for hours if you have the inclination.

The incredible thing about this AEO is it’s like nobody told them that the fossil fuels are about to be suppressed. Basically, they treat the whole “net zero by 2050” clamor as so much background noise. For example, what is the EIA’s view as to U.S. natural gas consumption from now through 2050? That’s in this chart: 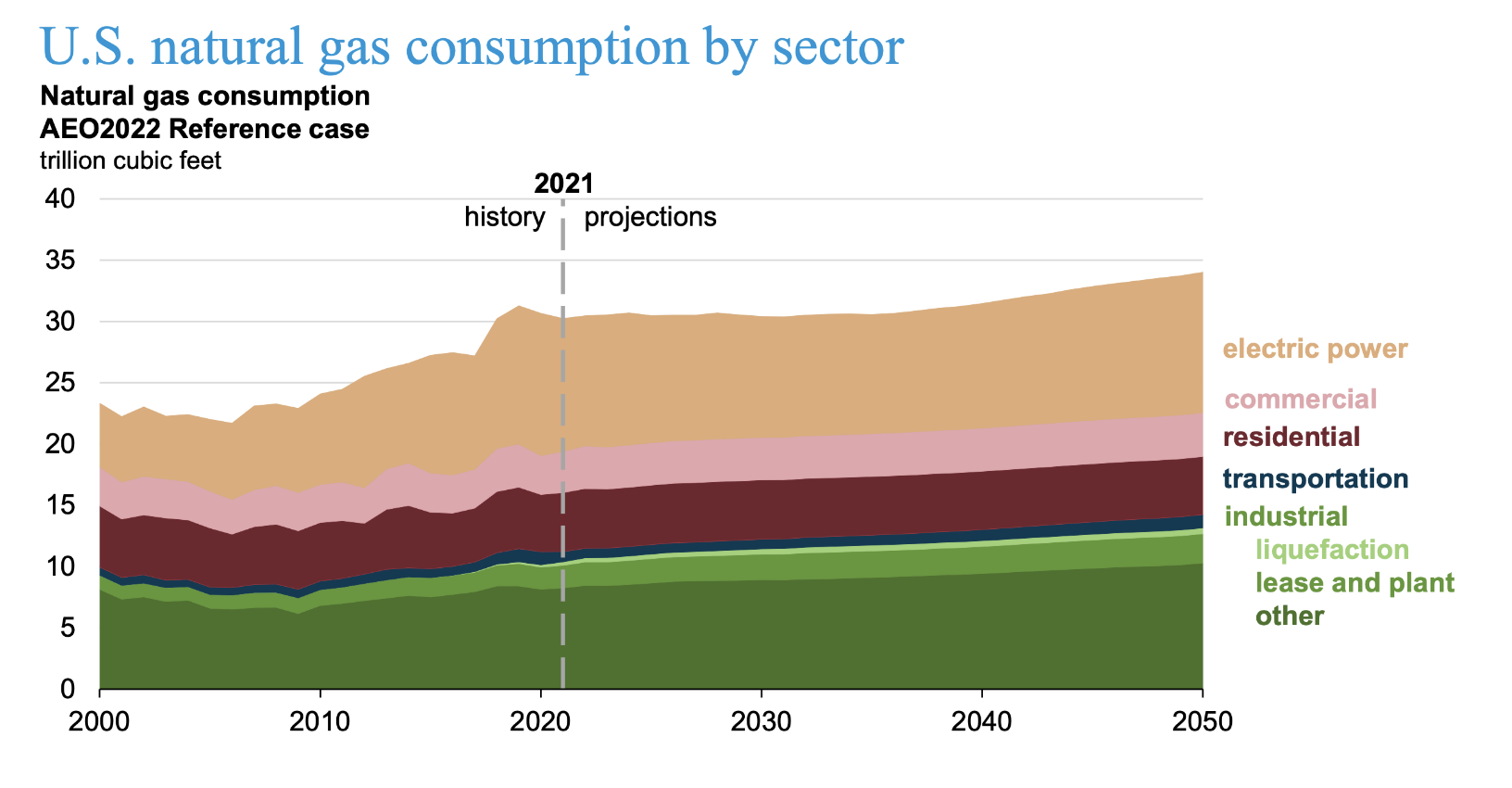 Net zero anyone? Instead, it looks like ongoing slow but steady growth throughout the entire projection period.
How about U.S. crude oil production? Surely that will plummet toward zero well before 2050. Not according to the EIA: 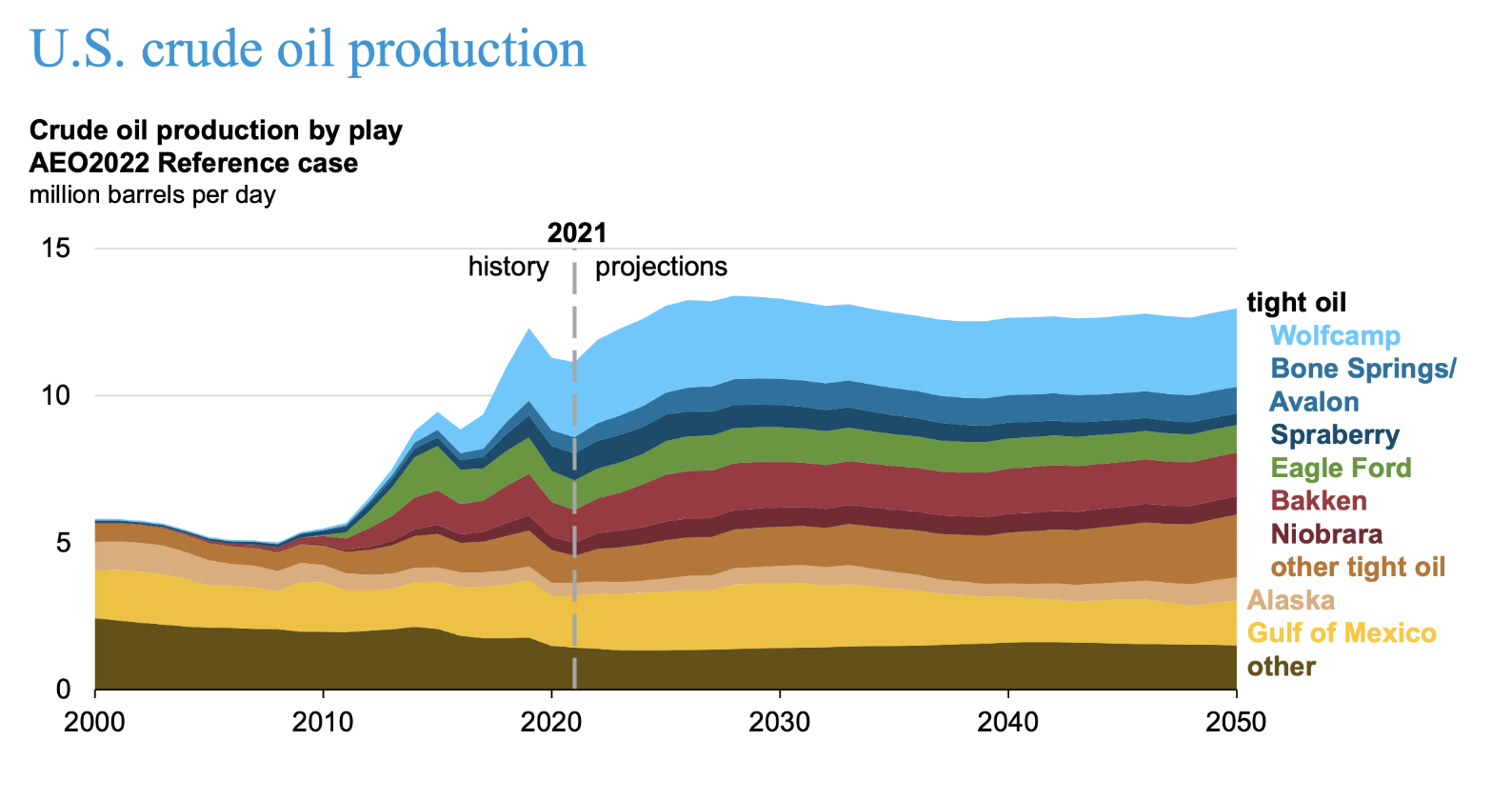 Basically, they predict that U.S. crude production will increase substantially over the next few years, and then level out and remain there through 2050.

To be fair, the two charts above represent what they call their “reference case.” They have other charts that show high production/consumption cases and also low production/consumption cases. However, the high cases are driven by high prices, and the low cases are driven by low prices. There is no effect discernible in the EIA projections resulting from regulatory suppression, let alone from woke investors or the pompous pronouncements of academia.

One of my favorite charts is this one covering projected “light duty vehicle” sales, aka cars. 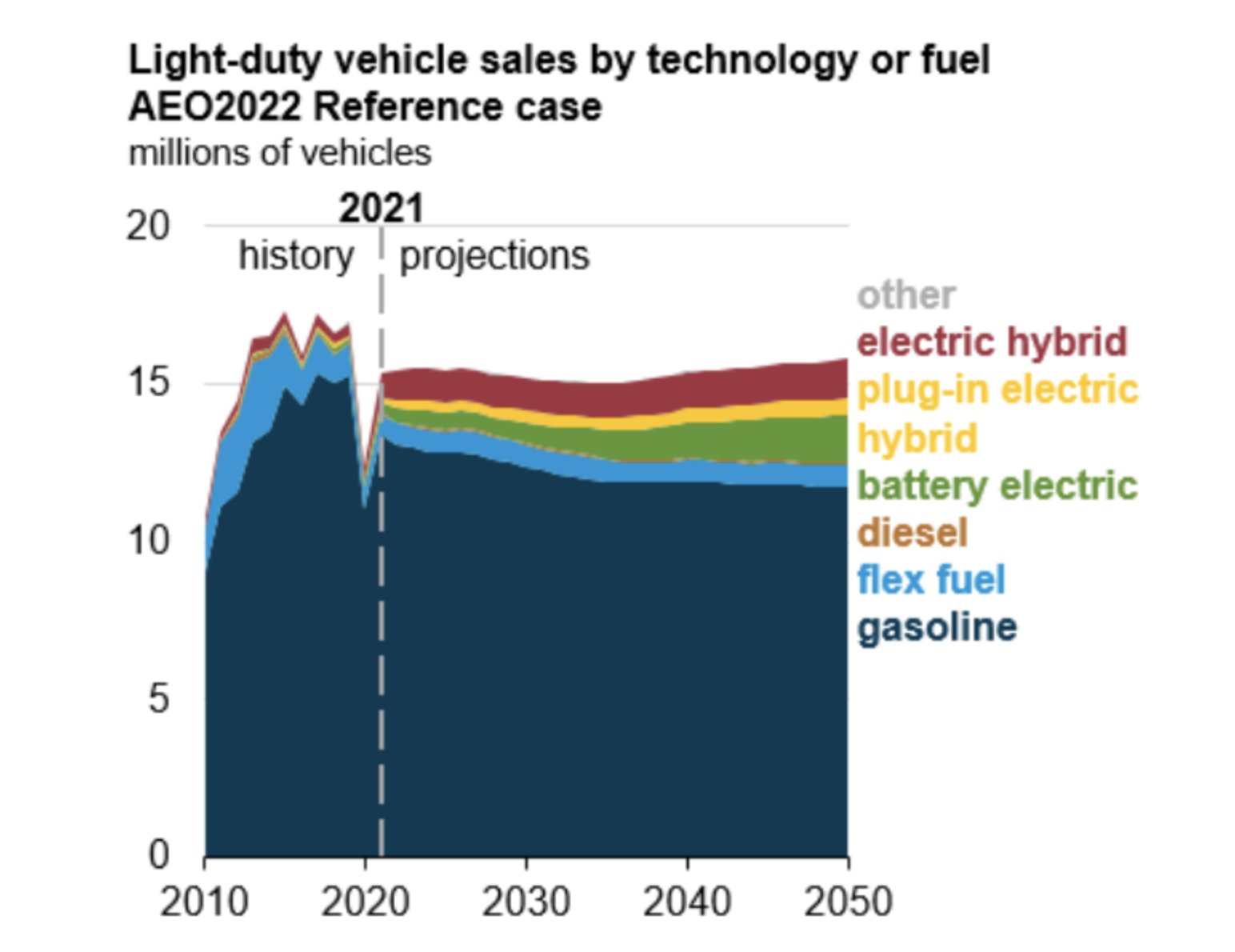 Numerous other links on the AEO2022 intro page provide for fascinating reading, essentially contradicting everything about our energy future that is coming out of the White House. For example, there is “EIA projects U.S. energy-related CO2 emissions fall in the near term, then rise.” In other words, the claims of “net zero” emissions by 2050 are so much hot air. Or there’s “Petroleum and natural gas are the most-used fuels in the United States through 2050.”

So place your bet as to which projections you believe. For myself, obviously I’m going with reality over fantasy.