There’s been mayhem quietly running on the Australian electricity market this month. Shh. April used to be a quiet month on electricity markets — it’s not summer and not winter, and nothing is stretched. At least not in theory. But this month prices have been running at $150 – $250 per megawatt hour. This is a big rise, even from last month when prices were often $70 – $120 in the big three states. To put that in perspective, six years ago in March, wholesale electricity prices were a tiny $30 – $60.

Last month a couple of units in a Victorian plant suffered a fire. Then on April 1, a single coal turbine at Liddell was retired, and then there was a wind drought, and now, lo, behold “we have lift-off”! Prices are now consistently running at $200-$300 per MWh, and often spend most of the day above $100.  Hey, but it’s only been a few weeks. 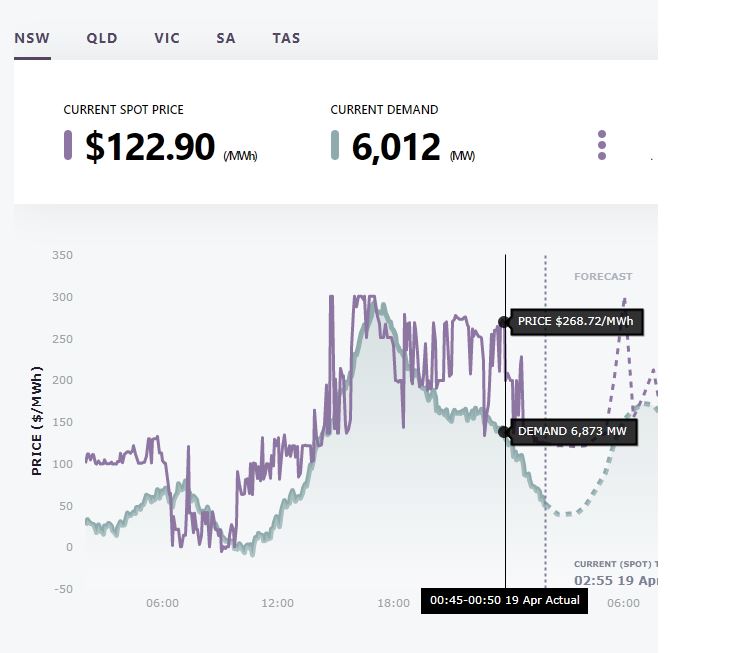 The headline makes it sound like coal outages are to blame, when really the only thing keeping electricity prices down in Australia are the coal plants:

…EnergyQuest chief executive Graeme Bethune said the sharp spike in domestic prices was not the result of additional exports of gas from the east coast.

“The spike in domestic gas prices does not appear to be due to any increase in LNG export volumes. In February Gladstone shipped an average of one LNG cargo per day but slightly less at 0.9 cargoes per day in March and in the first half of April,” Mr Bethune said.

“Nor do increases in electricity prices appear to be closely correlated to coal prices. Newcastle thermal coal prices reached a record $US430/tonne in March but were $US276/tonne by mid-April.”

Instead, outages at key coal-fired power plants in Victoria and NSW appear to have caused the spike in both power and domestic gas prices, along with a seasonal fall in solar generation as autumn rains set in across the NEM.

In late March a fire at a coal storage facility at EnergyAustralia’s Yallourn power plant in Victoria’s Latrobe Valley took two of its four generators out of service, stripping 700 to 750MW of power from the system. On April 1 AGL took the next step towards the eventual closure of its Liddell plant in the Hunter Valley, retiring a 500MW unit from the facility.

Mr Bethune told The Australian the winter outlook for east coast gas prices very much depended on the stability of the coal-fired fleet in the NEM.

Remember when Hazelwood closed? Australian energy prices have never been the same.

On a totally unrelated note: Why are there Australian gas suppliers saying they have more gas to sell?

“If Japan wishes to replace Russian cargoes and the US and Qatar focus on replacing Russian gas in Europe, there is certainly an opportunity for Australia to go a long way towards replacing Japan’s Russian LNG,” the report said.

Doesn’t most of the Northern Hemisphere want to “get off Russian gas”? If that’s the case, why aren’t our gas supplies being snapped up by the EU and Japan?