Cameron English explains in his ACSH article Earth Day 2022: Doomsday Isn’t Around The Corner.  Excerpts in italics with my bolds and added images.

As earth day approaches, activist groups have amplified their predictions of an impending environmental disaster. A brief survey of the evidence shows that the situation isn’t nearly as dire as they claim.

Earth Day is just around the corner. Activists outfits like Environmental Working Group (EWG) are using the run-up to this annual celebration to promote fear of pesticides and, for some reason, the musings of Michelle Pfeiffer. Let’s use the time a little more wisely and consider just two examples that illustrate how much progress we’ve made in promoting human flourishing and protecting the environment.

The point of this exercise, to plagiarize myself from this time last year, is to remind the world that doomsday isn’t inevitable. As we deploy more resources to solve the very real environmental problems we face, life on this planet gets better.

Let’s start with a well-established theory from economics known as the Environmental Kuznets Curve (EKC): economic growth is initially accompanied by increased pollution. Over time, however, we acquire enough resources to invest in technologies that promote sustainability. As the authors of a 2020 study noted:

The EKC literature suggests that economic growth may affect environmental welfare through three different channels: scale effects, composition effects and technique effects. The growth of the economic scale would result in a proportional growth in environmental pollution, and the changes in the industrial structure would lead to the reduction of pollution intensity.

Further economic growth causes technological progress through which dirty and obsolete technologies are replaced by upgraded and cleaner technologies that improve environmental quality.

That’s a foundational point worth remembering because EWG and its ideological allies would have you believe the opposite conclusion, that our “exploitation” of earth’s resources is inherently destructive.

Evidence from all over the world exposes the folly of such thinking.
Let’s consider some examples.

Cleaner air than ever before 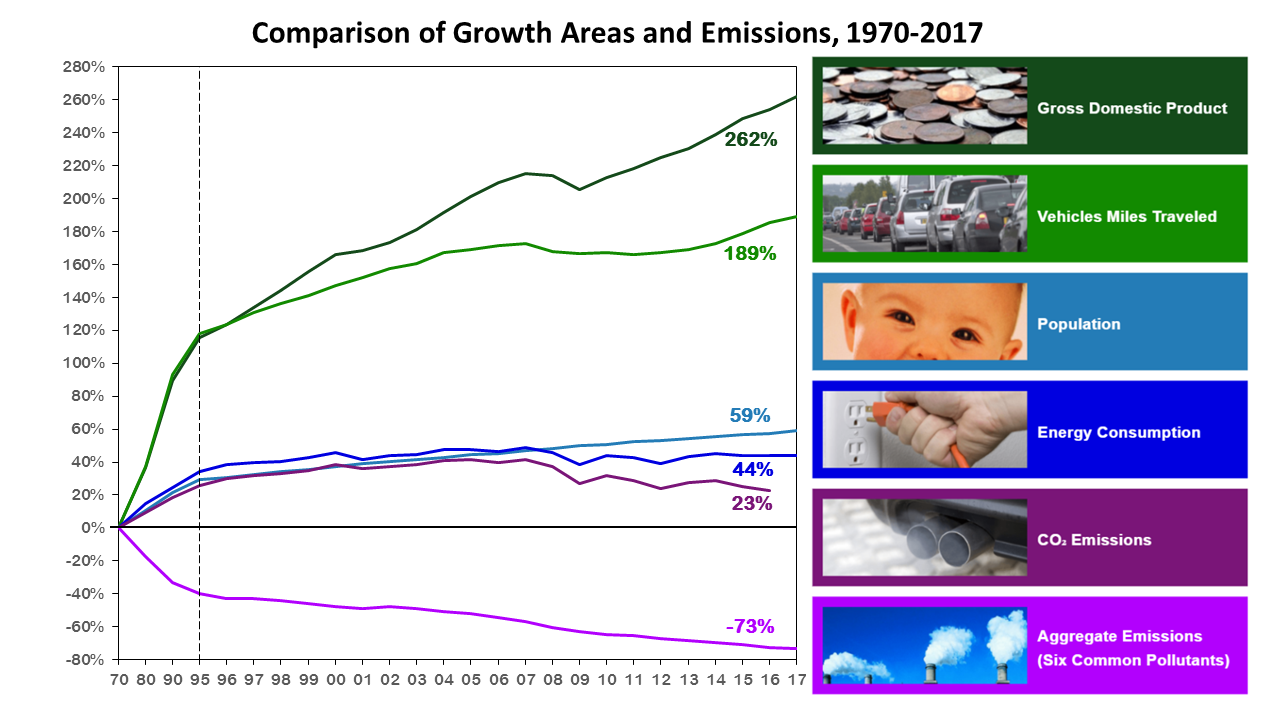 To enlarge, double-click image or open in new tab.

Since 1970, the EPA notes, the combined emissions of six common pollutants have plummeted by almost 80 percent, facilitating “dramatic improvements in the quality of the air that we breathe,” the agency added. To get more specific:

The EPA attempted to pat itself on the back by attributing these declines to its regulatory actions. But that analysis is incomplete. [Unmentioned was the fact consumption of clean-burning natural gas increased 23% during the same period these pollutants declined.] Meaningful environmental protection efforts don’t come cheap; wealthy countries are usually the only ones with the resources to reduce pollution. There’s a tight correlation between a nation’s GDP and the number of deaths attributed to outdoor pollution.

To enlarge, double-click image or open in new tab.

Our World in Data drew two very important observations out of these numbers; both point to the importance of economic growth as a weapon against pollution. Death rates tend to be lowest in the poorest and wealthiest countries. Nations with higher death rates, India, for instance, are often emerging economies that haven’t yet turned their attention to pollution reduction. There are some outliers to this trend, of course. Certain countries have high rates of pollution but low rates of respiratory mortality, Our World Data also explained:

Countries such as Qatar, Saudi Arabia, Oman, Kuwait, and the UAE have a comparably lower risk of premature death, despite high levels of pollution. They do, however, have a significantly higher GDP per capita than their neighbors … Overall health, wellbeing and healthcare/medical standards in these nations significantly reduce the risk of mortality from respiratory illness.

In response to critics of animal agriculture, I’ve recently noted that the environmental footprint of food production is significantly smaller in developed countries. The trend is similar whether we consider the amount of land dedicated to farming or the use of inputs like fertilizers and pesticides. Even looking at agricultural carbon emissions, the ultimate boogeyman these days, we can see that economic growth fuels important reductions. Our World in Data helpfully noted that.

We see a very strong rich-poor country divide. High-income countries tend to have energy-intensive industry or service-based economies. Food systems can contribute as little as 10% to total emissions.

Another way to verify this trend is to consider the environmental impacts of local vs. global food production. The latter invites the use of technological innovations and economies of scale that offset the emissions farmers inevitably generate. Policies that unnecessarily restrict access to tools like biotech crops depress crop yields and force more land into food production, further boosting carbon emissions.

There are more examples of economic growth driving increases in sustainability, but the point is clear: our planet gets “greener” as we get wealthier. The warnings that we’re running out of time “to restore nature and build a healthy planet” will grow more shrill as Earth Day approaches. Just remember to take the doomsday predictions with a grain of salt and reflect on the tremendous progress we’ve made in living sustainably.