I don’t know who is advising the PM on energy matters, but they should be sacked! 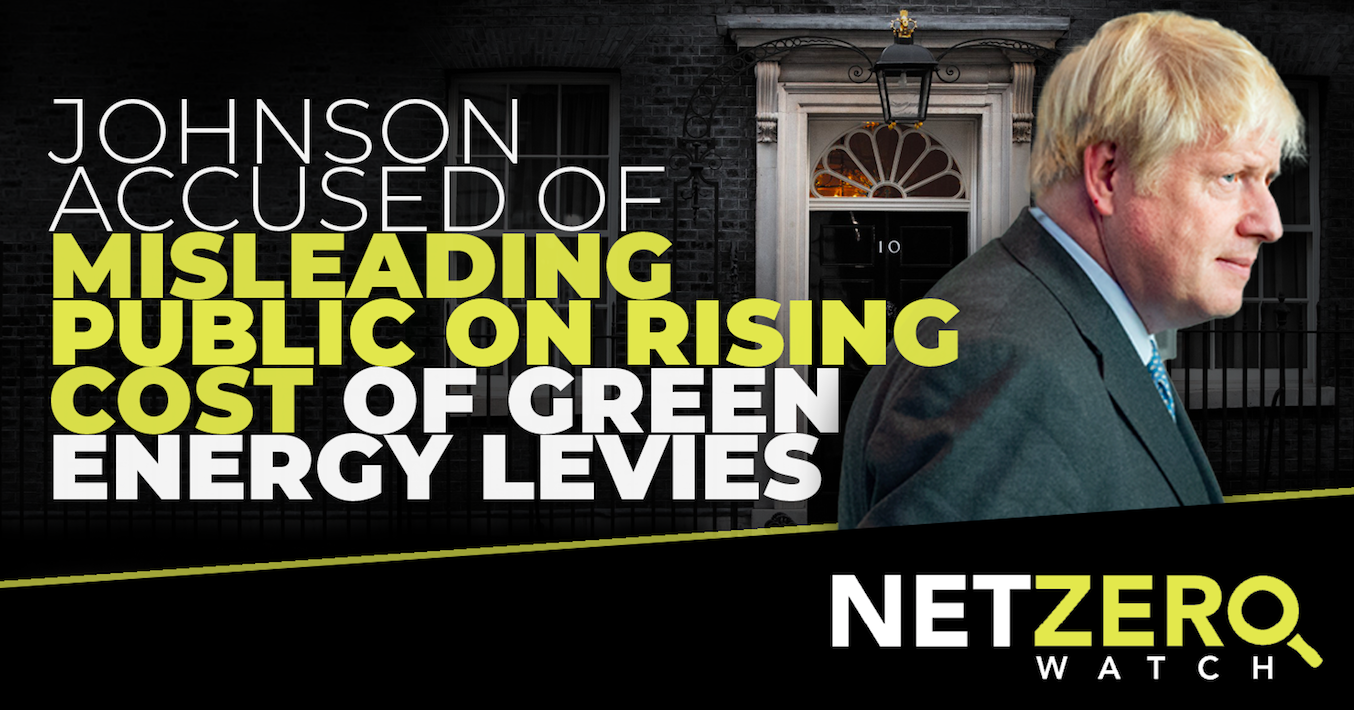 Net Zero Watch has accused the Prime Minister of being economical with the truth about the cost of renewable energy levies.
Speaking during his visit to India, Mr Johnson rejected growing calls for scrapping green levies on energy bills, claiming that renewable energy “has helped to reduce bills”.


Mr Johnson said:
"Overall, if you look at what we have done with renewables it has helped to reduce bills over the last few years and will continue to do so. That’s why one of the things I want to do is use this moment to really drive towards more offshore wind turbines."

Tab 2.7 of OBR spreadsheet ‘Supplementary fiscal tables: receipts and other‘, in the Economic and Fiscal Outlook – October 2021

Boris Johnson’s intervention comes just days after government officials briefed the media that ministers were “examining whether green levies – used to fund renewable energy subsidy schemes – could be phased out gradually or dropped altogether by the autumn when bills are expected to soar.”
Green levies currently cost the UK economy about £11 billion a year in total, putting £150 a year on the average household electricity bill, and a further £250 per household on the annual cost of living, a total of £400 per household per year. The levies also depress wages and rates of employment.
Net Zero Watch and a long list of MPs have repeatedly called on ministers to remove these subsidies from energy bills to help reduce the mounting cost of living crisis.
Pollsters have warned the Tories that the cost of living is becoming a defining issue for voters.


Craig Mackinlay MP, chair of the parliamentary Net Zero Scrutiny Group, said:
"If renewables were providing cheap energy they wouldn’t need a subsidy, surcharged on consumers’ bills. We hear too much of the low-cost argument about renewables which is simply untrue. The environmental levies are a lever the government could reach for as entirely under their control to provide immediate relief on domestic energy bills. It is becoming incomprehensible why they don’t use it."

Dr Benny Peiser, Net Zero Watch director said:
"Boris Johnson is prioritising the Net Zero agenda over all other economic and social issues. He even seems prepared to commit political suicide over the cost of Net Zero and cost of living crisis. His self-defeating dogmatism is politically unsustainable."

To clarify the latest situation, CfDs have refunded £138 million to consumers in the first three months of this year – ie a “minus subsidy”. This compares to the OBR’s forecast of a £2.2 billion subsidy for the whole of this financial year. This is because market prices are now higher than strike prices. The refund, however, does not mean that bills are falling – consumers still pay the same grossly over inflated price for renewables covered by CfD. Rather they won’t go up quite as much.

However, this £138 million rebate is chicken feed against the other subsidies – RO, CM and FITs – which are estimated to cost £6.6bn , £0.6bn and £1.6bn respectively this year. It needs to be emphasised that the cost of these three subsidy schemes are still being added in full to electricity bills, regardless of increased wholesale market prices due to global gas costs.

In other words, as I have repeatedly pointed out, renewable schemes covered by RO continue to receive the same subsidy as before, in addition to the rocketing market prices. Capacity Market payments, of course, are a direct cost imposed on customers, to pay for standby capacity needed to cover intermittent wind and solar power. As such the rising cost of gas-fired power has no relevance.

As NZW make clear, our electricity bills are much higher now than they would have been without renewable energy, and the extra cost we are paying has increased year-on- year during the last decade or more.