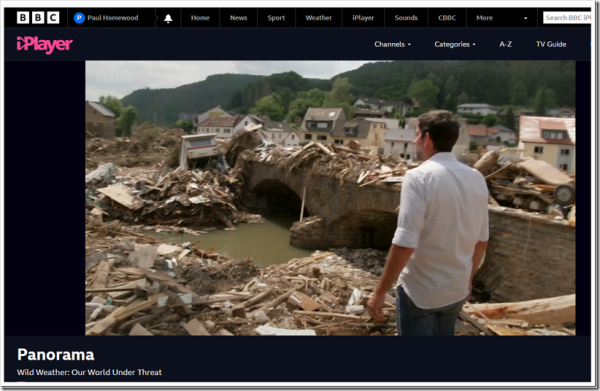 You will no doubt recall that Panorama edition from last November! Justin Rowlatt used the hour long programme to claim that climate change was making the world’s weather much worse. He made two specific claims that were blatant lies:

1) He opened the programme by stating:

“The world is getting warmer and our weather is getting ever more unpredictable and dangerous. The death toll is rising around the world”

2) There was also a large segment devoted to the recent drought in Madagascar, which Rowlatt described as “the world’s first climate change-induced famine.”

Neither claim was remotely true. Deaths from weather disasters have declined sharply in recent years, a fact that is easily established. Meanwhile a scientific study shortly after the edition established that droughts like last year are common events in Madagascar.

Below is the BBC reply:

The ECU considered two complaints about information contained in this programme. In the first, a viewer complained that in the introduction, the presenter incorrectly suggested the death toll from extreme weather-related events was rising and expected to rise further. The second complainant raised concerns that the programme inaccurately asserted that Madagascar was on the brink of the first famine caused by climate change. The ECU considered both complaints in the light of the BBC’s editorial standards relating to accuracy.

In the ECU’s view the wording of the introduction, which stated “the death toll is rising around the world and the forecast is that worse is to come”, risked giving the impression the rate of deaths from extreme weather-related events was increasing. In fact, as noted a recent report from the World Meteorological Organization, despite the number of weather-related disasters (such as floods, storms and drought) growing significantly in the past 50 years, the number of deaths caused by such disasters has fallen because of improved early warnings and disaster management.

BBC News accepted the wording in the programme was not as clear as it should have been and a public acknowledgement was put on the BBC’s Corrections and Clarifications website before the complaint reached the ECU. This was an appropriate means of response and ensured the potentially misleading impression was corrected as a matter of public record. However, an oversight meant the programme was still available on the BBC iPlayer without a link or reference to the published correction, and for that reason the complaint was upheld.

Separately the ECU considered the language used in the programme about the drought in Madagascar. It agreed the evidence showed southern Madagascar had suffered lower than average seasonal rainfall in recent years, and that climate change was one of the factors which had contributed to famine in the country. It also noted the reporter’s language mirrored that used by the UN’s World Food Programme. However the statement that Madagascar was on the brink of the world’s first climate-induced famine was presented without qualification, whereas other evidence available prior to broadcast suggested there were additional factors which made a significant contribution to the shortage of food. The complaint was therefore upheld.

The finding has been reported to the Board of BBC News and discussed with the programme-makers concerned. Appropriate clarifications will be added to the iPlayer version of the programme.

Both responses are a bit mealy mouthed, and the ECU still seems to be in denial that both claims were fundamentally untrue.

Nevertheless, Justin Rowlatt has now had three complaints against him upheld, all in the space of a few months (The first was when he ludicrously claimed that the offshore wind industry was now “virtually subsidy free” in the UK.)

It is difficult to see how he can maintain his position as Climate Editor, when his work is so untrustworthy.