The first claim by Sarah Keith-Lucas that Antarctica is warming at three times the global average is totally fallacious. As satellites show, temperatures there have barely changed at all in the last two decades, and are lower than they were in the 1980s: 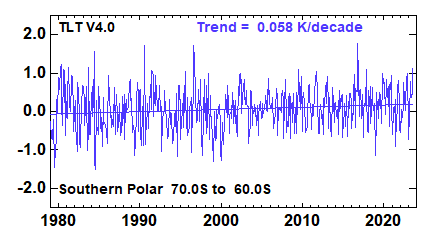 It is true that satellite coverage does not extend beyond 70S, but there are very few land stations further south either, so we simply don’t know what the average temperatures have been.

However a study last year, which was based on both station data and reanalysis, confirmed a cooling trend in Eastern and Western Antarctica. Even the warming trend  in the Peninsula had stopped in 1998:

This confirms what other studies have confirmed, for instance:

She then moves onto that “heatwave” which struck in March. She says that “scientists agree” that global warming is making Antarctic heatwaves more common and severe. However she then goes on to explain that this one was due to a weather event, an “atmospheric river”, which drew in warm, moisture laden air from Australia:

In other words, it had nothing to do with climate change at all.

As for these heatwaves getting worse, there is no evidence for that at all in the daily temperature data at the South Pole:

Despite that “heatwave”, temperatures for the whole of March at Amundsen-Scott were much lower than usual:

Neither is there any evidence of rising monthly temperatures or temperature anomalies there all year round:

All in all, the BBC’s attempt to claim that Antarctica is melting down, based on one day’s weather, is totally bogus.