The scale of the graph is so distorted that all the normal price gyrations fall to nothing, and there is only the spike — a full hour of $14,000 burning for every megawatt, and the state needing 7,000 megawatts. The demand level, or load is not unusual, but it’s about $100 million in electricity.

And this is the nice time of year for electricity managers, or it used to be. With weather that’s ideal for human habitation most air-conditioners and heaters are off. But the sun is setting earlier, and solar power is shrinking just as everyone gets home from work to turn on the oven.

Some may blame the “lack of coal power”, but notice what’s happening to wind and solar power at critical time from 5:20pm to about 6:30pm. 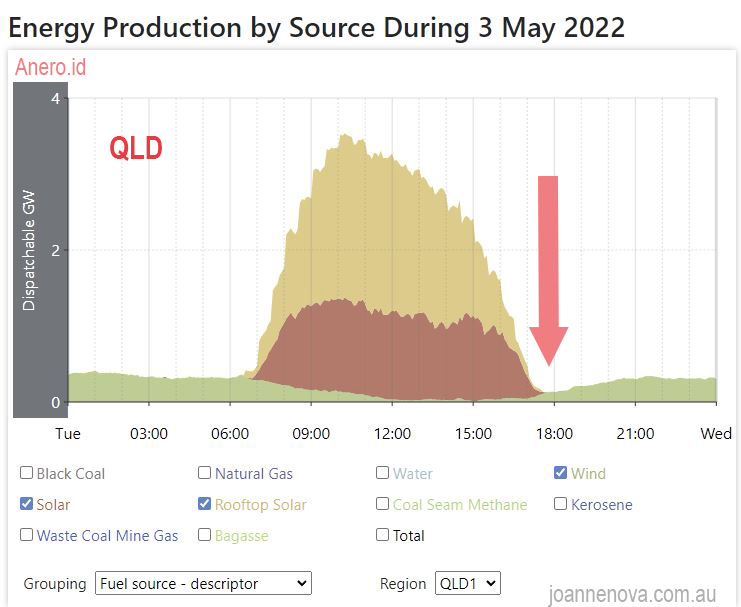 Though there are other factors at work too and some are a bit mysterious according to Paul McArdle. Queensland at one point had only a 7% instantaneous reserve plant margin, meaning there was almost no spare available generators.  The interconnectors between states are not sharing capacity. Something’s also gone wrong with a high voltage line: Ravine-Yass No. 2 330 kV Line has an unplanned outage. The AEMO issued a LOR1 – an actual Lack of Reserve notice.

In NSW it’s much the same thing

Something odd happens at 5:25pm and continues until 6:45pm. It’s another hundred million dollars worth of action.

What could it be? 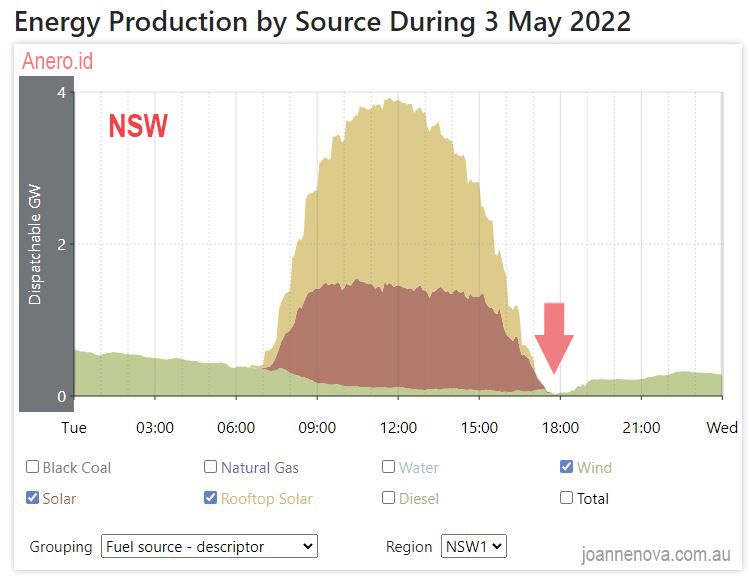 All the wind and solar available in NSW.       Anero.id

For May 3rd the average 24 hours prices were a wild $780 per megawatt in NSW and $760 in Queensland. Ghastly. The situation wasn’t so good the day before either. On May 2nd in both Queensland and NSW the average daily prices were around $220/MW each.

Some will argue that the interconnectors were not up to the task, because the flow is very constrained between Victoria and NSW. But when we had enough coal power in each state, we didn’t need big interconnectors. And once upon a time, before we had the national grid, the states were separate and self-sufficient.

Extra interconnectors and infrastructure  are another hidden cost of renewable energy. Extra burning price spikes are too.

And if terrorists are paying attention it might occur to them to take out a transmission tower or two. The more renewables we have, the more effective a few hostile players can be.

For those who want more detail, Paul McArdle is watching closely at WattClarity.  He comments here on the interconnector from Victoria to New South Wales, that the constraint equations are limiting flows north and south. Presumably there is not enough spare reserve power? Perhaps someone with more knowhow can explain. If Victoria still had Hazelwood coal plant running, possibly they might not be constrained?