What are they on? About twenty years of government funded propaganda and guilt.

Most Australian voters don’t have a clue — half of the nation thinks we make 10% of global emissions when the truth is more like 1%.

Climate change might be the greatest moral challenge of our lifetimes but most Australians are in the dark about what the real numbers are. They probably assumed that if we were only making one-tiny-percent, the government, the ABC, or even the education system might have told them. After all, we’re spending $13 billion dollars a year. What exactly are public universities for if not for letting Australians know this kind of data?

Where was the Government? The conservatives in charge keep throwing away their own best arguments.  Almost like they want to hang on to a few wealthy seats while they miss the chance to ignite middle Australia.

But the ignorance is no accident. All the players — the politicians, the academics, the ABC, ANU, CSIRO, Schools, Universities, et al and al sundry, all profit from Big Government. They serve the government first, and not the people, and that’s the problem.

This level of ignorance is reprehensible when you consider the media, political and educational fixation with climate change over the past two decades.

Yet few people call it out; the major parties, most of the media, and academe, all constrain the debate within absurd boundaries of make believe – they all pretend our climate policies matter.

Wait til Chris Kenny finds out that we make 1% of human emissions which are only 4% of total emissions, so that’s 0.04% or 4 parts in ten thousand of all the CO2 emissions on Earth. And that’s assuming CO2 emissions matter in the first place, which they probably don’t given how the effect of CO2 is dwarfed by the effect of water, and the tiny warming (such as it is) is beneficial in any case.

But he’s spot on with the money. The only electorates where climate change matters are the ones that can afford Gucci:

It is no accident that the most prominent voices in the climate change policy debate are millionaires and billionaires, nor is it surprising that they find the most receptive audiences for their prognostications in the wealthiest postcodes

Spender’s campaign posters promise a “better climate for Wentworth”. I guess this must be what you give the voters who have everything.

How many votes would Scott Morrison win if he pointed out it was a rich man’s fantasy to change the worlds weather?

When the rich campaign to tax flights and fuel they are just clearing off some riff raff from the roads and airports, and lining their own pockets with government funded gravy.

Australia circled in red. New Zealand too. Most graphs are done per capita, for obvious reasons, not per country. And of course the best graph doesn’t exist. I want the one that shows all these countries next to “plants”, “oceans”, “animals” and “microbes”. 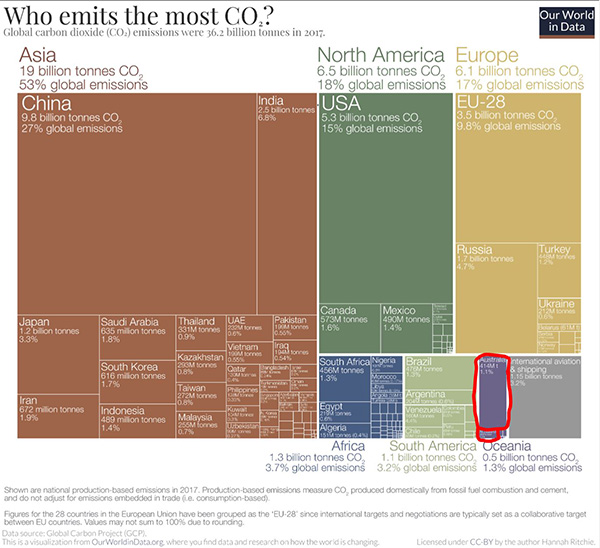 If CO2 mattered at all, there are only a few players that count.