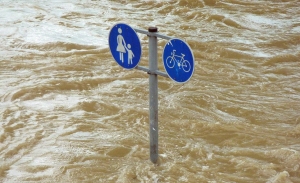 Too much instant attribution of single weather events to supposed human causes going on in today’s media, supported only (if at all) by rushed-out so-called analysis using climate models. Natural variation gets a low mark in this percentages blame game.
– – –
A Google news search for the term “climate change,” over the past few days turns up dozens of stories in corporate media outlets blaming climate change for recent deadly floods in South Africa, says H. Sterling Burnett @ Climate Change Dispatch.

Although many of the stories accurately captured the pathos of the human tragedy resulting from South Africa’s floods, they all mispresented the facts: human-caused climate change did not cause the recent floods. [bold, links added]

History shows that floods regularly occur in South Africa because of its topography and regional ocean circulation patterns.

No data supports the claim South Africa’s floods are increasing in number or intensity.

The death and damage caused by the April 2022 flooding are from rising populations in flood zones, poverty, and poor infrastructure.

The Associated Press (AP), CNN, the New York Times, and other mainstream media outlets have all jumped on the claims of a single study attributing the fatal flooding in South Africa’s Eastern Cape and Kwa-Zulu Natal, particularly in the fast-growing city of Durban, to human-caused climate change.

The widely carried AP story, “Climate change a major factor in fatal South Africa floods,” is typical of the media’s coverage of the flawed, unverified, research.

“The fatal floods that wreaked havoc in South Africa in mid-April this year have been attributed to human-caused climate change, a rapid analysis published Friday by … the World Weather Attribution [WWA] group,” writes the AP.

“‘Human-induced climate change contributed largely to this extreme weather event,’ Izidine Pinto, a climate analyst at the University of Cape Town and part of the group that conducted the analysis, said.”

Commenting on the study, the AP writes, “[t]he analysis used long-established and peer-reviewed climate models to account for various levels of sea surface temperatures and global wind circulation among other factors … [to produce a] rapid assessment analysis.”

It has long been recognized in the scientific community that the climate models relied upon by WWA to make its attributions and praised by the AP are seriously flawed. [See original article for cited links].
. . .
Among the greatest weaknesses acknowledged by the U.N. Intergovernmental Panel on Climate Change (IPCC) about climate models is that they only display a poor understanding of ocean circulation patterns and clouds, two factors fundamental to storm patterns.

Compounding error upon error, WWA then uses these flawed models in ways they were never intended to be used, to “attribute” odds that particular events or degrees of intensities of events, would not have occurred absent climate change.

Climate models were not designed to make such attribution claims.