It’s the day before the election and all through the house, electricity bills are doubling…

The price rises are so extraordinary one retailer is asking their customers to leave “in the next 24 hours”.

Across Australia small power suppliers are sending emails to customers right now warning them that their rates are going up next week by eye-watering amounts. Wholesale electricity prices were at a record high in April this year, and it hasn’t improved in May. Prices are hitting $200-$300 per megawatt hour, not as a peak, but as a 24 hour average. In South Australia two days ago, the average for the full day was $1,141. Futures contracts are rapidly taking off and these rises are starting to flow through to customers. Already, the small retailers are bleeding cash, just as they did in the UK, and if wholesale prices don’t come back to Earth soon, they will go out of business.

Reader Brett in South Australia shared an email from Discover Energy.  As of next week the standard peak rate will rise from 39 cent per kilowatt hour to 70 cents. Off peak rates rise from 27 to 46. He also adds, “My brother lives in NSW and today he received an email advising of an increase from 17 cents to 30 cents.”

Thousands of households have been slugged with a doubling of power prices after retailers passed on surging costs, sparking fears some operators may collapse under the weight of volatile market conditions.

Queensland’s LPE, with over 20,000 customers, said it was strongly encouraging customers to find alternative suppliers following its decision to increase charges by over 100 per cent on June 1.

“Within the next 24 hours, we strongly encourage you to seek an alternative supplier,” LPE chief executive Damien Glanville said in a letter to customers…

The huge price jumps among the second-tier retailers will stoke broader concerns that smaller Australian electricity operators could follow the fate of UK retailers where nearly 30 energy companies have collapsed after failing to hedge against rising wholesale costs.

Below are the new rates that Discover Energy sent to Brett. As business owners Discover Energy have been sweating bullets for two months now, hoping they didn’t have to do this. Things are so bad, they also encourage customers  to investigate available market offers by visiting www.energymadeeasy.com.au to find a better deal. Presumably they are losing money with every customer and every kilowatt. 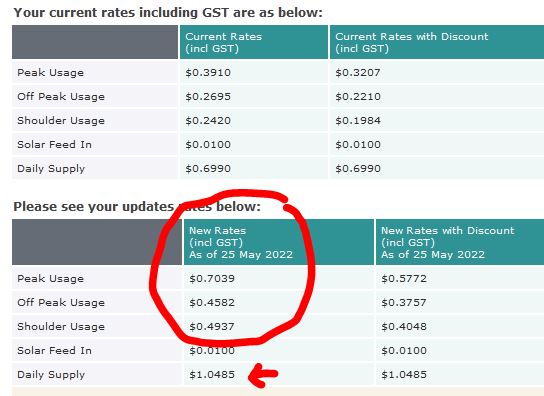 Ouch, look at those prices!

Discover Energy promise that when wholesale prices fall, they will pass the reductions on. It must be heartbreak-hill for them, and soon, if these rates continue, the pain will spread to all the small businesses that will face larger electricity bills. The price of coffee will rise, and so on, and people will spend less. Then staff will be laid off…

On their website Discover Energy blame “global disruptions” but curiously list the bid setting graph from the latest AEMO report. Their point was that all the price winning bids are now higher than they were the last quarter and two to three times higher than this time last year.  But the graph also shows that when brown coal wins the bidding stack, the prices are still only 2 cents per kilowatt hour.

So the hidden truth here is that if we had more brown coal plants the global disruption wouldn’t matter. We’ve left ourselves vulnerable by pushing it out of the grid.

As readers have explained, brown coal isn’t sold on the international market, because it can’t be transported safely, so there’s no bidding war for Australian brown coal from cold Europeans.

Apparently it can burst into flames, just like that, which is awkward for everyone. As Ian Waters says: ” it spontaneously combusts if you leave it in a hopper too long, put it in the hold of a ship. “

Given the enormous reserves in La Trobe Valley, Victoria could be a powerhouse of cheap energy and manufacturing, since the coal doesn’t have to be transported anywhere, but Dan Andrews decided to change the weather instead.

Thanks also to Sunshine Rainbows, RickWill, David Maddison and Gerard Basten for explaining more on Brown coal and electricity markets in comments here.

Probably too soon to change many votes

While this will be top of mind for people getting these astonishing letters, most Australians won’t realize what might be coming. This news hits so late and only affects small retail customers at the moment.  Larger retailers have longer hedging contracts and news media coverage has been small.

And since most conservatives have not pushed back against the myth of Cheap Renewables they probably wouldn’t benefit from these disconcerting rises in any case.  A Labor-Green-Teal alliance would make energy twice the price in half the time, but there are plenty of confused Australians who think that wind and solar power can change the weather and give them cheap power too.

h/t to Brett in South Australia. With commiserations…