Hopefully Elon Musk will give him a job.

Stuart Kirk, head of “responsible investing” for HSBC let rip at the doommongers of finance with a speech called “Why investors need not worry about climate risk”. He was speaking at A Moral Money Europe Summit, held by the Financial Times and is clearly fed up with listening to hyperbole and being told to analyze and worry about trivial long term future events. “Last night Target fell 25% — twentyfive!” … but I’m being told to worry about something coming 20 – 30 years down the track.”  Other speakers were unceremoniously dispatched. He complained climate risk has become so hyperbolic no one knows how to outdo it.  “Sharon [a speaker from Deloittes] said “we’re not going to survive!” But no one even looked up and ran from the room.”

Dangerously (for him) he also explained how the central banker models bury massive GDP and interest rate shocks in their economic forecasts of climate risk, otherwise they can’t generate bad news and headlines. Apparently, it’s all in the fine print that nobody mentions. They’re sounding more and more like climate models all the time.

That was last week. This week he’s been suspended.

Stuart Kirk, head of “responsible investing” for HSBC, gave a presentation at a Financial Times “Live Moral Money Summit Europe” a few days ago in which he shredded the climatista claim about financial climate risk.

Needless to say, you can’t say this! And so the predictable has happened:

HSBC has suspended a senior banker after he referred to climate crisis warnings as “unsubstantiated” and “shrill” during a conference speech that has since been denounced by the lender’s chief executive.

Kirk’s presentation controversially included slides that said “Unsubstantiated, shrill, partisan, self-serving, apocalyptic warnings are ALWAYS wrong”, while referring to comments made by officials at the UN and Bank of England, who have tried to raise the alarm over global heating.

Stuart Kirk, who has been HSBC’s head of responsible investing since last July, will remain suspended until the bank completes an internal investigation into the matter.

He will remain suspended until other economists get the message about what they are not allowed to say.

Well worth watching: This is a man who believes the science is right but nothing about the economics or market response makes sense. Luckily he doesn’t talk about science, just the things he knows.

The odd quandry — the markets are completely ignoring climate risk

Strange things happen: the more people say the world is going to end, the higher risk asset prices go. He found that the more the news media mentioned the “climate catastrophe” the higher the MSCI index rose. (The MSCI is the market cap weighted stock market index of 1,546 companies around the world.)

“The Sharons and Mark Carneys need to explain why the prices keep rising.” 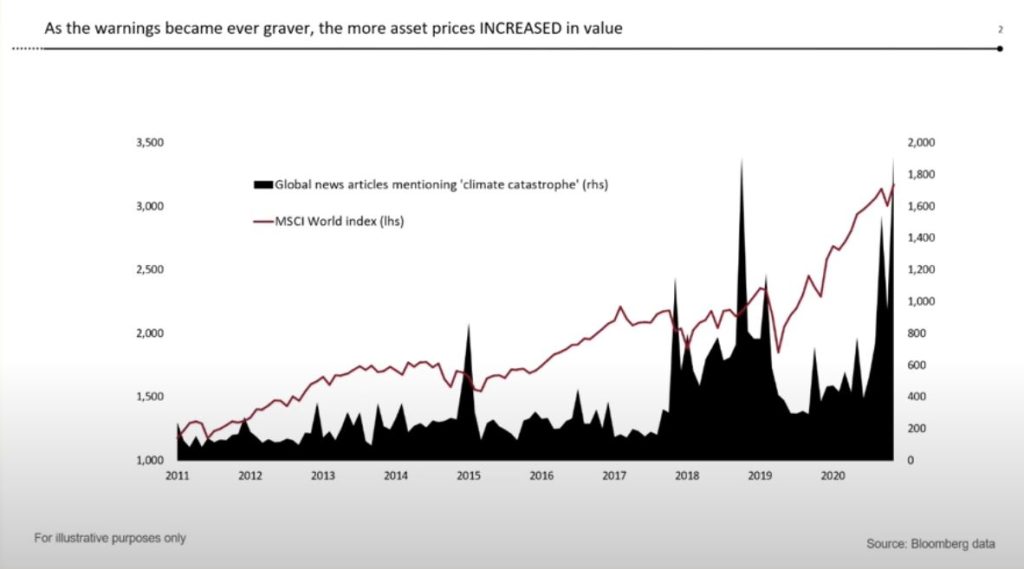 The more the news was “catastrophic” the more investors invested in the MSCI.

The fine print of the Central Banker Models of Doom

He also unpacked the central bankers climate risk stress test models and found surprises in the fine print. (He wishes they would pay more attention to inflation and growth instead.)  Climate change itself isn’t going to be a problem, he says, the only potential risk is from a major policy shock. So the models forecast a whopping change like a $200 carbon tax, out of the blue, …put that in the model, “Wham” — but even that wasn’t enough. …

He begs people to take the Bank of England and Dutch forecasts and “go right to the back and get into the fine print”. They will put in a whopping great policy shock in to their models, but then you look at the sensitivities of what they have done.  To make things look really bad the first thing they do, it seems, is trash GDP growth with huge unrealistic negatives ….minus one, minus three, minus two, changes so big they have never happened in our lifetimes… But that’s not the end of it. To make things look worse in these economic forecasts they have to put in a huge interest rate shock as well. And they never talk about it. It’s very easy to make a bank look sick, he says, if you destroy their fixed income base.

“Even with a carbon tax, even hitting growth, they couldn’t make climate risk move the needle so they had to get their clever little wonks in the back room, and put a gigantic interest rate shock through their models, in order to make headlines. That is not reported very much either. “

Despite this, humans, he says, are spectacularly good at managing change, which is true. That (below) is the long run change of the S&P 500. It’s the last hundred years of world wars, depressions, global financial crisis’, and pandemics — but nothing really changes the trends of the S&P 500 he argues, and climate change won’t either. 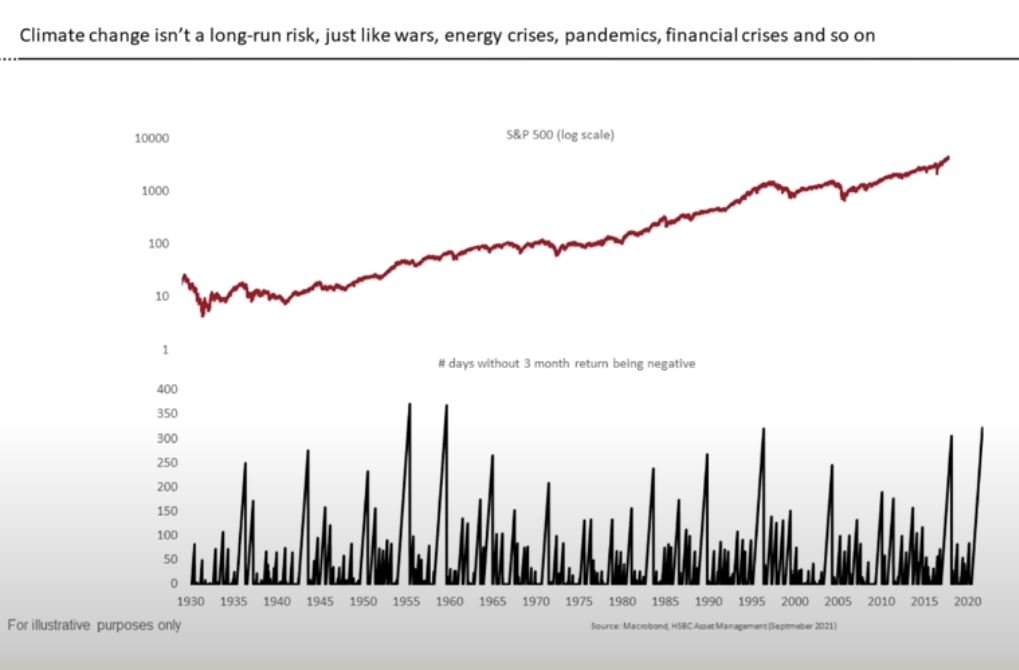 A century of S&P growth continues…

He seems quite optimistic about climate change, though after being suspended, he may not be so optimistic about our financial management, freedom of speech or that problems with central bankers will be fixed in our lifetimes.

We wish him the best of luck. Welcome to the dark side Stuart Kirk.