Baseload futures for electricity on the Australian market used to sell for $60 a megawatt hour last year. Now prices are rising by $30 in a single day.  Paul McArdle at WattClarity calls it “staggering”. Prices rose from $260/MWh at the end of Tuesday 24th May to $291.20/MWh at the end of Wednesday 25th May 2022. 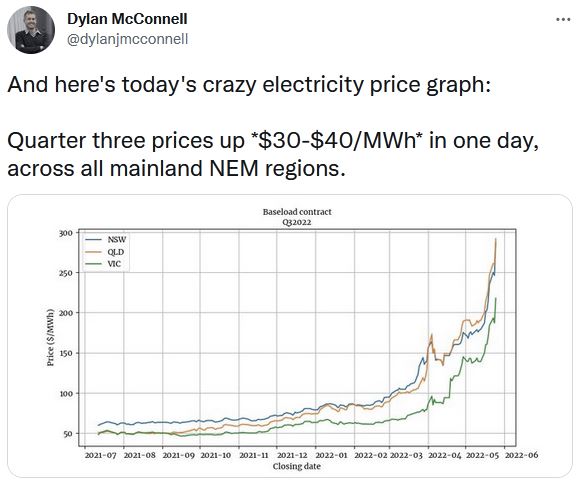 It’s a bloodbath.  It appears that no one wants to provide a guarantee they can sell electricity in Quarter 3 for much less than an astonishing, heartbreaking $290/MWh. Unless this situation resolves, the forward prices will soon flow through to the retail prices. At the moment, the number crunchers don’t seem to think it will be fixed soon.

So far, with several coal turbines out of action, and one turbine recently closing (Liddell) it appears to be a network on the brink, with no spare capacity anymore. The situation on the Australian grid isn’t improving. After record April prices, May will also bring in medals of the wrong kind. Current prices of wholesale electricity on the spot market are averaging a blistering $200 — $300  per megawatt every day for all the mainland states of Australia on the national grid.

This was determined — not by a free market — but by the AER (Australian Energy Regulator). Because we need a government agency to dictate that sort of thing. It’s not like we could let people pay a network fee and then choose to do deals with, say, the cheapest generator they can find.

Perry Williams at The Australian thinks a 10% rise is a shock, but if things don’t improve on the Australian Grid now that the Makeover Man is in charge it’s hard to see why retail prices won’t double, which is already happening to people on the smaller retail deals which didn’t have longer term hedging.

The default market offer will rise by 8.5 per cent to 18.3 per cent for NSW residential consumers. The figures take into account Australia’s official forecast inflation rate of 5.5 per cent for 2021-22.

Customers in southeast Queensland would see annual increases of 11.3 per cent to 12.6 per cent, while users in South Australia were in line for 7.2 per cent to 9.5 per cent hikes, the Australian Energy Regulator said.