The latest Klimaschau looks at the latest scientific findings on the Gulf Stream. An excellent review on the latest AMOC science. Here I present the results in English.

Climate panic-makers like the Potsdam Institute like to claim the Gulf Stream is showing ominous signs of slowing down and thus threatening to send Europe into a deep freeze. Their dodgy models have predicted a decline of its strength, due to anthropogenic climate warming.

The press release reports that Lars H. Smedsrud, professor at UiB and researcher at the Bjerknes Centre for Climate Research, have examined 100 years of research results to see how the ocean transport has evolved.

The researchers were surprised to find such consistent results showing a steady increase, which entails that the Gulf Stream’s extension into the Nordic Seas “has strengthened”. With the surprising volume increase, the total heat transport has increased with 30 percent.

Smedsrud and his team examined changes in relation to ice melting in the Arctic, glacier melting on Greenland and CO2 uptake from the atmosphere.

Another study: yet to find any slowdown

In another recent study by Canzos et al, 2022, titled: “Thirty Years of GOSHIP and WOCE Data: Atlantic Overturning of Mass, Heat, and Freshwater Transport“, the authors found that across-ocean systems monitoring the currents on the water column have yet to find any slowdown.

The authors analyzed hydrographic data collected for the last 30 years and built a model for each decade of the circulation of the Atlantic. Their results: They found “no changes in time in the Atlantic Ocean for each hydrographic section”.

This all contradicts claims by alarmist authors appearing in, for example, Nature which suggest the AMOC is weakening. The Rahmstorfian cherrypicked results were later challenged by Kilbourne et al, 2022.

Yet another recent paper by Neil Fraser and Stuart Cunningham titled: “120 Years of AMOC Variability Reconstructed From Observations Using the Bernoulli Inverse” found lots of variability in the AMOC volumetric flowrate since 1900: 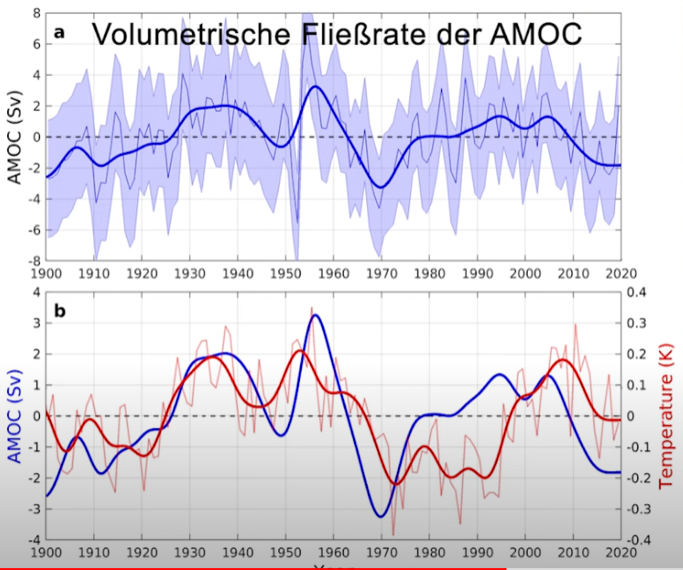 The authors say they were unable to find any significant AMOC weakening trend over the past 120 years, thus refuting the panic claims of Rahmstorf.

The missing AMOC weakening was also newly confirmed by a team of experts from Germany, Great Britain, France and the United States of America in an article in Nature Reviews Earth & Environment. According to the GEOMAR press release: “The analyses show that the AMOC has weakened and strengthened repeatedly over the past decades. This appears to be mainly part of a natural change that recurs at the rate of several decades.” The researchers add they have been “unable  to identify whether there is already an underlying longer-term weakening.”

More on this on Tuesday…stay tuned!