Wind and solar generators happily take credit when the sun’s up and the wind’s blowing, but dodge all criticism when blackouts follow sunset and/or calm weather. The standard trick is to point in every direction – except the obvious – when power rationing (euphemistically called “demand management”) or unplanned power rationing (aka widespread blackouts) follows routine and unpredictable collapses in wind and solar output.

All care and no responsibility, renewable energy rent seekers then point the finger at coal and gas generators – where a few of their units are often offline for routine maintenance, or, if they suffer a breakdown, are repaired and up and running in a jiffy – and assert that the chaos was all their fault.

The line goes that wholesale prices spiked and/or power supplies were cut because a coal-fired or gas-fired generator failed to deliver X hundred MWs of power, cleverly ignoring the fact that, at precisely the same time, wind power generators were delivering next nothing and solar generators were doing no better (sunset will do it, every time).

David Middleton explores the phenomenon below.

Oh, and as an aside, we love the line taken by The Hill’s Romany Webb, that “climate change is driving average temperatures up and leading to more frequent heatwaves”, which begs the question of what was the precise cause of the bitterly frigid conditions experienced across Texas and the midwest in February 2021? Apparently, glaring internal inconsistency is never an obstacle to strident assertion when it comes to the weather.

Blackouts… Because Climate Change! Blame Natural Gas!
Watts Up With That?
David Middleton
19 May 2022

Summer may still be a month away, but electric system operators are already feeling the heat.

With above-average temperatures forecast for much of the U.S. in coming months, system operators are facing the prospect of high electricity demand and reduced supply, which will make it difficult to keep the lights on. System operators should have expected this. After all, it is well known that climate change is driving average temperatures up and leading to more frequent heatwaves, which stress the electricity system. But many system operators still aren’t planning for this new normal. If they don’t start soon, the consequences could be devastating.

Electricity consumers in Texas saw a preview of what might be coming last week. On Friday, at the start of a multi-day heatwave, six of the state’s natural gas power plants unexpectedly went offline. As temperatures in some areas approached 100 degrees Fahrenheit, the Texas grid operator Electric Reliability Council of Texas (ERCOT) asked residents to limit their use of air conditioners and other large appliances. Most residents complied and widespread power outages were avoided. But one has to wonder – if this is happening in May, what will July and August look like?

Unless and until things change, and system operators begin planning for the impacts of climate change, we should all brace for more summer outages.

Romany Webb is an associate research scholar at Columbia Law School and senior fellow at the Sabin Center for Climate Change Law.
The Hill

Presumably, Ms. Webb is calling on system operators to increase generation capacity because of climate change? ERCOT appears to be doing just that…

Electric Reliability Council of Texas Inc., the Lone Star State’s primary wholesale grid operator, is expected to see another record-breaking year in 2022 with planned capacity additions of 27,242 MW and zero scheduled retirements, according to an analysis of S&P Global Market Intelligence data.

A year after the deadly February 2021 Arctic blast that paralyzed the state’s electric grid and triggered rolling blackouts, Texas has taken steps to improve grid reliability.

All but three of 324 power facilities fully passed ERCOT’s winter weatherization inspections in January, and the grid operator was able to withstand a cold front that moved into the state in February 2022. However, some industry experts question whether the system is ready to handle another storm as intense as in February 2021.
S&P Global Market Intelligence 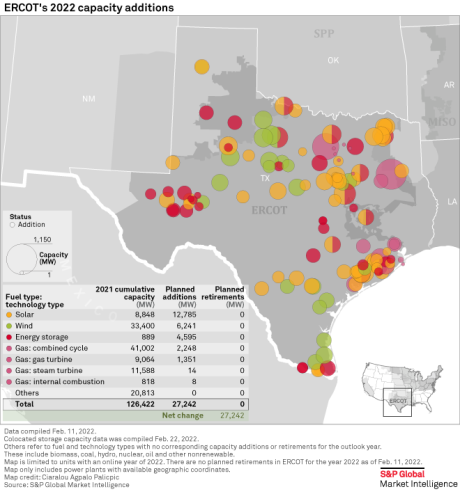 Fortunately, despite the addition of more unreliables to the ERCOT grid, natural gas will remain the dominant fuel… Which leads us to this:

Electricity consumers in Texas saw a preview of what might be coming last week. On Friday, at the start of a multi-day heatwave, six of the state’s natural gas power plants unexpectedly went offline. As temperatures in some areas approached 100 degrees Fahrenheit, the Texas grid operator Electric Reliability Council of Texas (ERCOT) asked residents to limit their use of air conditioners and other large appliances. Most residents complied and widespread power outages were avoided. But one has to wonder – if this is happening in May, what will July and August look like?

Demand for electricity typically spikes during the warm summer months, with the highest peaks occurring during summer heatwaves, when people rely heavily on their air conditioners to stay cool.

Just as people struggle with the heat, so to do many electricity generating facilities. Natural gas power plants, in particular, operate less efficiently and so produce less output when temperatures are high. Delivering electricity also becomes more difficult as higher temperatures can impair the operation of transmission infrastructure and result in more electricity being lost before it reaches consumers.
The Hill

July and August will be hot in Texas. If July and August weren’t hot in Texas, it would be anomalous. One of the reasons why the February 2021 blackout was so bad was the fact that most of the thermal power plants in Texas are designed to handle hot weather, not extreme cold weather.

This bit is particularly funny:

On Friday, at the start of a multi-day heatwave, six of the state’s natural gas power plants unexpectedly went offline. The Hill

The link is to a Bloomberg article, of course…

FailGas-fired plants make up all generation that failed: Ercot
West Texas to see extreme heat in some spots next week

The power-plant failures resulted in a loss of about 2,900 megawatts of electricity, the Electric Reliability Council of Texas said in an email statement Friday. That’s enough power for about 580,000 homes and businesses. Natural-gas fired plants make up all of the generation that failed, an Ercot spokesman said.
Bloomberg

ERCOT did put out a conservation request. However, at no point did the actual grid conditions even approach “Yellow”…

Green = The grid is operating under normal conditions.

Orange (Energy Emergency Level 1) = Emergency operations have begun due to low power reserves, but there are no controlled outages at this time. Energy conservation is requested.

Red (Energy Emergency Level 2) = The emergency level has been raised due to continued low power reserves. Energy conservation is requested. It is advised to create a plan in case controlled outages are needed later. Those with critical medical needs should register with their local utility and have a backup plan.

Black (Energy Emergency Level 3) = The highest level of emergency operations. Local electric utilities have been instructed to begin controlled outages. Health and safety should be made a priority by using city or county instructions and resources. Energy conservation is critical.
ERCOT

The ERCOT dashboard didn’t look a whole lot different than this over that climate change induced blackout weekend:

From May 12 to 15, peak power demand was less than ERCOT’s peak demand forecast.

And there was no drop in natural gas generation over that period either. 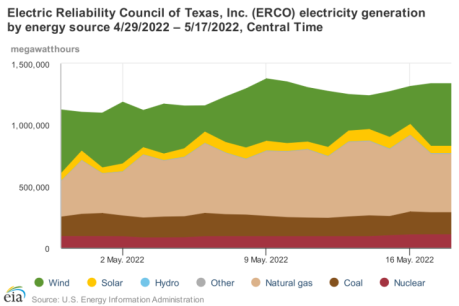 Wind power actually did experience a sharp drop off over the climate change induced blackout weekend (May 13-15), while natural gas continued to ramp up and down in response to wind’s downs and ups: 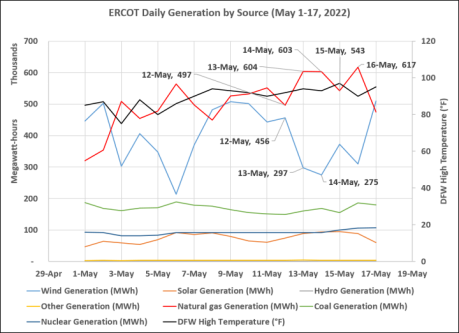 Why is it that nearly every article about natural gas failing winds up revealing a wind failure?
Watts Up With That?

So, it was all about the unreliables, and never about gas.