Year after year they told us it would get warmer, ski seasons would get shorter and children won’t know what snow is. Instead Thredbo in the Australian Alps has just had 125cm of snow, a full 4 feet, which some are calling a 54 year record.  Skiiers in Australia are thrilled. 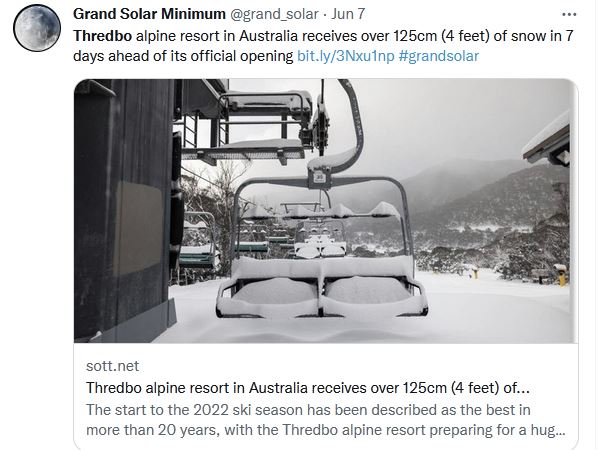 Thredbo alpine resort in Australia receives over 125cm (4 feet) of snow in 7 days ahead of its official opening https://t.co/p3JdsQg3Nc #grandsolar

In my many years living and working in Thredbo, I have never seen the Village so covered in snow ahead of the June long weekend,” Thredbo Resort general manager Stuart Diver said.

In the year 2000 the world’s top global warming experts at East Anglia University claimed “children just aren’t going to know what snow is” within a few years.

In 2003, a CSIRO report found that the total area covered by snow in Australian mountains could fall by up to 40 per cent.

“By 2020, the average annual duration of snow-cover decreases by between five and 48 days; maximum snow depths are reduced and tend to occur earlier in the year; and the total area covered in snow shrinks by 10-40 per cent,” it stated.

Think tank IPA’s senior fellow Dr Jennifer Marohasy said it had been a cold start to winter but because the Bureau of Meteorology had closed down weather stations and set limits on stations recording cold temperatures, it made comparisons difficult.

As Jennifer Marohasy says, they’ve closed long standing stations, and set limits of minus 10.4 C so if Australia were to break our long time cold records we’ll never even know it. Charlottes Pass in Australia reached minus 23 in 1994. How can we even measure that with thermometers that “stop” at minus ten?