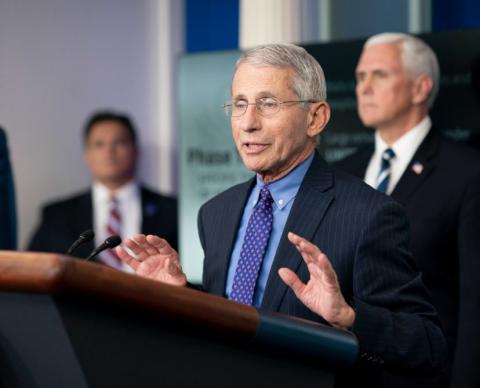 In twenty-first-century America, ordinary people are at the mercy of well-paid, unelected government experts who wield vast power.

That is, we live in the age of the technocrats: people who claim to have special wisdom that entitles them to control, manipulate, and manage society’s institutions using the coercive power of the state.

We’re told these people are “nonpolitical” and will use their impressive scientific knowledge to plan the economy, public health, public safety, or whatever goal the regime has decided the technocrats will be tasked with bringing about.

The narrative is that these people are not there to represent the public or bow to political pressure. They’re just there to do “the right thing” as dictated by economic theory, biological sciences, legal theory, or the study of military tactics.  We’re also told that in order to allow these people to act as the purely well-meaning apolitical geniuses they are, we must give them their independence and not question their methods or conclusions.

We were exposed to this routine yet again last week as President Joe Biden announced he will “respect the Fed’s independence” and allow the central bankers to set monetary policy without any bothersome interference from the representatives of the taxpayers who pay all the bills and who primarily pay the price when central bankers make things worse. (Biden, of course, didn’t mention that central bankers have been spectacularly wrong about the inflation threat in recent years, with inflation rates hitting forty-year highs, economic growth going negative, and consumer credit piling up as families struggle to cope with the cost of living.)

Conveniently, Biden’s deferral to the Fed allows him to blame it later when economic conditions get even worse. Nonetheless, his placing the economy in the hands of alleged experts will no doubt appear laudable to many. This is because the public has long been taught by public schools and media outlets that government experts should have the leeway to exercise vast power in the name of “fixing” whatever problems society faces.

The Expert Class as a Tool for State Building

The success of this idea represents a great victory for progressive ideology. Progressives have long been committed to creating a special expert class as a means of building state power. In the United States, for example, the cult of expertise really began to take hold in the late nineteenth and early twentieth centuries, and it led directly to support for more government intervention in the private sector. As Maureen Flanagan notes in “Progressives and Progressivism in an Era of Reform,”

Social science expertise gave political Progressives a theoretical foundation for cautious proposals to create a more activist state…. Professional social scientists composed a tight circle of men who created a space between academia and government from which to advocate for reform. They addressed each other, trained their students to follow their ideas, and rarely spoke to the larger public.

These men founded new organizations—such as the American Economics Association—to promote this new class of experts and their plans for a more centrally planned society. Ultimately, the nature of the expert class was revolutionary. The new social scientists thought they knew better than the patricians, religious leaders, local representatives, and market actors who had long shaped local institutions. Instead,

Progressives were modernizers with a structural-instrumentalist agenda. They rejected reliance on older values and cultural norms to order society and sought to create a modern reordered society with political and economic institutions run by men qualified to apply fiscal expertise, businesslike efficiency, and modern scientific expertise to solve problems and save democracy. The emerging academic disciplines in the social sciences of economics, political economy and political science, and pragmatic education supplied the theoretical bases for this middle-class expert Progressivism.

In the Progressive view, business leaders and machine politicians lacked a rational and broad view of the needs of society. In contrast, the government experts would approach society’s problems as scientists. Johnson felt this model already somewhat existed in the Department of War, where Johnson imagined the secretary of war was “quite free from political pressure and [relied] on the counsel of the engineers.” Johnson imagined that these science-minded bureaucrats could bring a “really economic and scientific application” of policy.

Johnson was part of a wave of experts and intellectuals attempting to develop “a new realm of state expertise” that favored apolitical technocrats who would plan the nation’s infrastructure and industry. Many historians have recognized that these efforts were fundamentally “state-building activities … [and that] their emergence marked and symbolized a watershed in which an often-undemocratic new politics of administration and interest groups displaced the nineteenth century’s partisan, locally oriented public life”.

In short, these efforts sowed the seeds for the idealized technocracy we have today: unresponsive to the public and imbued with vast coercive power that continually displaces private discretion and private prerogatives.

Indeed, the Progressive devotion to expertise followed “the core pattern of Progressive politics,” which is “the redirection of decision making upward within bureaucracies.” Thus, in contrast to the populist political institutions of an earlier time, decision-making in the Progressive Era became more white-collar, more middle class—as opposed to the working-class party workers—and more hierarchical within bureaucracies directly controlled by the state’s executive agencies.

In many ways, then, this aspect of Progressive ideology turned the political agenda of laissez-faire classical liberalism on its head. Liberals of the Jeffersonian and Jacksonian variety had sought to increase outside political influence in the policy-making process through elections and the appointment of party activists loyal to elected representatives. This was because liberals feared that an insulated class of government experts would function more in its own interests than those of the taxpayers.

The Progressives, however, imagined they could create a disinterested nonpolitical class of experts devoted only to objective science.

The fundamental question, then, became who should rule: insulated experts or nonexpert representatives with closer ties to the taxpayers.  We can see today that the Progressives largely succeeded in granting far greater power to today’s technocratic class of experts. The technocrats are praised for their allegedly scientific focus, and we are told to respect their independence.

If the goal was ever to protect public checks on state power, however, this was always an unworkable ideal. By creating a special class of expert bureaucrats with decades-long careers within the regime itself, we are simply creating a new class of officials able to wield state power with little accountability. Anyone with a sufficiently critical view of state power could see the danger in this. Interestingly, it was anarcho-communist Mikhail Bakunin who recognized the impossibility of solving the problem of state power by putting scientific experts in charge. Such a move only represented a transfer of power from one group to another. Bakunin warned:

The State has always been the patrimony of some privileged class or other; a priestly class, an aristocratic class, a bourgeois class, and finally a bureaucratic class.

It is not necessary, of course, to have full-blown socialism to create this “new class.” The modern state with its mixed economy in most cases already has all the bureaucratic infrastructure necessary to make this a reality. As long as we defer to this ruling class of “scientists and scholars,” the Progressives have won.