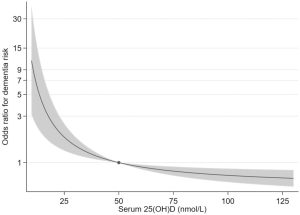 Just imagine that 17% of dementia cases could be prevented with a new drug that cost five cents, had a huge safety margin, and virtually no risk?

The study from the University of South Australia looked at data from 294,000 people in their 60s in the UK, and followed them for a median of 11 years to get 5 million person-years of data. Researchers even controlled for time spent outdoors, types of physical activity, and the amount of oily fish they ate to try to cover for other benefits from these activities.

Seems to me, that if Ministers of Health were interested in actual health, they might be offering free Vitamin D tests, free supplement bottles, lessons in school and public awareness programs. They might even offer testing clinics in shopping centre car parks. Crazy idea right? In the world you thought you were living in, the treasurer might be chasing them down to forecast savings on public health spending ten years from now by keeping 1 in 6 out of nursing homes.

Instead our Departments of Health are apparently pretty keen to approve patented drugs with few clinical benefits that cost $28,000 per patient (and that’s after the price was halved due to the outcry).

Where are the journalists? They’re not asking the Minister of Health any hard questions. This is not the first study to show Vitamin D reduces dementia.

The minimum healthy level of vitamin D is 50 nmol/L, but an estimated 31 per cent of adults in Australia have inadequate vitamin D, increasing to more than 50 per cent in women during winter and spring in the southern states.

The UniSA study found that those with vitamin D of only 25 nmol/L had a 54 per cent higher risk of developing ­dementia than those whose ­levels were 50 nmol/L.

The researchers found 17 per cent of dementia cases could be prevented by increasing vitamin D levels from 25 to 50 nmol/L.

From the paper — there are three ways vitamin D could protect brains — it helps neurons grow, reduces blood clots, and is an anti-inflammatory:

A protective effect of higher 25(OH)D on brain health is biologically plausible and could be explained by at least 3 potential mechanisms. First, the presence of vitamin D receptors in the hypothalamus has suggested a neurosteroid function for active vitamin D, promoting the growth and maturation of neurons (48, 49). Second, there may be vascular mechanisms as active vitamin D has been associated with reduced thrombosis and regulation of the renin–angiotensin system (5). Third, replete concentrations of active vitamin D may act as a neuroprotectant through the suppression of excess inflammatory neurovascular damage caused by proinflammatory cytokines and attenuation of amyloid proteins, commonly observed in Alzheimer disease (3, 4).

June 2021 — FDA rushes through approval of Alzheimers drug which costs $56,000 and reduces beta-amyloid but doesn’t yet show any benefit for memory:

The drug, which is called Aducanumab but will be marketed as Aduhelm, has been shown to reduce levels of beta-amyloid, the sticky plaque that is the hallmark of Alzheimer’s disease, in the brain. HelloCare says the studies have not been able to show the drug slows declines in memory and thinking, and in fact, “two large recent studies have had opposite findings.” In November, a panel of the US Food and Drug Administration (FDA) advisers recommended the agency not approve the drug.

The FDA approved the drug through its ‘accelerated approval pathway’, a fast-track approval process designed to hasten access to drugs that could provide a “meaningful therapeutic advantage” over existing treatments for patients with serious or life-threatening diseases, and where a clinical benefit is “expected” – even if there is still uncertainty about the benefit.

Royal Australian College of GP’s warn that the drug trial results were not that promising, the side effects were significant and the costs prohibitive. The drug may even be dangerous.

Clinical symptoms of ARIA, such as headache, delirium, dizziness and visual disturbance, were present in 24% of those on high dose and remained unresolved in 12% over the study period. And while serious symptoms were only seen in 0.3%, many required hospital admission and treatment with steroids or antiepileptics. Professor Bush says there is growing evidence that ARIA ‘could be hazardous’. ‘It’s not just an imaging anomaly, it actually can be associated with a variety of neurological complications, which indicate that it might not be as safe as has been proposed,’ he said.

This study was not a classic RCT (randomized controlled trial) instead they looked for small random gene changes using a technique called Mendelian randomization to test for causality.