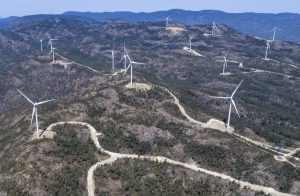 The people making wonder wind turbines are having a tough time. They thought they were picking the hottest new industry, saving the world, and expecting to make great money.  Instead supply chains are in crisis, competition is fierce, and profit margins are razor tight. They know that the solar panel industry has largely gone to China, and worry that wind turbine manufacturing will do the same.

What they don’t seem to realize is that the reason the factories went to China is that the country isn’t powered by wind turbines. No country powered by unreliable power is also a growing manufacturing base. And as well as having cheap coal power, China also has the advantage of cheap slave labor, few environmental rules, no ethics and hardly any red tape. It’s a red-light flasher. About now, a wise investor might be wondering about the the odd disconnect in the idea of building devices to save the world while imprisoning people and polluting lakes. What if the environmental movement is a hollow geostrategic trojan fantasy serving Russians, Chicomms, socialists and investment banker cartels?

For Ben Hunt, the light-bulb moment isn’t there yet. These are the guys trying to make ends meet with real products for real consumers. But they haven’t done quite enough homework.  Ben Hunt thinks carbon dioxide controls the climate and the world needs wind towers.   He thinks “the message isn’t hitting home hard enough” as if showing people more climate-porn-storms will make their industry grow when they’re already at 130% saturation and have been for decades.

One of the first responses I received was very instructive: “When I joined more than 15 years ago, I was told that I was joining the sector with the brightest and most promising future. The problem is that it is a future that seems never to come.”

The Wind Turbine OEM’s (Original Equipment Manufacturer) are struggling to turn a profit, and worry that they can’t compete with China:

It is fair to say that that sums up much of the prevailing mood in the wind turbine OEM sector right now with all the major western OEMs struggling to turn a profit. It is not unusual to hear senior industry figures raising the spectre of the fate of the European solar manufacturing industry, long ago lost to the east.

While everything should be going gangbusters for the highly fashionable, saintly industry, reality is no fun:

Instead the news is full of stories of lay-offs, factory closures and eye-watering financial losses. And the resources required for the necessary investments are in jeopardy.

The fantasy is alive and well even if the wheels are falling off:

Wind is a cost effective, inexhaustible and clean provider of secure energy that isn’t going to further poison the planet.

Somehow, however, that message isn’t hitting home anything like hard enough. At Davos late last month, the discourse turned back towards nuclear, shale and more large-scale fossil to overcome the energy crunch.

Many in the industry believed these arguments long since won, but the fight is ongoing, and I’m really not sure we are winning.

After 30 years of the media doing nothing but glowing soft agitprop for the wind industry, blaming fossil fuels just doesn’t cut it.

..it is time to take the gloves off in the lobbying area. The fossil industry is more established, better resourced and more aggressive. The case for wind and renewables needs to be more forceful and more focused. We have been guilty of being too polite and too naïve, perhaps believing the overwhelming weight of argument is enough. It clearly isn’t.

What part of BP being Beyond Petroleum, and Royal Dutch Shell lobbying the World Bank against coal doesn’t make sense? The gas industry has been trying to demonize coal and CO2 just as much as the renewables industries have.  And so have the bankers — the Goldman Sachs, JP Morgan, BNP Paribas, Deutsche Bank, HSBC, Barclays, Morgan Stanley –they’re all fans of wind farms. But in the end, the world is paying $400 a ton for coal.