Effectively — the AEMO (the Australian Energy Market Operator) is the taxpayer funded advertising agency for the Renewables Industry. The point of the latest AEMO super-report, apparently, is to get Australian taxpayers or consumers to foot the bill for the high voltage lines that the unreliable industry desperately needs but can’t pay for itself.

The AEMO has declared we need to rush to cough up $12.7 billion to build new interconnectors in Australia. That’s $500 from every man woman and child and let’s call it what it is, a Gift Card for the Renewables Industry. The net benefit of all that money will be to allow wind and solar industrial plants to connect their unreliable product to the grid we already have, and to the storage products that we still have to pay for, and all so that their green electrons will make the weather 0.0 degrees cooler in a hundred years. Australians alive today will pay now and basically get nothing but views of more criss-crossy-steel-wires and spires, and more wind towers too. “Sing Hallalujah”.

The 104 page Blueprint imagines all kinds of scenarios except for an actual free market, true competition, consumer choice, or whether it makes any sense to use our national grid as a global climatic weather controller. It’s a fantasy document which includes four flavours of future electrical icecream: “Slow”, “Progressive”, “Step” or “Hydrogen Superpower”. Will that be a double-scoop with Spiderman topping? Yes indeedy — and with $28 billion dollars of imaginary savings to go. The word blackout appears no times. Nor is there a scenario for a “Cost effective” electrical grid. (Remember them?)

These people are either crazy or paid far too much.The Hydrogen Superpower fixation comes straight out of Marvel comic. Wait til you see the graph.

It’s rare to see this much abject nonsense in a single story.  Perry Williams at The Australian just took the junk prospectus and ran it:

Australia must accelerate a move away from coal to renewables and storage and urgently sanction more than $10bn of transmission projects to escape the ongoing threat of blackouts and high power prices amid a national ­energy crisis.

Follow the logic: if having a bit less coal causes a crisis, then how exactly, will having no coal solve it?

The Australian Energy Market Operator, which runs the ­national electricity network, said the country was undergoing a “complex, rapid and irreversible” change to its energy system…

Is this the same “irreversible change” that is currently reversing all over Europe? The one where Germany, France, the UK, Austria and Poland are all using more coal?

And isn’t the follow up just a tiny scary?

an irreversible” …  that would need a nine-fold increase in wind and solar capacity by 2050 to meet the nation’s net-zero emissions targets.

What kind of “rapid” irreversible transition is only 11% of the way out of the starting gate, but already falling over, costing a bomb, and we have to do this nine times more?

But wait. Renewables will not only make floods nicer, and fish happier, it make us safer from enemies?

“One source of energy that no geopolitical situation can interrupt in relation to our supply chains and that’s the sun to our land-mass and the wind on and off our shores. That’s good energy security and storing that is a matter of national security,” Mr Bowen told the National Press Club.

What if the enemy just attacks at night and when there is no wind?

Probably they won’t have to attack at all. As we go broke, they can just buy the nation out from under us.

There they go again: The AEMO calls coal and gas volatile, and renewables cheap

The energy supply crunch that forced the suspension of the country’s power market for the first time this month underscored the need for the Australian electricity grid to curb its exposure to the volatile commodities of coal and gas and fast-track cheap renewables backed up by storage, the AEMO said.

The price of coal and gas isn’t volatile, it’s not going up and down, it’s gone up and stayed up —  because it’s so essential, everyone has to have it and they want more than they can get. And the true price of renewables isn’t cheap, it’s just hidden — like this giant report pretending to hide that twelve billion dollars worth of interconnectors are entirely frivolous parts of a grid powered by centralized reliable power. We don’t need them. The Renewables Industry does.

“I think recent events in Australia and overseas have really just underscored the need for ­urgent investment in renewables, firming and transmission so that we can de-link ourselves from these international factors and provide Australian homes and businesses with the most affordable, secure and reliable energy,” AEMO chief executive Daniel Westerman told The Australian.

Since when was coal and gas an “international factor” for a nation which is the worlds largest exporter of coal and third largest for gas?

The costs of these renewable-interconnectors are staggering 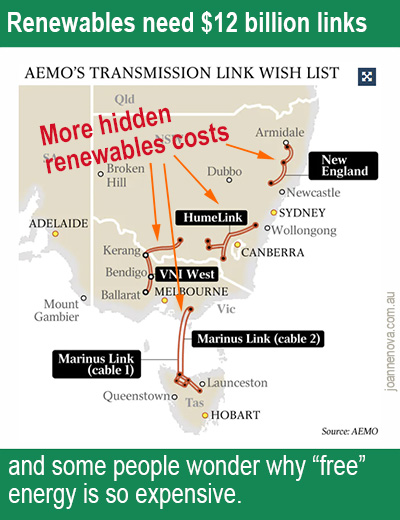 The Marinus Link across the Bass Strait will cost at least $3.8 billion and generate zero watts of electricity. Theoretically it will allow 1.5 GW of electricity to  slip through, but for the same price, we could build a whole new advanced coal plant instead. Various iterations of governments here have already spent $200 million just on the feasibility study. Ten years ago they could nearly build a whole gas plant for that, one that wouldn’t be essentially useless for five months in a row if a shark chewed on it.

The VNI link will cost $2 – $3 billion and make it possible for  groups of renewable investors to make profits they otherwise couldn’t have.  Humelink will be some kind of nightmare of $3b – $5 billion.

The unreliables are dead without these new transmission lines:

To put it in perspective a very annoyed high honcho at Snowy Hydro was not happy with the draft version of this document a few months ago and complained that the AEMO wasn’t pushing hard enough for faster “investment” in the VNI line which, ahem, just happens to be nearer to the Snowy Scheme, and which they wanted a lot more than the link to their competitors in Tasmania.  In that complaint he quietly gave away that these transmission lines are essential in a life and death kind of way for renewables.

[Snowy Hydro] has previously warned the lack of transmission could kill the transition to ­renewables – with a string of major players weighing into the debate – and singled out concerns over infrastructure as a major issue that needs to be confronted to ensure supplies can flow to users.

Renewable developers and network operators are worried a pipeline of power generation and clean energy supplies faces delays or gridlock unless major electricity transmission projects are delivered across the national power system.