Don’t wait for your government Newspeak channel to tell you

On Twitter #Netherlands, massive protests are underway. Farmers have been told to shut farms to reduce nitrogen emissions and they’ve taken to the streets. (It’s not clear if this is purely about fertilizer runoff, or climate change as well.) The word is that supermarket shelves are emptying fast, roads are blocked, but that 75% of the public generally support the farmers and are joining in on foot in some places. Farmers are dumping hay bales in the streets and spraying manure on government offices. There are claims (with footage) that the Dutch government has brought in armored vehicles and is using tear gas. Some video allegedly shows masked police zero in on single peaceful protestors and pull them out.

FARMERS in the Netherlands have staged a huge protest with thousands of tractors lining up to block the German/Netherlands border in campaign against the government’s controversial nitrogen policy.

Protestors demonstrated in front of several public buildings with manure and slurry after politicians voted on proposals to slash emissions of damaging pollutants, a plan which could force farmers to cut their livestock herds or stop working altogether. Prime Minister Mark Rutte’s Government says the emissions of nitrogen oxide and ammonia, which livestock produce, must be drastically cut back close to nature areas, which are part of a network of protected habitats for endangered plants and wildlife stretching across the EU.

Dutch farmers turned out in their thousands to speak out against the World Economic Forum (WEF) climate change policies of their government. 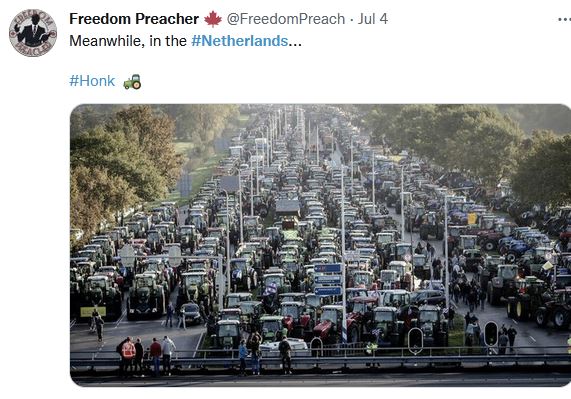 There’s a food crisis brewing, but you wouldn’t know it with the way the European bureaucracy is behaving.

Dutch farmers – who sit as the second-largest agricultural exporter in the world and largest meat exporter in Europe – have brought the Netherlands to a standstill, protesting against Climate Change regulations.

The newly elected government has set up a 55-60 per cent emissions goal by 2030, 70 per cent by 2035, and 80 per cent at 2040. To meet these arbitrary climate targets, they have created a self-inflicted disaster that will see the government drag its agricultural sector up the temple stairs, tear it to bits, and let whatever bloody stumps are left to tumble down the steps for the pleasure of the United Nations climate gods.

Farms which have been feeding the world for hundreds of years are going to be unceremoniously shut and their owners ruined because a couple of bureaucrats decided they didn’t like the nitrogen and ammonia emissions produced by growing food.

The press have attempted to demonise farmers for defying the EU’s virtuous green push – but the Dutch people aren’t listening, with support for farmers still over 75 per cent. 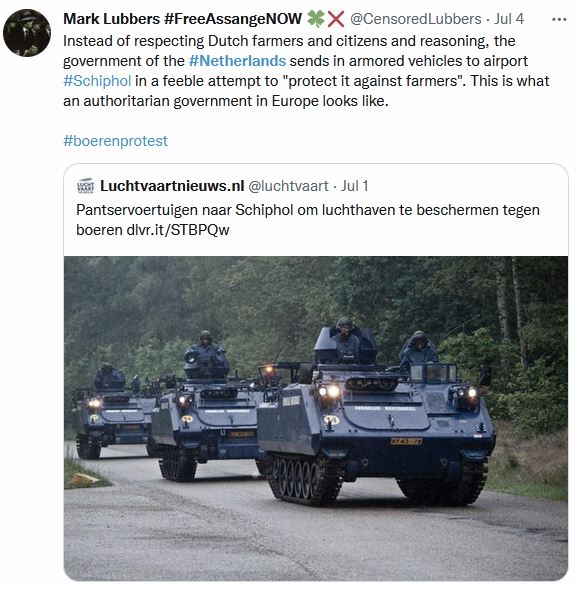