The idea that we could make “a carbon currency” work as an international currency standard, and fix our weather at the same time, is a trap. It’s a scientific quagmire meeting an economic fantasy.  It doesn’t give power to the people, or produce an honest mode of exchange. A carbon currency feeds corruption and centralized unaccountable unelected committees. It serves global bankers who broker the transactions. It is the paper currency from hell.

Where do we start? A bar of carbon “credits” is not a bar of gold. You cannot measure it. It’s often just an atmospheric nullity, an emission something that might have happened but didn’t –– according to someone in line to gain from saying so. A global carbon currency would be instantly prone to massive rorting, corruption, and political whimsy. The largest producer of carbon credits is the Pacific Ocean on a cold day. Should we set up an account for it in Geneva? Do the waters around a nation produce or consume carbon credits? What about the coral reefs, the trees, the bark, the bacteria? Says who? We cannot measure it, so it’s all modeling. May the biggest cheats win and rule the world.

Gold, on the other hand, is the ultimate anti-cheating device. Governments can’t print it, fake it, change the definition of it, or argue over whether it exists. Logically, our paper currencies are simply legalized counterfeiting. The global fiat carbon market would be only as secure as its weakest link — think Zimbabwe. At least some paper currencies are backed by the tax-raising power of democracies, which slows the descent of paper currencies to their true long-term value — zero (think MMT).

Make no mistake — the Carbon market is a fiat currency, not a commodity

Despite the name sounding exactly like an element of the periodic table, the carbon market isn’t counting carbon, nor total carbon dioxide. It’s merely some fractional subpart, a few percent thereof, as defined by a committee of bureaucrats who would control billions of dollars on a whim, and be bought for mere millions, or promises of a glorious golden ambassadorships to New York or Beijing. The carbon market wouldn’t just invite loopholes, it would be one. It’s a loophole to reality — where real CO2 makes the world go round, produced or consumed by every living thing on Earth, and which is only a small player in the global climate controller — vastly outdone by the Sun, by clouds, ocean cycles and who knows what. Carbon (as CO2) is the only “commodity” on Earth that no human can tell whether the container ship is full or empty. Is that certificate real? Was that intention legitimate? Will that CO2 stayed stored in the trees or under the sea? Sure, if you say so.

There are major obstacles to enter the market

In an efficient market, there should be no obstacle to entry or exit. Yet the largest players in a global carbon market can’t play, because they have no brain, like the oceans. Which of these players do nations own with sovereign control, and which do they not? The UN power-games over the definition of the parts of nature that could be included will be the International Monetary Bunfight of the Century, and it will never end. We are carbon life forms. Shall we charge fat people more for their right to breathe? Well, obviously.

Are all carbon rights equal?

What is a carbon-related security backed by the right to emit one unit of carbon dioxide worth?

Does a freezing Inuit have the same right to emit carbon as someone living in the tropics? Do countries with high population growth earn more rights to emit? Would that incentivize baby-production in a world, where some argue that more people means more pollution? Or do we go the other route, where humans don’t count per se, but it’s the right of a nation compared to past emissions, which disincentivizes and punishes nations that grow their population or allow mass immigration. Should we rate the “right” based on distance from global population centers, population density, latitude, rating for “development” proclaimed by some quasimodo UN Index, rorted up the kazoo by nations that earn votes via Belt-N-Road bribes or leverage, or should we just auction the rights to the biggest bribers? What could possibly go wrong? And whose is this magical “we” who decides? Bet it doesn’t include me or you.

Is that a market managed by God…

What happens when a fire wipes out a forest? Was that an Act of God, or arson, or an investment? Was it warfare? Foreign actors might find all kinds of ways to destroy a national account. Currency management might be a cigarette butt thrown out a window on a summer’s day. In another country — sounds like a job for the CIA.

The efficient market hypothesis suggests buyers and sellers act on all available information. But when humans make only 4% of total global emissions, 96% of this market is controlled by the Sun, or phytoplankton, or cosmic rays. Who the heck knows?

Does that carbon credit really exist — was that factory not-built, or closed, purely to claim the credits, or did it create more pollution in order to earn more from closing than it did while running? These environmental frauds have already happened — see HFC-23.

And then there is the awful state of carbon accounting. In 2015 the world found 2.6 trillion undiscovered trees. Despite satellites, 83% of the Earths trees were not counted nor known. The whole world owed carbon credits to the rest of the world.

A theory of carbon currency

We propose a new international monetary system based on carbon currency (the carbon standard) to tackle two pressing externalities in today’s global economic and political context: the dangerous and irreversible effects caused by unconstrained green-house gas emissions and the cost to the rest of the world as a result of the U.S. dollar being the dominated global currency and the U.S. Federal Reserve increasingly implementing monetary policies not aligned with the global common interest. We define carbon currency as standardized carbon-related securities backed up by the right of one unit of carbon emissions. It can be used as a new global reserve currency and functions as an international unit of account. Through the trading of carbon currency, efficient carbon prices are established. By incorporating the cost of carbon emissions into decision making, carbon pricing provides incentives for countries to pursue low-carbon growth, which helps achieve the net zero emissions global goal set under the 2015 Paris Agreement. Under the carbon standard, the external shocks to the international financial system would come from variations of carbon emissions rather than the U.S. monetary policies. As such, monetary authorities’ commitment to maintaining stable exchange rates comes together with monetary policies aiming at pursuing low-carbon growth. The new system potentially poses a plausible solution to the classical Mundellian Trilemma because the objectives of maintaining fixed exchange rate and implementing monetary policy become one. Although several hurdles are constraining the launch of carbon currency immediately, the carbon standard poses a feasible international monetary system as the world-wide campaign to achieve carbon neutrality progresses. 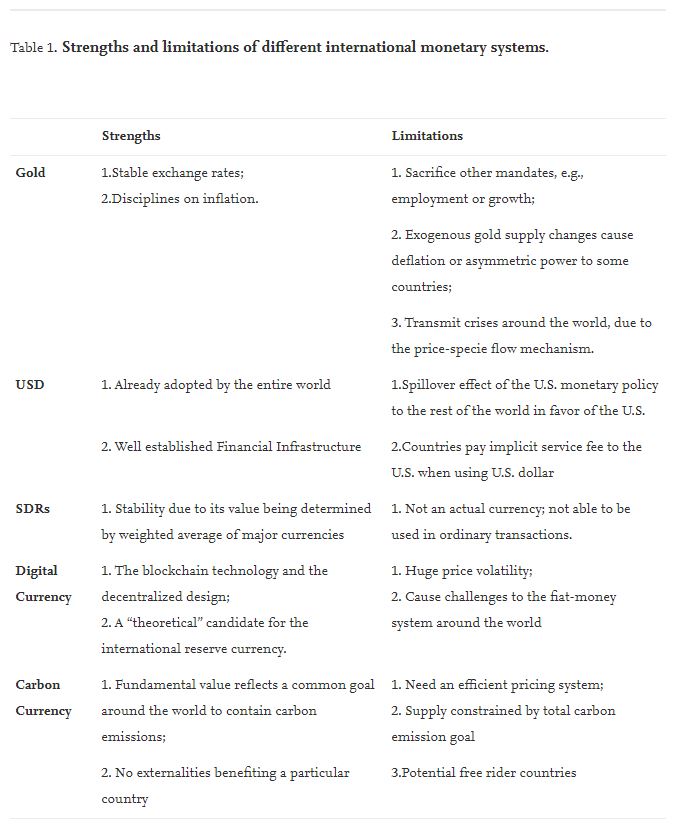 3.4. Other benefits: carbon currency as a medium of exchange and a store of value

As discussed earlier, we do not emphasize much the function of carbon currency as a medium of exchange because it is not the main motivation of introducing carbon currency into the international monetary system. As invoicing currency have been shown to be important, we argue that carbon currency could also be used in international trade. The current trade system has U.S. dollar as the dominant invoicing currency, and both theoretical and empirical studies [2] have shown that an appreciation of U.S. dollar would lead the trade volume of the rest of the world to decline.

And by definition the appreciation of the carbon credit “dollar” would lead to a trade volume decline in every nation on Earth. Carbon dioxide emissions are linked to GDP. The more nations emit, the richer they are.

Nothing about a carbon currency makes sense except to global bankers and bureaucrats. Certain parties are going to grow rich and powerful by using a carbon currency, but they don’t include us.