UVC is the kind of UV that’s more energetic than the UV we get in sunlight. It’s shorter wavelength. Paradoxically, at around 222nm the light is so energetic it is stopped by almost anything — even the layer of dead cells or fluid on the surface of our eye. But for a naked virus floating in the air, UVC is deadly — it will damage all nucleic acids to the point where the viruses and bacteria are unable to replicate. In contrast, for our skin cells, light of the far UVC wavelengths (200 -230nm)  can’t penetrate far enough to cause damage that matters. 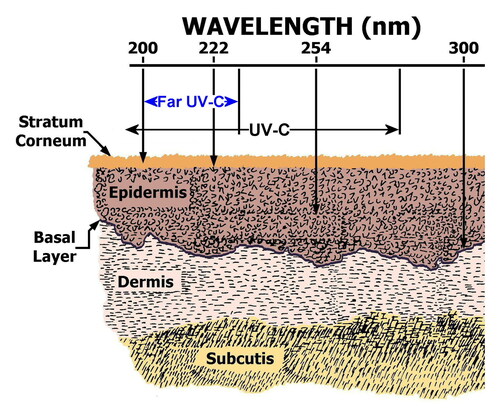 The UVC coming off the sun is stopped by the ozone in the stratosphere, so it doesn’t reach us on the ground. The kind of UV that causes burns, cataracts and skin cancer is from longer wavelength UVB and UVA which can penetrate the surface and damage our DNA.

“Far-UVC light has the potential to be a ‘game changer,’” said David Brenner, professor of radiation biophysics and director of [Columbia  University’s Center for Radiological Research]. “It can be safely used in occupied public spaces, and it kills pathogens in the air before we can breathe them in.”

The research team’s experiments have shown far-UVC effective in eradicating two types of airborne seasonal coronaviruses (the ones that cause coughs and colds). The researchers are now testing the light against the SARS-CoV-2 virus in collaboration with Thomas Briese and W. Ian Lipkin of the Center for Infection and Immunity in a biosafety laboratory on Columbia’s medical center campus, with encouraging results, Brenner said.

The team previously found the method effective in inactivating the airborne H1N1 influenza virus, as well as drug-resistant bacteria. And multiple, long-term studies on animals and humans have confirmed that exposure to far-UVC does not cause damage to the skin or eyes.

Here’s the thing though. That press release was from way back in April 2020. And plenty of papers were released on UVC before Covid-19 even appeared, yet the only nation doing mass installation of UVC, two years later appears to be China.

Do we get the feeling Western Ministry’s of Health don’t actually want to stop this virus – or any virus — spreading?  Are they even trying?

In addition to having all of their Olympic athletes and staff vaccinated, to provide a comprehensive layer of protection, the Chinese national team installed advanced Lumenlabs Lumenizer far ultraviolet disinfection light fixtures throughout their housing and training facilities.

Brenner et al figured out the benefits of far UVC back in 2013, and published  a paper on it in Nature in 2018. So Chinese health departments are reading our papers but where are all the well funded institutions like the FDA, CDC and TGA, UK NHS?

Ever get the feeling that our Western Institutions are completely captured by the Big-Pharma finance project?

Blatchley and Brenner have just released a new paper last month showing that UVC radiation is probably useful for many viruses, and especially for RNA viruses with long genomes (that provide more target material and are therefore more fragile), which is exactly what Coronaviruses are:

UV222 irradiation is at least as effective as UV254 irradiation for inactivation of viruses, with approximately 1 log10 reduction of coronaviruses achieved for each 1 mJ/cm2 of delivered UV-C fluence or less. In other words, irradiation at 222 nm provides roughly twice the rate of inactivation as observed at 254 nm.

Genome size and make-up are key factors governing the response of viruses to UV-C radiation (Lytle & Sagripanti, 2005; Pendyala et al., 2020; Rockey et al., 2020; Sagripanti & Lytle, 2020). In general, larger genomes provide more targets for photochemical damage; therefore, viruses and other pathogens with relatively large genomes tend to be inactivated relatively quickly. The type of genome (either single-stranded [ss], double-stranded [ds], RNA, or DNA) also influences the response of viruses to UV-C exposure. Coronaviruses have the largest known genomes among ss-RNA viruses; this is likely an important contributing factor to the facile inactivation of coronaviruses by UV-C exposure. Viruses with ds DNA genomes are often relatively resistant to UV-C exposure because the complementary nucleic acid strand can facilitate repair within its host (Boszko & Rainbow, 1999; Rodriguez et al., 2014; Shin et al., 2009). The presence of a viral envelope can influence the susceptibility of viruses to exposure to some physical agents, such has heat or shear forces. However, the presence of a viral envelope may not have any influence on the response of viruses to UV-C exposure.

Coronaviruses have strings of RNA that are 26,000 to 32,000 nucleic acids long. It’s enough to encode for about 30 genes (or proteins). So coronaviruses come with more tools than other viruses, but the disadvantage for them is that they are more fragile with such a long chain of RNA. The smallest RNA viruses are Hepatitis D with a genome of only 2,000 nucleic acids.

As a neat side effect, the use of UVC would probably reduce the worst kind of bacterial infections in hospitals as well. MRSA are the dreaded “Golden Staph” bugs that are resistant to most of our antibiotics. 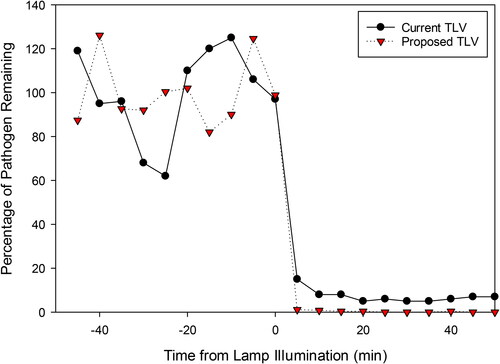 Claims from the people who make the Initus-V UVC system

Far-UVC 200 nm light transmission from the cornea to the lens is predicted to be essentially zero. It has been observed that 207 nm UV light kills MRSA  efficiently, but unlike conventional germicidal UV lamps, it kills very few cells in human cells (19-22). There was no tumor induction in Xpaknockout  mice and wildtype mice by repetitive irradiation with 222nm UVC, using a tumor producing protocol which was shown to produce tumor when irradiated with broadband UVB (23) In a three-dimensional human skin model, 207-nm UV light produced virtually no mutagenic UV-associated DNA lesions,  unlike significant side effects caused by a traditional germicidal UV lamp (24,25). In this way, UVC sterilization is aimed without harming human health when there are people in the environment.