Even the Australian ABC was telling Australians with a straight face that the extreme heat in the UK was so dangerously bad that healthy young people might die in the heat. For most Australians, it’s not summer if it doesn’t hit 40. And for people with a sauna, it’s not fun if it’s not 60 degrees. People enjoy an hour at 60C all the time without  dying. We are mammals, we just need to drink. (And make sure we never forget the kids in the car).

Toby Young at the Daily Sceptic found the perfect study released last week reminding us of how deadly UK heatwaves are:

The eighty fold difference shows how serious a UK winter is, and how beneficial a little global warming will be. Even here in hot Australia six times as many people die of the cold not the heat.  Nothing kills as many people as the moderate cold — partly because Vitamin D deficiency is so much more common in winter. If only our Health Departments could solve that?

When winter comes, if UK energy bills ‘hit more than £3,300 a year’, sadly, energy poverty will kill even more people than usual.

From the study we see that the Urban Heat Island effect is very real, and almost certainly saves many more people than it kills:

The team found that London had the highest heat-related mortality rate, with 3.21 excess deaths per 100,000 people, which translates to 170 heat-related excess deaths each year. Heat-related risks were also much greater in urban areas across the two countries.

When the Bureau of Meteorology is issuing it’s first ever Red Extreme Heat Warning it’s like sauna’s just don’t exist: 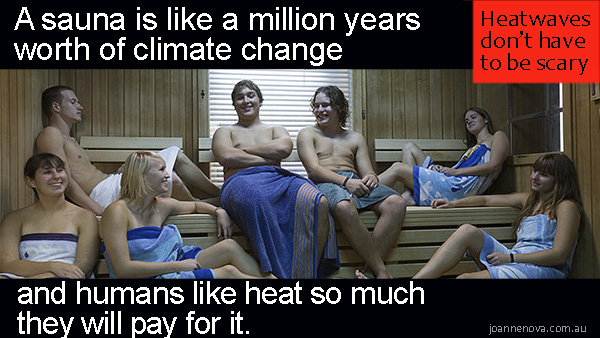 The Red Extreme Heat warming might be a record new announcement — but when exactly, did the Bureau of Met first devise the Extreme Heat Warning scale? How many years has it sat there unused?

London School of Hygiene and Tropical Medicine issued their study with the snappy title that concisely summed up nothing:

Headlines like that hide the news in plain view. Imagine the blockbuster front page expositions if the result had showed heat was more deadly? Not only would it have been short and punchy and conveyed the message, but the study would have become a mantra on the Nine O’Clock News.

Lancet Planetary Health study here — even if they can’t do headlines, it sounds like a decent job with the data.

The researchers analysed 10.7 million deaths that occurred in England and Wales between 2000 and 2019 across over 37,473 small areas that include around 1,600 residents, also known as lower super output areas (LSOAs). They then linked these data with high-resolution gridded temperature maps and potential drivers of vulnerability to heat and cold, including demographic and socio-economic factors, health and disability, housing and neighbourhood, landscape, and climatological characteristics. This allowed the researchers to characterise differences across small areas and map variation in temperature-related mortality risks across the two countries.