Even by BBC standards, this article is disgracefully dishonest and misleading:

People on social media have been comparing the high temperatures in much of the UK with the heatwave of 1976, suggesting that the severity of the current hot weather is being exaggerated.

So, what does the evidence show?

The peak that year was 35.9C. That has been beaten by the current temperatures, with 40.3C recorded so far.

The heatwave of 1976 started in June and lasted for two months. There was a lack of rainfall and a significant drought, with the government enforcing water rationing. 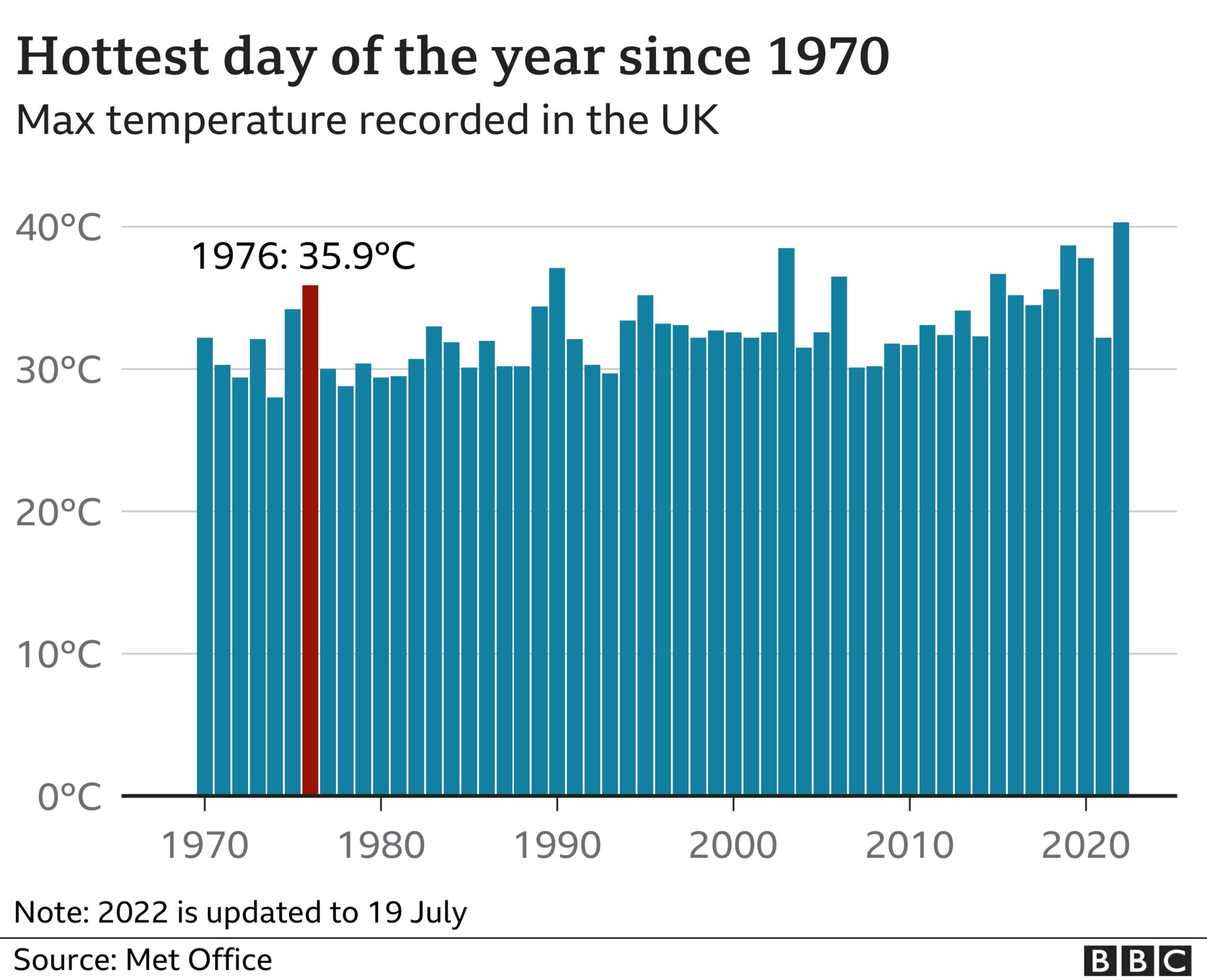 The UK has been slowly getting warmer since the 19th Century, and this has sped up. In the past three decades the country has become 0.9C warmer on average, according to the UK State of the Climate report in 2020.

Nine out of ten of the hottest days ever recorded in the UK have been since 1990, according to the Met Office.

1976 ranks 13th in the list of the hottest UK days on record (some of these, not shown in the chart above, have occurred in the same year).

Suggestions that there is nothing unusual about this heatwave appear to have found a willing audience among climate change sceptics.

Hundreds of people have shared their experiences of the 1976 heatwave on social media, with some making the misleading suggestion that the current heatwave is "no different".

Others have accused the Met Office and the media of spreading "alarmism" and "hysteria". Some have suggested people need to "toughen up", describing those complaining about the heat as "snowflakes".

But even in the 1976 heatwave – which saw lower temperatures – excess deaths in parts of the country were up 30%.

The comparison with the 1976 heatwave has also proven popular among users sharing conspiracy theories – including unfounded claims that a "climate lockdown" is about to be imposed.

There is only one misleading comparison, and that is this BBC piece. To make it worse, it is presented as a Reality Check, rather than just an opinion.

The whole point about the comparison with 1976 is that this heatwave lasted two days, whereas the 1976 heatwave lasted for weeks, albeit that it did not peak at such a high temperature. And most people would agree that 1976 was a much more intense event because of that.

However to the climate extremists at the BBC, it is heresy to claim that weather was worse in the past! Consequently they do not address this issue at all, and merely concentrate on one day of heat.

They then go on to dismiss anybody who disagrees as ignorant deniers.

So, given that the BBC are afraid to tell its readers the truth, here it is. You can make your own minds up as to which summer was most extreme.

Below are the daily maximum temperatures for the CET, from June 1st to July 21st. For this period, the average temperatures were 23.9C in 1976 and 21.6C this year:

This year, there have been only two days above 30c, compared to eight in 1976. Moreover these eight occurred between 28th June and 7th July, a span of ten days when the temperature did not dip below 29.7C.

Finally let’s debunk once again the lie about heatwave deaths:

“But even in the 1976 heatwave – which saw lower temperatures – excess deaths in parts of the country were up 30%.

During the last hot summer we had in 2018, there were less deaths in summer than any other season. And that summer also recorded the second lowest percentage of annual deaths in the decade:

The BBC have shown their contempt for ordinary people, who dare to question the climate dogma.