Wokism is just another cycle of the bossy righteous social climber, and it will be defeated, not when we take them seriously, but when we laugh at them.

Nothing is funny any more, all jokes are microagressions. The world’s unctuous busybodies are humorless sods, telling everyone to eat bugs and arm themselves with solar-panel-shields to stop the tide. They pretend to care for the poor while they condemn them to poverty. They earn points in invisible beauty contests while they accidentally raze forests, kill bats, and slaughter birds in a quest to be holier than the guy next door. The only thing they care about is themselves.

Nick Cater reviews a new book by Noah Rothman that sounds like a good read. The point I appreciate the most is that humans have gone through these waves of righteous madness before and that there will be an end, and the more we mock them, the sooner it will come. 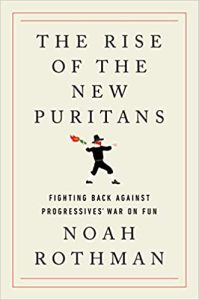 From the Publisher:   The New Puritans can judge a person’s moral character by their clothes, Netflix queue, fast food favorites, the sports they watch, and the company they keep. No choice is neutral, no sphere is private. Not since the Puritans has a political movement wanted so much power over your thoughts, hobbies, and preferences every minute of your day. In the process, they are sucking the joy out of life.

Welcome to the new age of puritanism where stand-up comedy has been replaced with performative piety. It doesn’t have to be funny, it just has to contribute to the fight against systemic evils and the creation of a less shameful society.

Like Hollywood directors, artists and athletes, comedians are no longer tasked with delivering enjoyment for its own sake. They must convey the correct moral and political message or risk being deplatformed.

The enthusiasts driving this culture of moral conformity have more in common with their 17th- and 18th-century puritan forebears than they care to imagine.

Not surprisingly, the requirement comedians be both earnest and funny is threatening to kill off the business altogether. In 2008, comedy movies accounted for 25 per cent of Hollywood box-office takings. Ten years later comedy was reduced to just 8 per cent. Comedy box-office receipts had more than halved even as overall revenue had grown larger.

These striking comparisons between puritans old and new are drawn in a new book by US conservative commentator Noah Rothman. Others have compared today’s progressive ideology to a fundamentalist new religion replete with dogma, liturgy and conformity with a narrative of sin and redemption. Rothman goes further, explaining earlier generations of puritans sought more than personal salvation. They were engaged on a utopian, messianic mission not dissimilar to the people we today consider as woke. Puritanism was more than a religious creed, “it was also a program for society” furthered by the good work of the righteous.

Whatever it is, it’s not about respect:

The new puritans bring their morality to bear on the food we eat. The production of meat and other animal products is causing global warming, they claim. The world must move to a vegan diet supplemented only by bugs, the only type of fauna considered to be acceptable for human consumption. The absence of meat is seen as a virtuous form of self-denial.

“Proponents of this sort of thing seem constitutionally incapable of arguing in favour of a bug-heavy diet because you might actually like it,” writes Rothman. “For the New Puritans, a smug sense of self-satisfaction is the most delicious dish of all.”

We can feel the witchhunts of cancel culture rising to new absurd heights, but there is a self-limiting nature to it. The more righteous they get, the more there is to laugh at. All we need are more people with the spine to laugh out loud.

Nick Cater is executive director of the Menzies Research Centre.