All hale the clean green energy reset — where people are being warned to get ready to live in colder, darker houses, and big energy users will be offered money to stop work. Make plans to turn that factory off! Buy candles!

The UK sits on a giant gas storage site they could have tapped 10 years ago. Instead costs are up so much Ofgem has warned this could push around 12 million people into fuel poverty which is one in six people in Great Britain. The energy price cap is projected to hit around £3,200 (maximum annual tariff).

Apparently even newspapers are getting thinner. High energy costs make everything expensive.

Back to the dark ages? Now millions of Britons could be told to switch off the lights and turn down the thermostat to avoid blackouts this winter under emergency plans

Households might have to turn down their thermostats and switch off lights to avoid blockouts under emergency plans.

To avoid rolling blackouts in the UK, the National Grid could also pay some large energy users to use less power to ease the pressure on the grid.

…with the energy price cap tipped to soar to around £3,200 (maximum annual tariff) in October, industry regulator Ofgem has warned this could push around 12 million people into fuel poverty.

Those that frack, get cheap gas

Benny Peiser from NetZeroWatch said natural gas prices in Europe are ten times higher than in the US because Europe is not using its shale resources.  Which leads me to this rather blistering graph by Wikideas1.

But the UK Business Secretary, Kwasi Kwarteng, says it won’t help if the UK develops some more gas wells. The UK  has “no supply issues”  —  he declared in magical-economics — the energy crisis is just a “price issue”. Perhaps if we just ask nicely?

Meanwhile Greanpeace are doing everything they can to help Russia:

Greenpeace accused of siding with Putin and putting British security at risk
The Daily Telegraph, 26 July 2022

The eco campaign group claims Shell was wrongly granted a development licence for the Jackdaw field without proper environment checks last month, in defiance of the UK’s climate commitments. It has brought a legal challenge against the Government and is vowing to frustrate other schemes brought forward in the North Sea as well.

Gas supply from Russia is “near zero”, storage is medium, and prices for gas and coal are wildly high. 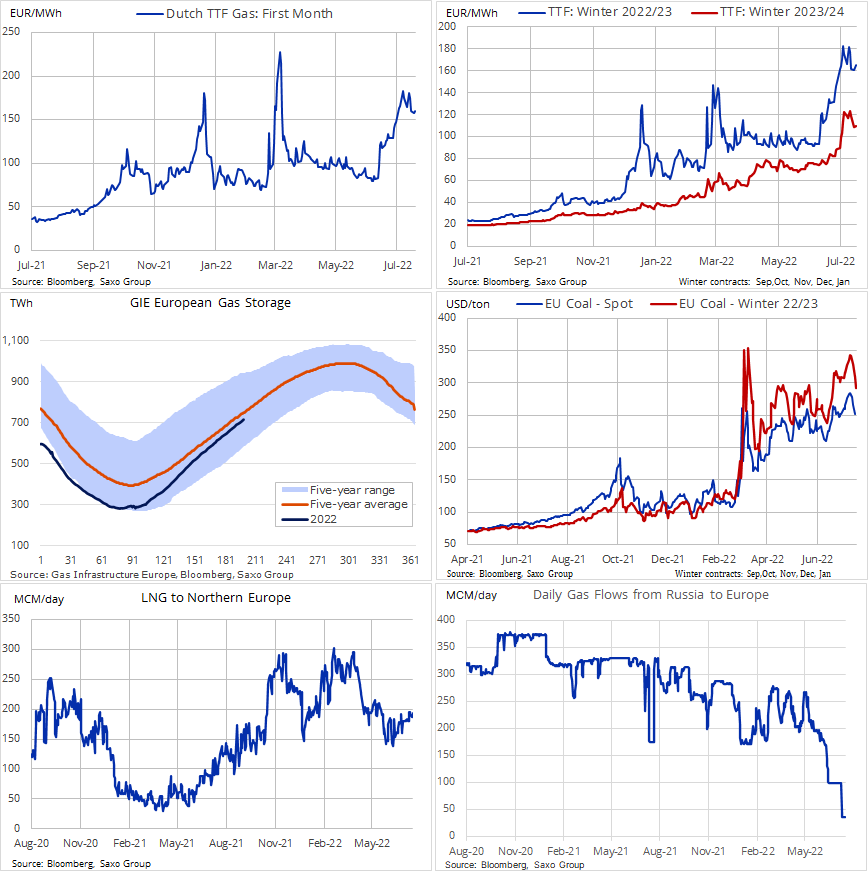 Things are so bad, Poland is even offering to hire the old nuclear power plants that Germany has vowed to shut down.

A group of Polish lawmakers have presented Germany with a proposal to lease the country’s three remaining nuclear power plants, which, despite the energy crisis in Europe, the German government has maintained its commitment to shut down. “If the Germans do not want to use their nuclear energy themselves, they should lease it,” argued Polish MP Paulina Matysiak of the Lewica Razem (Left Together) party. — Kurt Zindulka, Breitbart

Poland wants to build its own nuclear plant but it won’t be finished til 2033.