Russia has cut gas supply again, arguing over turbine paperwork, so gas is predictably, hitting record prices. But a new survey shows even before this latest drama 15% of German industry was already cutting production. Many others are planning to or were considering moving. In other news, rather frantic landlords in Germany want to be able to restrict temperatures of their tenants units.

Now they tell us:

“Gas is now not only part of Russia’s foreign policy, but possibly also part of the Russian war strategy,” said [Klaus Müller, the president of Germany’s Federal Network Agency, Bundesnetzagentur]

If only someone saw that coming, like say, in 2018, when Germany had plenty of time to make sure energy didn’t become a threat to national security?

With Nord Stream 1 flowing at just 20% of capacity from July 27, Germany will NOT have enough natural gas to make it throughout the whole winter **unless big demand reductions are implemented**. Berlin will need to activate stage 3 of its gas emergency program

“The European gas crisis continues to escalate. Gas prices have returned to levels only seen in March as Nord Stream flows dwindle, while the outlook for winter looks bleak for European consumers,” BCS GM said in a note. 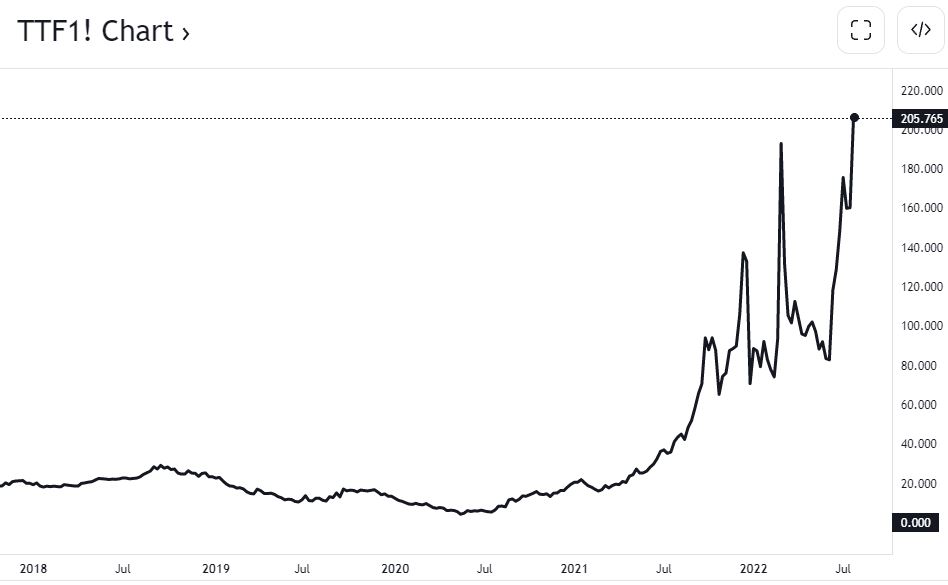 And so it begins: According to the DIHK survey of 3,500 companies the energy intensive industries are suffering so much they have to move or shut down.

One of every six German industrial companies feels forced to reduce production due to high energy prices, a survey by the Association of German Chambers of Industry and Commerce, DIHK, showed on Monday.

Nearly a quarter of the companies forced to reduce production have already done so, and another one-quarter are in the process of scaling back production due to sky-high energy prices, according to the survey of 3,500 companies from all sectors and regions in Germany.

The survey also showed that only half of Germany’s industrial companies have covered their annual 2022 gas requirements via contracts. More than a third of industrial firms still have to buy more than 30% of their annual gas needs.

Germany’s second largest private real estate group, LEG Immobilien, says “”I believe that in the current war situation, the population in Germany must be made aware that renunciation is now the order of the day,” CEO Lars von Lackum told the Handelsblatt.