For years the average wholesale price was somewhere between $30 and $60 per megawatt hour for electricity on the Australian national grid. But for the entire 2,184 hours of quarter two this year, we were paying an average price of $264 per megawatt hour. It wasn’t just due to a couple of freakish spikes, instead it was a relentless burning average, like a lava flow arrived at your wallet.

At an average operational demand of 22GW, that’s a hefty $12.7 billion dollar price tag for 91 days of electricity.  Last year the same period it cost $4b. Years ago, before we added all the unreliable generators, it would have cost $2 billion.

It would have been cheaper just to build a whole new power plant last year.

The graph below covers the century so far. It is that bad. 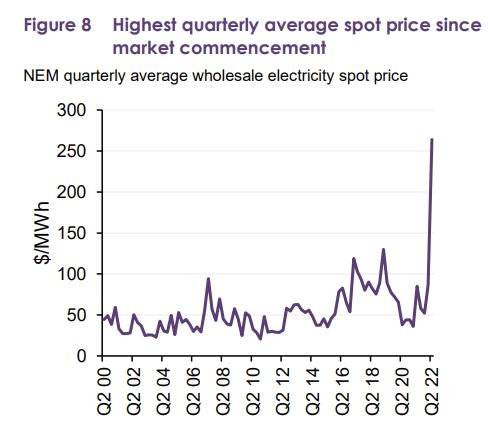 It wasn’t that there was a particular time of the day when prices were higher, instead every hour was a bloodbath.  It was a phase change. There was no happy hour at this hotel. 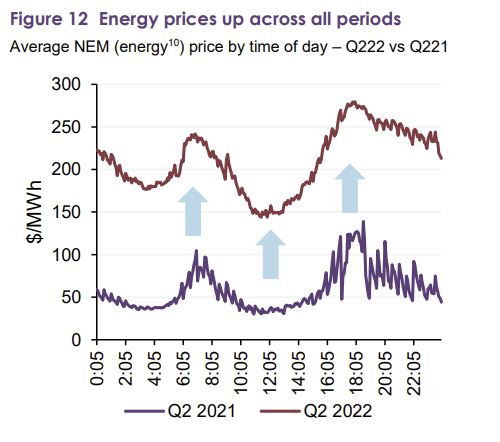 And it didn’t matter whether a state was renewable-heaven or a den of black-coal. Prices were shocking in every state, suggesting  that adding more unreliables won’t save us, just like they didn’t save South Australia or Tasmania. The whole system together is failing. (Isn’t unity wonderful?)

The system was stretched to breaking.

The one thing we know, the only path back, is to a time when the system was more flexible and had more inner strength — more reliable energy, where it had enough spare capacity to shift dependence away from gas and black coal.

Not surprisingly, it was mayhem on the bridge last quarter. The AEMO forecast more than 400 separate lack of reserve warnings (called LOR’s) in the second quarter, compared with 36 in the March quarter and 73 a year earlier.

And the pain just kept growing. Every month worse than the one before.  Almost like we used up the slack in the system in April, then there was nothing to fall back on. The gas stocks were drained, the transmission lines couldn’t be fixed fast enough, and even the rivers were full, so we couldn’t run the Hydro dam without flooding the fields downstream.

I’ll have more to say soon. But while many are blaming a string of things, the truth is, there is one over-riding factor that screwed the Australian grid, and it was when someone decided to use it to control the weather. If brown coal plants were still respected, we could have left some gas in the storage vaults and saved enough money to build two hotter, cleaner new brown coal plants.