Since Twitter decided to block the upstanding, excellent Epoch Times, I feel therefore obliged to make sure that The Epoch Times gets more attention, not less.

Tell your friends, spread the word. If Twitter deems an Epoch page Unsafe, you definitely want to go there. Just click through. Or go straight to The Epoch Times. Who needs Twitter?

We’re in an information war. We must know the enemy. Shore up lines of communication.

If you find yourself self-censoring your commentary for fear of being cut off, remind yourself that that’s exactly what they want. Ownership…

The social media company ‘must explain itself for this outrageous act of censorship,’ Senator Marco Rubio says 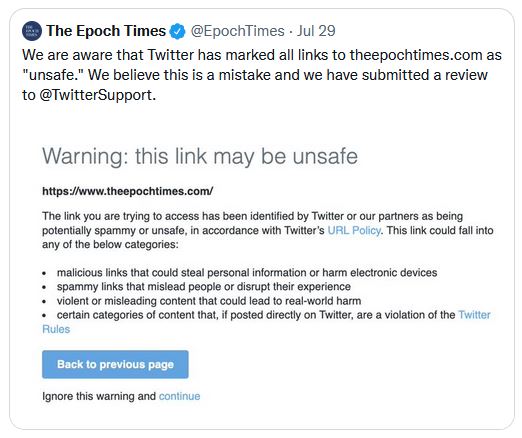 The Epoch Times was founded in 2000 by Chinese Americans who fled communist China and sought to create an independent media outlet to bring uncensored and truthful information to the world.

At least 10 staff members for The Epoch Times were arrested that year in China, with one editor-in-chief spending a decade in prison.

While operating outside of China, the media outlet has remained a consistent target of attacks from the Chinese regime over the past two decades.

If you have a Twitter Account, either get out now, or use it as a tool knowing they will whip it away when it suits them. Figure out an exit plan for when they cancel you, because it will come when you are most effective. Tell followers where to find you when the censors axe falls. Collect email contacts somehow now. Check out the competition: The Gab’s, Parler’s, Truth Social. …. Anything but Twitter.