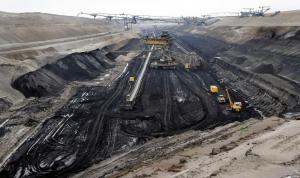 Germany’s assorted energy fixations or ‘green dreams’ have caught up with it in a big way. Some are due to climate obsession, others not. Now that expensive gas is hard to come by since the Ukraine conflict started, and its nuclear power is nearly gone, coal is the only option left for reliable electricity generation. Back to the future, except with obsolescent power stations.
– – –
Berlin has realized it will never again import as much energy from Russia as before the Ukraine war.

So the challenge is to wean Germany off its dependence on Russian energy sources, and quickly.

The question is how, says DW.com.

Starting this week, German hard coal-fired power stations are restarting operations, which were being phased out because of the hugely detrimental climate impact on a world already ravaged by global warming. Germany’s goal had been to phase out all coal-generated electricity by 2038.

But now, the government is swallowing the bitter pill of allowing coal-fired power back onto the grid. It is hoped that this will replace the gas-fired electricity that currently makes up some 10% of Germany’s overall energy mix.

Chancellor Olaf Scholz spoke of temporary emergency measures “imposed for a very short period of time that don’t take anything away from our climate targets.”

“What must not happen is that we slide into a global renaissance of fossil energy, and coal in particular,” the chancellor warned.

But at first glance, last year’s global data seems to suggest that is precisely what is happening: never before has the world used so much coal to generate so much electricity. And the International Energy Agency (IEA) warns that the same pattern of high demand and high production will be repeated this year.

Alexander Bethe, chairman of the Board of the Berlin-based Association of Coal Importers, is sure of that: “This winter, we will certainly import over 30 million tonnes of hard coal to keep our power stations in operation. That would be 11% up on 2021.”

Before the war in Ukraine, 50% of the coal for Germany’s power stations was imported from Russia.