Alarmist climate research centers like the Potsdam Institute and the unquestioning media have been claiming for years that the Jet Stream is weakening, hence this would lead to greater weather extremes across the northern hemisphere due to blocking. Responsible for this of course is man-made global warming.

But a recent paper by Samantha Hallam et al published in the journal Climate Dynamics looks at the seasonal to decadal variations in Northern Hemisphere jet stream latitude and speed over land for the period 1871–2011. The authors were unable to find any weakening of the sort climate alarmists have been warning about.

Quite to the contrary, the authors in fact found that the winter jet stream over the North Atlantic and Eurasia has increased in average speed by 8% to 132 mph. The authors found the 141-year trends in jet latitude and speed show differences on a regional basis and that jet speed shows significant increases evident in winter (up to 4.7 ms −1 ), spring and autumn over the North Atlantic, Eurasia and North America. Over the North Pacific, no increase was observed. 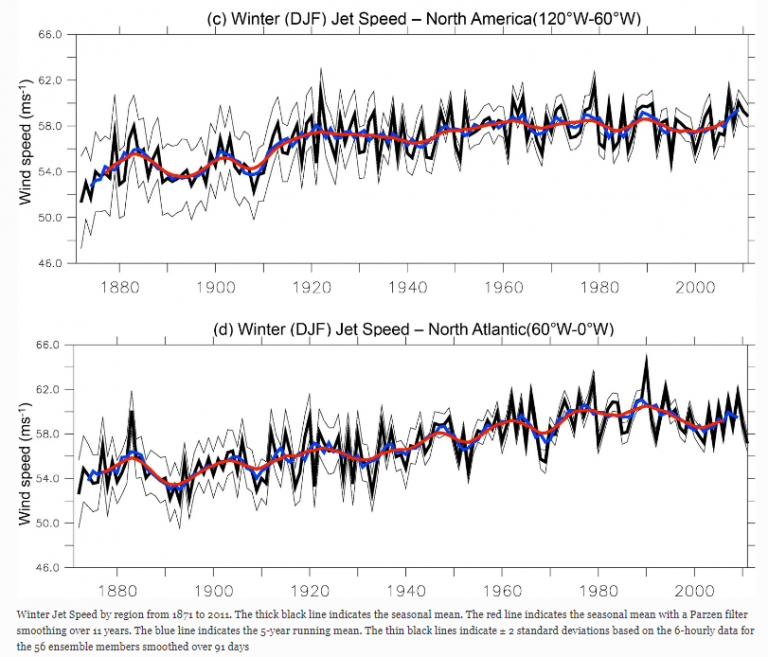 Moreover, the Jet Stream was found to have shifted northward by some 330 kilometers. Overall, the paper’s findings contradict the claims of a weakening Jet Stream regularly made by the climate alarmists and their media minions.

Applying climate alarmist science, we’d have to conclude now, due to the strengthening Jet Stream, less weather extremes should be expected. This would be good news of course. But don’t expect the fear-porn media to look at this.