Finally 19 US States are hitting back at BlackRock the financial behemoth, and not a day too soon.

A light in the tunnel…

By a pure dollar reckoning, BlackRock is the third largest “foreign entity” in the world, after the USA and China, but its core business, its reason for existing is a contradiction: it claims to be an asset manager but acts like a political power. With neither citizens, land nor an army, it’s a kind of toxic financial bubble on a roll — part illusion, but still swallowing economies, minds and electricity grids.

BlackRock is supposedly investing funds on behalf of its customers while using those same funds to promote Woke political agendas that its management may like, but that its own customers may disagree with. It’s a totalitarian force that consumes democratic choices by force of money. Finally some state legislators are calling out the contradiction. Does BlackRock serve its customers or “the management of BlackRock”?

BlackRock is enormous, but it’s not untouchable, and if retirees and State pension plans pulled their money and filed writs for breaches of law, the activist-agency could vanish overnight. BlackRock has $10 trillion in assets to wield as an activist hammer, but those assets mostly belong to other people. BlackRock can only keep weaponizing that money as long the the other people let them. Underneath that big financial hammer is a $152 billion dollars in total assets belonging to BlackRock, and that’s shrunk from $240 billion dollars worth back in 2014.

Send this to your elected representative, your retirement fund and ask about their own “Fiduciary Duty” and “Duty of Care”.

Pay attention to your retirement funds. Money left unattended may be used against you…

Time to boycott the boycotters

Leading the way, West Virginia has announced last month that it will not do business with any firms that boycott the fossil fuels industry — which means Goldman Sachs, JPMorgan and BlackRock, Wells Fargo, and Morgan Stanley. These companies are now ineligible for state banking contracts worth about $18 billion a year. Brilliant.

“At the end of the day, all we want is for banks to act like banks,” [Treasurer Riley Moore] told the Washington Free Beacon, adding it would be hard for the state to continue functioning without the coal industry.

In June, Moore gave the firms 30 days to provide the Mountain State’s treasury with proof they supported the coal, oil, and natural gas industries. “I simply cannot stand by and allow financial institutions working against West Virginia’s critical industries to profit off the very funds their policies attempt to diminish,” Moore said.

Billions of dollars of US State Pension funds are wrapped up with BlackRock. They don’t have to be.

This is round two of an exchange between the State AG’s and BlackRock. Here the state AG’s write to Mr Larry Fink, CEO of BlackRock, Inc. on August 4th, 2022 in reply to his letter claiming BlackRock is neutral, and just engaged in climate dialogue.

Based on the facts currently available to us, BlackRock appears to use the hard-earned money of our states’ citizens to circumvent the best possible return on investment, as well as their vote. BlackRock’s past public commitments indicate that it has used citizens’ assets to pressure companies to comply with  international agreements such as the Paris Agreement that force the phase-out of fossil fuels, increase  energy prices, drive inflation, and weaken the national security of the United States. These agreements  have never been ratified by the United States Senate. The Senators elected by the citizens of this country determine which international agreements have the force of law, not BlackRock.

There are six key points (as translated by me, with a few quotes):

“Rather than being a spectator betting on the game, BlackRock appears to have put on a quarterback jersey and actively taken the field.”

BlackRock’s commitment to the financial return of state pensions should be undivided. Many of our laws state that a fiduciary must “discharge [their] duties solely in the interest of the participants and beneficiaries . . . for the exclusive purposes of . . . providing benefits to participants and their beneficiaries; and . . . defraying reasonable expenses of administering the system.” The stated reasons for your actions around promoting net zero, the Paris Agreement, or taking action on climate change indicate rampant violations of this duty, otherwise known as acting with “mixed motives.” As one commentator has put it: “Acting with mixed motives triggers an irrebuttable presumption of wrongdoing, full stop.” Whether mixed motives arise from a desire to save the world or attract investment from European or left-leaning pension funds, is ultimately irrelevant to the legal violation. Investors have wide latitude over their own money, but our state pensions must be invested only to earn a financial return.

In the Wall Street Journal the Arizona AG Mr. Brnovich, is scathing: BlackRock is neither neutral, nor likely to succeed

If asset managers have committed to push portfolio companies to attain net zero, how is the choice of approaching the “energy transition” left to the client? Even if BlackRock allows clients to vote their shares, BlackRock has pressured public companies long before any vote occurs. It appears that all clients buying BlackRock funds are forced to support ESG whether they like it or not. These actions raise more questions. 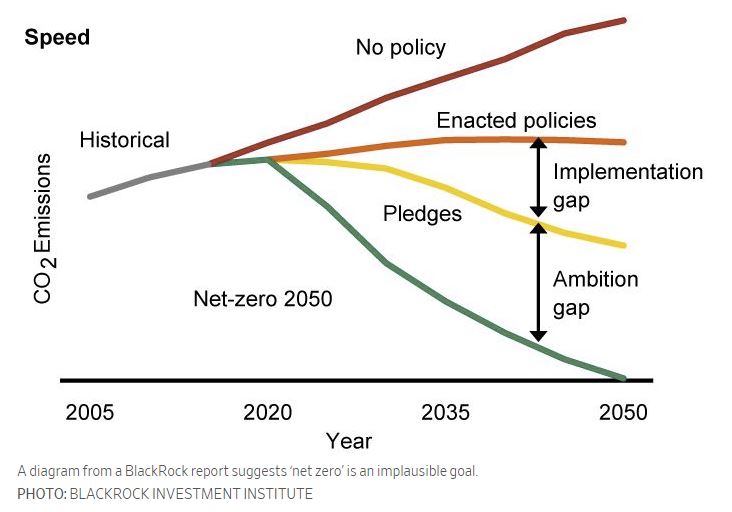 BlackRock is betting on the Green line…

The diagram nearby, taken from a BlackRock report, shows that governments are neither implementing nor pledging policies that would achieve net-zero greenhouse gas emissions by 2050. Would a prudent fiduciary bet everything on the green line?

Perhaps the trajectory for net zero will change. Perhaps a U.S. president with 40% approval ratings will build enduring majorities in Congress with a coalition that supports destroying the American energy sector and, in turn, perpetuating high energy prices, low economic growth, and inflation. Perhaps leftist Democrats will attain majorities sufficient to enact the Paris Agreement, impose a carbon tax, hold the presidency for decades, and subsidize green products until a “thousand Solyndras bloom.” Perhaps the world will ignore aggression by Russia and China to stay on track with emissions targets. Perhaps the U.S. will cheerfully shovel $8 trillion into China by 2030 for green investments, which is the amount BlackRock’s public documents state China needs to keep on track for net zero 2050.

Group boycotts, restraining trade, or concerted refusals to deal, “clearly run afoul of” Section 1 of the Sherman Act. Section 1 prohibits “[e]very . . . combination . . . , or conspiracy, in restraint of trade or commerce.”

BlackRock’s actions appear to intentionally restrain and harm the competitiveness of the energy markets. Disturbingly, a survey last year from the Federal Reserve Bank of Dallas asked: “Which of the following is the primary reason that publicly traded oil producers are restraining growth despite high oil prices?” Sixty percent of respondents referenced a form of “investor pressure.”

The key words are fiduciary duty and antitrust

At the core of the pushback is the idea that the global guardian of citizens funds is supposed to be investing their capital for the best return possible. It’s not supposed to be using their money to pursue Woke, activist agenda’s or punish companies according to the personal whims or profits of the management team.