Roger Pielke Jr: What the media won’t tell you about drought in Europe


[…] Europe is in the midst of what has been called the worst drought in 500 years. According to a drought expert with the European Commission in comments last week:

"We haven’t analysed fully the event (this year’s drought), because it is still ongoing, but based on my experience I think that this is perhaps even more extreme than 2018. Just to give you an idea the 2018 drought was so extreme that, looking back at least the last 500 years, there were no other events similar to the drought of 2018, but this year I think it is really worse than 2018."

While a full analysis of the ongoing 2022 European drought remains to be completed, so too the drought itself, it is clearly exceptional if not unprecedented. In this post I take a close look at the state of understanding the possible role of climate change n this year’s drought.

Specifically, I report on what the most recent assessment report (AR6) of the Intergovernmental Panel on Climate Change (IPCC) and underlying literature and data say about the detection of trends in Western and Central European drought and the attribution of those trends to greenhouse gas emissions. The figure below shows the specific region that is the focus of this post, which includes all of Germany, most of France, Hungary, Poland, Ukraine, and western Russia among other nations. 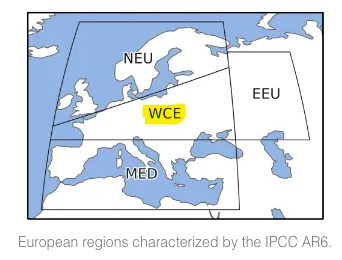 In general, for the other three regions in the above map the IPCC expects with varying levels of confidence at at different levels of warming by 2100 drought to decrease in Northern Europe (NEU, which includes the UK), increase in the Mediterranean (MED) and to be highly uncertain in Eastern Europe (EEU). I will be happy to explore these other regions in depth in a future post. (See IPCC AR6 Chapter 11 if you’d like to explore for yourself.)

For Western and Central Europe, and especially for Germany and Northern France which are the subject of considerable news coverage right now, accurate representations of the current state of scientific understandings of drought are typically absent. Instead, we see many confident claims by journalists and some scientists of that this year’s drought is a signal of (or, if you prefer — fueled by, linked to, evidence of) human-caused climate change.

Let’s take a look at what the peer-reviewed literature and the IPCC actually say about drought trends in this region and their possible attribution to climate change.

One recent study — Vincente-Serrano et al. 2020 — looked at long-term trends in drought in Western Europe from 1851 to 2018, with a focus on precipitation deficits. (Note that their geographical definition of Western Europe differs slightly from that of the IPCC). The figure below shows trends aggregated for the region as a whole. They conclude: “Our study stresses that from the long-term (1851–2018) perspective there are no generally consistent trends in droughts across Western Europe.” 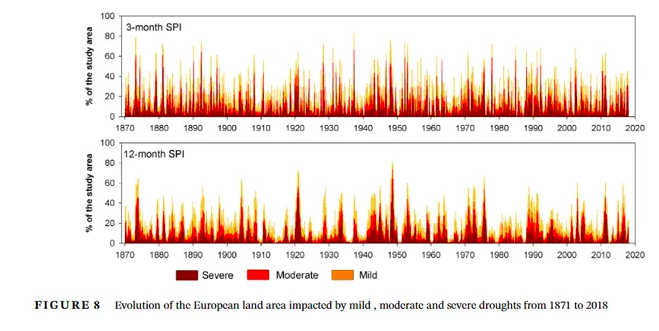 "We emphasize that our findings should be seen in the context of the drought metric applied. Our assessment of drought characteristics is based on SPI, which is a precipitation-based metric. For a long-term assessment of drought in the region, it is not possible to use metrics that employ other important variables (e.g., streamflow, soil moisture, or AED)."

Another recent study — Oikonomou et al. 2020 — looked at more recent trends, from 1969 to 2018, and inclusive of all four of the IPCC European sub-regions. They found overall:

"Seemingly, one of the central outcomes of this research is that there is little change in drought characteristics for 1969–2018. It also seems, no particular tendencies for more or less frequent droughts in the two major geographical domains of Europe are present. This reinforces the stochastic nature of the drought natural hazard."

Of course, as the studies above acknowledge, trend analyses can be sensitive to start and end dates. One reason for this sensitivity is the fact that climate varies a great deal even without the presence of human forcings — and this variability is of course one of the challenges facing the detection of long-term trends, especially for rare events.

For its part, the IPCC AR6 — which summarizes a much broader literature than the two papers cited above — classifies drought into three categories: meteorological, hydrological and agricultural/ecological which emphasize respectively precipitation, streamflow and soil moisture.

With respect to hydrological drought in Western and Central Europe the IPCC could not be stronger in its conclusion:

"in areas of Western and Central Europe and Northern Europe, there is no evidence of changes in the severity of hydrological droughts since 1950"

For hydrological drought the IPCC is also quite strong in its conclusions:

The IPCC lumps WCE in with many other global regions in its conclusion that, “Past increases in agricultural and ecological droughts are found on all continents and several regions” which it expresses with medium confidence, a qualitative judgment which is typically interpreted as about a 50-50 chance of being true.

Looking to the future the IPCC is quite clear that we should not expect to be able to attribute trends in drought to climate change today. The IPCC projects only medium confidence for increases in hydrological agricultural/ecological drought at 2 and 4 degrees C increases in temperature and low confidence for increases in meteorological drought at 2C. In short, the IPCC does not expect that either detection or attribution should occur in 2022, when we are still well below 2C and suggests that it may be many decades before detection and attribution claims can be more strongly supported.

I have stitched together the summary table from IPCC AR6 Chapter 11 on the various metrics of drought and reproduced that below (alternatively, flip to pp. 1689-90 in Chapter 11 of IPCC AR6).

IPCC AR6 summary of it conclusions for various metrics of drought for Western and Central Europe. Source: Chapter 11, 1689-90

In Western and Central Europe — basically Atlantic France all the way to Moscow, north of the Mediterranean region and south of the North Sea region — the IPCC and the underlying peer reviewed research on which it assesses has concluded that drought has not increased and, logically, that increased drought cannot be attributed to human-caused climate change. The only exception here is that the IPCC has medium confidence in an increasing trend of soil moisture deficits in some subregions, however the IPCC has low confidence that this trend can be attributed to human-caused climate change. Looking to future, at temperature changes of 2C and more, at present the IPCC does not expect the current state of scientific understandings to change. But stay tuned — that’s why we do science.