Power and gas prices in Germany more than doubled in just two months, with year-ahead electricity at a blazing 570 Euro per megawatt.  Two years ago, it was 40 euros. It’s summer but electric heaters sales are already up 1000 percent and online searches for Firewood are running hot. In the UK — householders are facing bills in the order of £5000 a year — (like $10,000, after tax) people are described as being in “pre-panic mode” already. Some are starting to turn off freezers, giving up toast and showering every second day. Shops and Pubs are closing, consumer confidence is at an all time record low, the most depressed in the last 48 years consumer confidence has been measured for.

This week’s prices are “unbelievable,” analysts at Energi Danmark wrote in a note. “The rally on the gas and coal market and the very high spot prices we see this week have given the already elevated market further momentum.”

German year-ahead power, a benchmark for Europe, is on a nine-day rising streak. The contract rose 6.1% to a record 570 euros ($573) per megawatt-hour, with French futures jumping as much as 2.8% to 720 euros. Europe year-ahead coal futures hit a record $311.50 a ton, while carbon-emission permits traded at all-time highs. 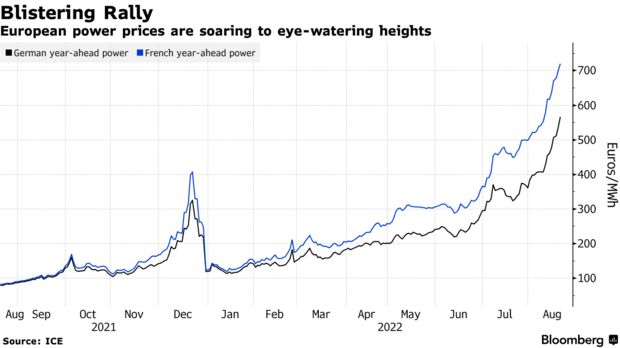 For obvious reasons, Germans are worried about winter already:

Already the media are reporting that electric heaters are flying off the store shelves at an unprecedented rate – in the summertime! For example, online daily The Hamburger Abendblatt here reports: “Electric heater online retailers and DIY stores report explosion in demand – increases of up to 1000 percent.”

“Energy inflation is way more dramatic here than elsewhere,” said Ralf Stoffels, chief executive officer of BIW Isolierstoffe GmbH, a maker of silicone parts for the auto, aerospace and appliance industries. “I fear a gradual de-industrialization of the German economy.”    …there’s evidence that Germany’s industrial position is slipping. In the first six months of this year, the volume of chemical imports rose by about 27% from the same period last year, according to government data analyzed by consultant Oxford Economics. Simultaneously, chemical production fell, with output in June down almost 8% from December.

Welcome to the Clean Green Future in London, 2022

The Victorian lifestyle is making a comeback.

By Jacquelin Magnay, The Australian

People in Cornwall have been turning off their freezers, to the alarm of health officials warning of food poisoning. In Newcastle, food charities have been flooded with requests for non-perishable items that don’t require turning on the stove.

And in London at my house, the hot water has been off for the past month with showering scheduled for immediately after a sweat-inducing run in the park. A neighbour has given up toast and community groups ­advise people to vacuum the backs of their fridges to ensure they work as efficiently as possible and to shower every second day.

A pre-panic mode has struck households across Britain as a cost-of-living crisis approaches uncharted territory.

Easy to see why people might be jittery at these prices. How many houses will burn down when people cook by candlelight?

Energy industry analyst Cornwall Insight forecasts that the British price cap will skyrocket and the average annual bill will reach £3582 ($6177) in October. By January, it predicts it will be £5000 a year. That is close to $10,000, after tax, for an average bill.

Consumer confidence in the UK is at the lowest level since 1974 when it was first measured:

A record-breaking economic gloom is gripping Britain as households brace for a “nightmare” winter of soaring costs.

Consumer confidence has plummeted to its lowest ever level as the Bank of England increases interest rates to counter rocketing inflation, according to a closely watched survey from the data company GfK.

GfK blamed acute concerns over the cost of living for a drop in its confidence index to -44, the lowest it has been since launching in 1974.