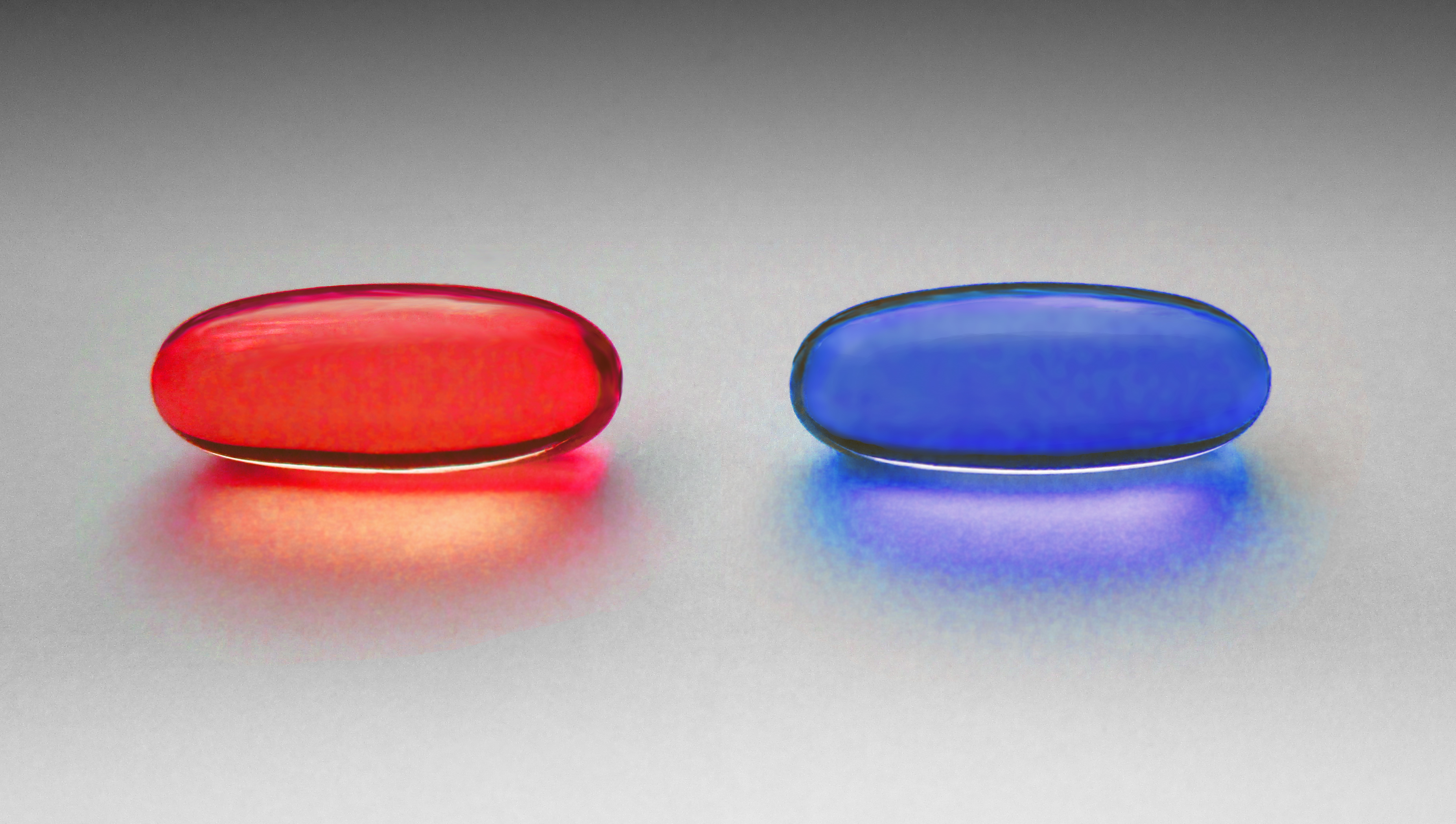 The terms “red pill” and “blue pill” refer to a choice between the willingness to learn a potentially unsettling or life-changing truth by taking the red pill or remaining in contented ignorance with the blue pill. The terms refer to a scene in the 1999 film The Matrix.  Sash Stone applies the metaphor in discussing American perceptions of socio-political reality in her substack article The Raid that Red-Pilled America.  Excerpts in italics with my bolds.

No one who watches Joe and Mika or Rachel Maddow or reads the New York Times will ever be red-pilled. They simply believe that is the only reality. How could it not be if every high-status person in America is going along with it? If your friends and family go along with it, if your social media feed confirms it every day with links. If it’s in the media, it must be true, right? How do you not trust it if it’s on NBC News or the Washington Post?

Waking up to the media’s near-total collapse during the Trump years is a big part of being red-pilled. Once you see it, you can’t unsee it. The only way to escape the media’s hold on the narrative is to cut it out completely, at least until you can see that there is another reality, and very often, the actual truth.

If they hadn’t already given up on the “establishment” by watching them crush Bernie Sanders like a bug in 2016, 2020 would do it. The response to COVID was a big one. Dividing the country the way it did into the compliant and the non-compliant. What it did to businesses, to the minds of children, to everyone who was locked down and locked in – unable to attend funerals, weddings, and death beds.

But the raid on Mar-a-Lago very likely has red-pilled Americans even more, especially when you put it together with the authoritarianism during COVID, the suppression of speech, the silencing of dissent, and the dehumanization we all live with every day.

To watch our Department of Justice raid a former president’s home months before the midterms, where the Democrats were expected to do very badly, looks suspect to anyone. If they were trying to create distrust in our institutions, they succeeded.

Most Americans have seen, maybe for the first time, that our government has become too powerful, too punitive, and too authoritarian in crushing dissenting voices and outsiders who challenge that authority. We call that being red-pilled.

More worrisome is the ongoing mass hysteria that started on Twitter, spread into our institutions of power, and now has spread to our government. To have such a complicit and compliant media is even more terrifying. What wouldn’t they go along with by now? Gulags?

We all thought “cancel culture” would be confined to social media but clearly it has become the modus operandi for our establishment government. It’s hard not see this as yet another extension of the insanity and hysteria over Trump.

The Mar-a-Lago raid on its own would have one thing. But it comes right after Merrick Garland announced the “largest investigation in American history” against a former president. That came on the heels of prime-time hearings that aired on every news network except Fox, led by Liz Cheney, where they compared January 6th to the end of slavery and the Jim Crow South. This, after Kamala Harris, compared January 6th to Pearl Harbor and 9/11.

A red-pilled America is probably starting to think the reaction to Trump, rather than Trump himself, might be the even bigger threat.

Instead of bringing more voters in, the administrative state has now red-pilled even more Americans. . . It’s likely that many of these voters agree with Rep. Mayra Flores (R-Texas) who responded to the Mar-a-Lago search thus: “The FBI raid on the residence of the former POTUS is unprecedented. We do not live in a third world country.”

Whether the newly red-pilled Americans will become GOP voters or whether they will support Trump at all remains an open question. But many of them will be coming out of August 8th with a high distrust for a government that would use the Department of Justice to sabotage its political enemies.

The media has long since lost touch with reality.

They listen to Twitter, not the American public. For too long now, the Biden administration has been taking its cues from the wrong people. They think if it makes Joy Behar happy, it’s worth doing. They think it’s the right move if Rob Reiner approves on Twitter. Twitter is a small pond with way too many big fish driving ongoing hysteria and preventing the Democrats from focusing on the problems of average Americans.

Chasing Trump for six years based on one mass hysteria event after another has destroyed the Democratic Party and possibly our Department of Justice. Just because they can indict Trump on some procedural error doesn’t mean they should.

The problem with mass hysteria is that it often leads to the dehumanization of whole groups of people. While most see it as more of a physical affliction, like coughing fits or laughing disease, it can also work when a threat spreads quickly in a tight-knit community. Think about a snake slithering into a tent. The more who are connected, the faster the hysteria spreads.

The hysteria only ends when they’ve gotten rid of the bad thing. That is why we watched person after person purged and persecuted from their jobs, Hollywood, and social media all through the Trump years, a practice that continues to this day. In 2016 there are more people online and connected than ever before. In 2020, even more people were online and connected.

There were no real witches in Salem, America is not corrupt to its core with “white supremacy,” and Trump is not an omnipotent Super Villain. We’re all just human beings, flaws and all. Trump is still the same gadfly from the 1980s whose fame revolved around his opulent lifestyle.

There is nothing left of the Trump hunters. They have been destroyed by their addiction. It defines who they are now and defines what they are. For people who have everything – money, culture, art museums, every major corporation in the country, all Big Tech platforms were undone by their need to destroy one man.

Americans are looking at the January 6th committee hearings, and now, with the raid on Mar-a-Lago and thinking, do they not trust their own candidates or policies to win in November? Why are they so worried the people will vote for Trump instead? Shouldn’t they be fixing themselves rather than trying to take out their opponent before he’s even announced he’s running?

I never thought anything could shake my faith and loyalty to the Democratic Party. I trusted them. I believed in them. That doesn’t mean I think the Republican Party is any better, but they don’t control everything as the Democrats do.

They will probably indict Trump. That will mark the last gasp of their collapsing empire. The red pills will be eaten like candy. No American will ever see them the same way again.

I am not MAGA. I am not a Conservative. My friends and family do not understand why I care about Trump and his supporters. They want me to join them in their hatred. They want me to be inside the same group hysteria as they are. I know where they’re coming from. I used to be among them. I did everything they’re doing now.

But the red pill is a powerful one. Once you find your way out of the bubble of hysteria on the Left, it feels more like normal life. People are people again. And that, my friends, is worth waking up for.