Blistering high prices flow through the interconnectors too.

The energy price cap in the UK is now predicted to reach the £6,552 in April. Pretty soon only the Royal family will be able to afford electricity. If this continues, inflation in the UK may hit 18% by January.

As Javier Blas says: Day-ahead electricity prices in Europe are eye-watering, with lots of countries setting record highs for today. Notable to see the Nordics close to €400 per MWh, and Germany at €600. Before 2020, anything above €75-100 was considered expensive

It doesn’t matter who has the wind turbines, and who has the coal or nuclear power, everyone connected to junk generators gets expensive electricity. Denmark has more “free” wind power than nearly anywhere in the world but they are still paying €600+.

Meanwhile the German Energy Minister has decided he really should close the last three nuclear plants. Apparently it would only save 4% of their total gas bills, he says, not the 15% they need — like turning down a jerry can of fuel because it won’t fill the whole tank. I guess he’s not the one having cold showers.

Imagine how different it would be if low carbon fuel sources could actually save the world?

All the countries around Germany are feeling burned:

The EU’s eastern members, from Poland to Romania and Slovakia, are especially annoyed. They spent decades urging Germany not to make itself dependent on Russian gas and vulnerable to Putin’s blackmail. The Germans either ignored them or smugly lectured them on Kremlinology, refusing to acknowledge any connection between their policies on Russia, gas and fission.

Let’s hope it’s just a cult, and not a plan:

What many foreigners don’t appreciate, however, is that the German controversy is less a policy debate than a religious war — not unlike the American debates about guns or abortion, say. Many Germans have spent their entire lives protesting against the splitting of atoms.

This is what a historic international crisis looks like. 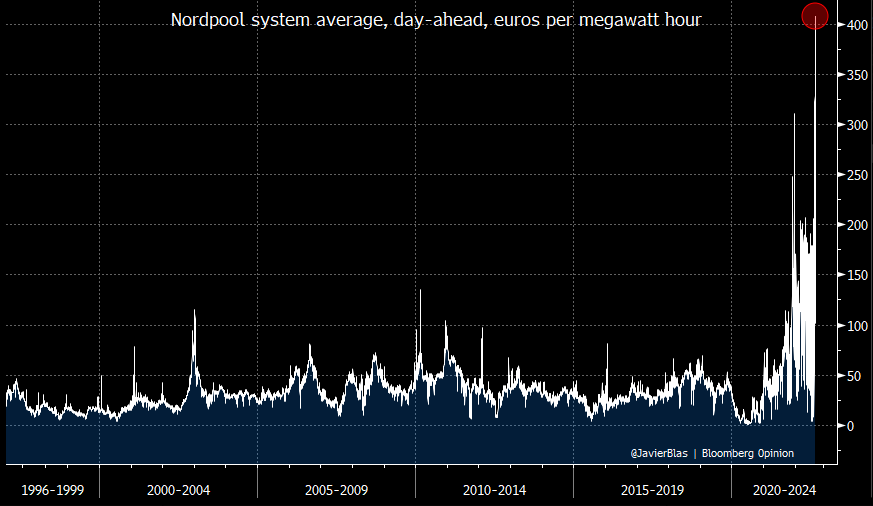 MAP OF THE DAY: Day-ahead electricity prices in Europe are eye-watering, with lots of countries setting record highs for today. Notable to see the Nordics close to €400 per MWh, and Germany at €600. Before 2020, anything above €75-100 was considered expensive| #EnergyCrisis pic.twitter.com/RyTrbJ4Mxl

From the Daily Mail: “‘The nervousness of the market appears to increase day by day as we edge closer to winter delivery, now just five weeks away, and no big positive news on the horizon,’ Auxilione said.”