A new paper shows Germany excess deaths seem to hit the working age crowd harder than the old and the young in 2021, but not in 2020. The Delta variant did arrive in 2021 with a higher mortality rate. While Germany listed about 30,000 deaths to Covid in 2020, there were 80,000 deaths in 2021. But that should have raised the excess death rates in the oldest age groups more than the working age group. 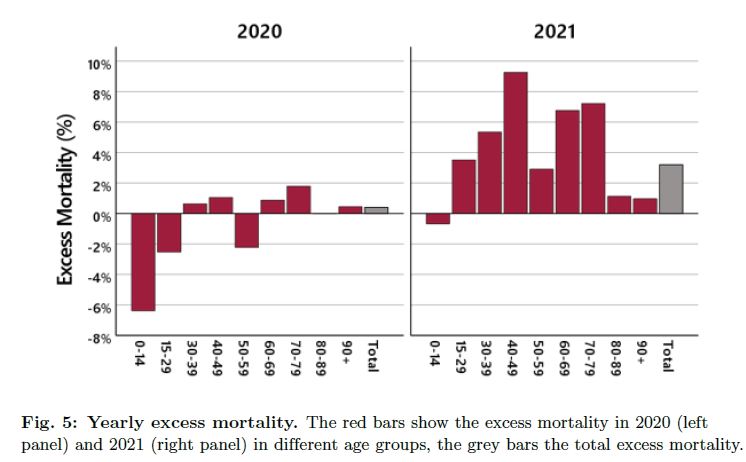 Viruses usually kill the very young or the very old, not the people in the middle.

This sort of actuarial data is notoriously complicated to unpack.  But there is a clear rise in unexpected deaths at the same time as the medical experiments that also peaked in April, June, and December of 2021. As Kuhbandner and Reitzner point out, excess deaths appear to rise with the timing of vaccination doses, especially the first and the third. 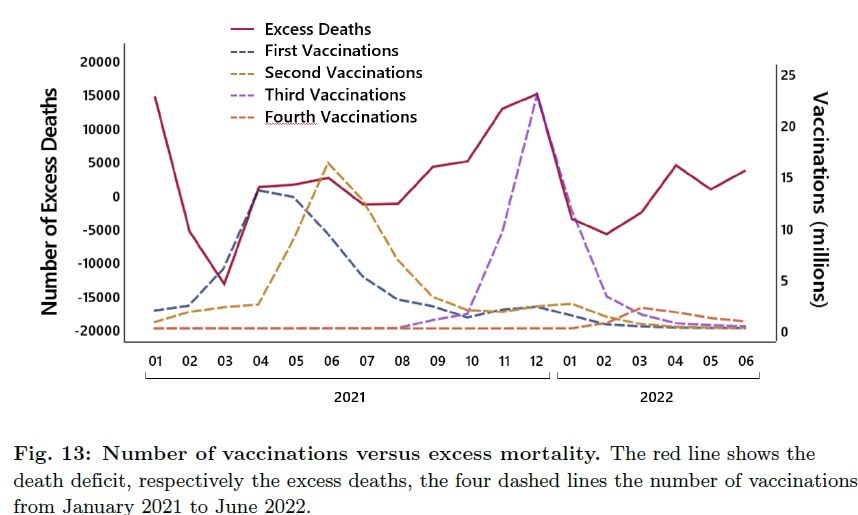 Furthermore, peak vaccinations for the under 30s was delayed til June, which is when their excess deaths peaked

For most of the first year and a half of the pandemic the excess mortality in the youngest cohort aged 0-29 was so low it was negative.   They died less often than expected. But their vaccination program didn’t peak until June 2021, which was the same month that excess death in young people rose to 13% higher than expected (see table 8.5 in the paper).

Wrapped under those numbers are the awful losses of people taken far too young. Of families with empty spaces that can’t be filled.  Where are the government reports and the media grillings for starters?

The German graphs look eerily similar to the Neil and Fenton et al study in the UK:

Strangely, the unvaccinated are more likely to die a couple of weeks after their cohort gets their first dose of the vaccine?

The Neil and Fenton study would still be my Go-To study for the cause effect link. It was more detailed, higher resolution data and could be analysed in ten year age-grouping. It had vaccination rates and dates for each group and on a high resolution weekly spacing where the lags after vaccination rates peaked were spookily clear. (Remember that in the UK data people don’t count as “vaccinated” until two weeks after their injection, and so we see the mortality peak hit the “unvaccinated” people hardest just after vaccinations peaked in their age group. It was kind of like a quantum entanglement effect in medicine.)

Most lamentably, what this really means is that German data is just confirming what we’ve known all along now since before Christmas. Namely that there was something very risky potentially about that mass medical experiment. But the government hasn’t put a halt to it. The drugs were not withdrawn. Warnings were never issued and nobody even bothered to just raise a red flag and make sure everyone knew what happening.

There was a definition change in Germany in 2018, so these are only three year trends — and a bit too short to be meaningful. Note also the graph scales exaggerate the changes. What it does show is that for most of 2021 in Germany there were perhaps 100 more stillbirths each month than might have been expected based on data from 2019 and 2020. That’s a tiny fraction out of nearly 200,000 births each month.

More importantly, total births fell by 15,000 or so in Quarter one of 2022, which would be nine months after the vaccination campaign began. 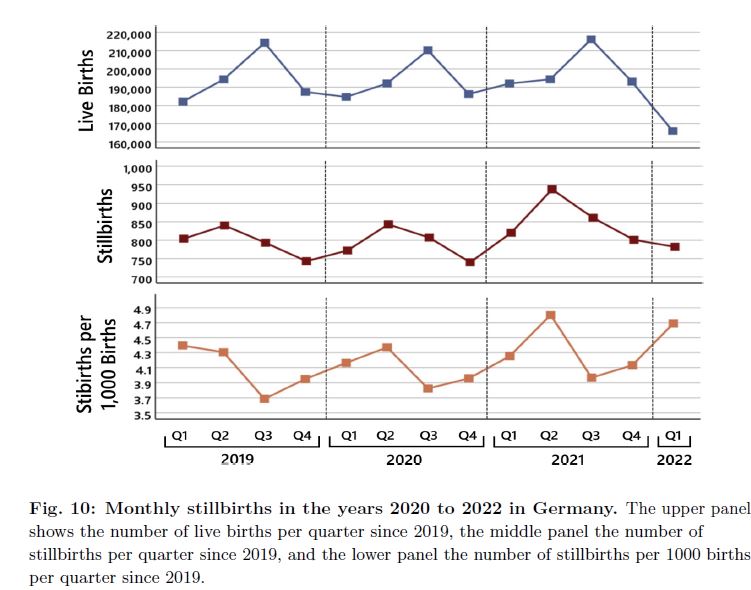 Here’s hoping that is just a temporary drop.

One thought on “Excess deaths rise in Germany too, peaking in the same months medical experiments peak”