In a surprise to no one, descendants of plants that survived 350 million years of climate extremes, volcanoes, meteor impacts, mass extinction events and ice ages seem able to cope with moderate modern weather. Not only that, places where the weather varied a lot in the 1960s are still like that, and the plants that liked those conditions still like those conditions. I mean, really, give me your money.

Does this mean we can protect forests of the future by creating climate variability now? 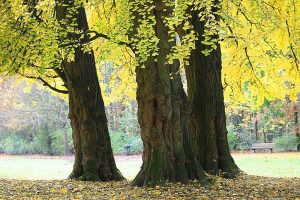 Close relatives of Gincko Biloba trees have been around for nearly 200 million years. | Photo Jean-Pol Grandmont |

A new study out today in the first issue of Environmental Research: Ecology assessed effects of past and current climate variability on global forest productivity. The work highlights sensitive regions where forests may be most at risk as the planet warms and temperatures become more extreme. The framework can help set conservation priorities, support forest adaptation efforts, and improve carbon accounting.

Lead author Winslow Hansen, a forest ecologist at Cary Institute of Ecosystem Studies, says that “global climate patterns are becoming increasingly variable. This means more extremes, which threaten forest health and productivity. They say adversity makes you stronger. Here, we were essentially testing that adage for trees. Are forested regions that experienced more variable conditions in the past better prepared to tolerate variable climate now and in the future?”

They found that regions where temperature was more variable in the past continue to experience more temperature variability today. Forests in these regions tend to better tolerate this increasing variability.

Sometime around 360 million years ago plants got very good at sucking CO2 out of the sky and they never looked back even though temperatures varied by 15 degrees Celsius. Tell the children…

Geocraft — Late Carboniferous to Early Permian time (315 mya — 270 mya) is the only time period in the last 600 million years when both atmospheric CO2 and temperatures were as low as they are today (Quaternary Period ). Temperature after C.R. Scotese. CO2 after R.A. Berner, 2001 (GEOCARB III)